‘Over-indexing on brand safety’: Trump is a boon for traffic, but advertisers remain wary 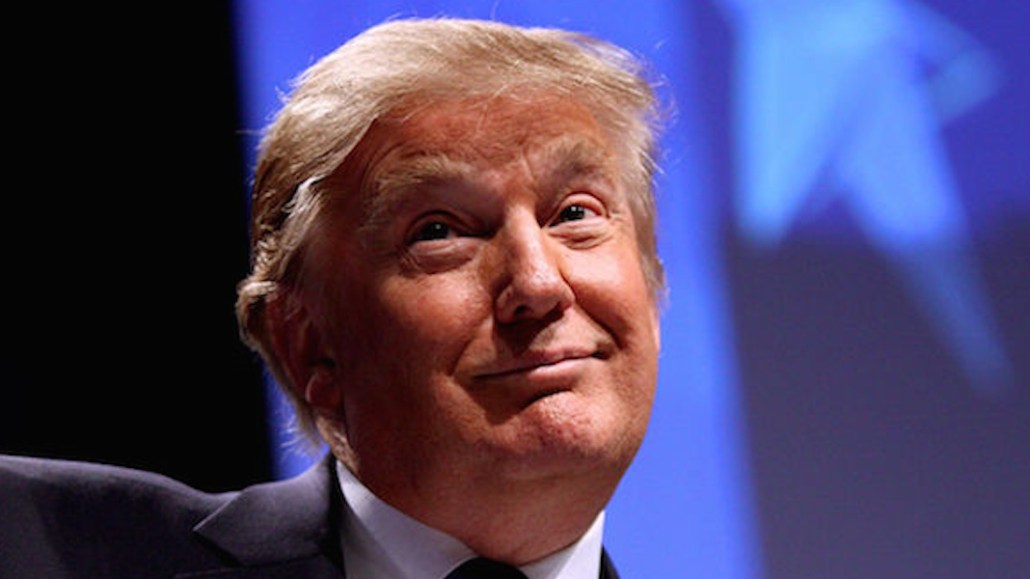 It’s a continued trend that many thought may die down after the election and the fervor of Inauguration Day. As Digiday reported in January, clients were asking buyers to keep their brands away from Trump news. This was new: Advertisers that normally were OK buying space around news and politics were sitting out the inauguration and Trump.

But the news cycle around Trump and politics continues to be rocky.

Oscar Garza, global director of media activation at Essence, who said in January that advertisers were “being careful” about politics, said that while things have slightly mellowed, brands are still asking if they should stay away from political news.

One media buyer who is running campaigns for a few consumer-goods brands said that he’s had some meetings with clients about their approaches to buying ads around news. It came from the understanding that if, for example, the brand decided to add an alt-right site to its blacklist, it then could also extend them to other extreme left-wing sites. After that, it ends up just being all political things. “It’s not a bad idea.” This buyer is focusing now on sites that do lifestyle content mostly: “Just avoid the whole issue.”

It’s an interesting Catch-22. For certain publishers, traffic has never been as high as it is now — it’s an exciting, rollicking time in politics, leading to record audiences that any brand would want to get in on. But increasingly, many are choosing to stay away from controversy entirely.

Gretchen Tibbits, president at LittleThings, which has never done politics or news, said that positioning is proving “beneficial” as a brand. “We’ve always said we provide a respite.” Tibbits said advertisers — the publisher’s current clients include Dunkin Donuts, Crisco and Eggland’s Best — are more concerned with not being around politics.

It’s not just about Trump per se. For example, one business-to-business client saw ads near news about the Federal Communications Commission voting to halt internet privacy rules that impose data regulators on broadband providers. The client didn’t want to be around privacy news because it was “so negative.” A travel brand also didn’t want to be around news of the administration’s travel ban.

According to a new report released Tuesday from Bloomberg Intelligence, there are hints that brands and buyers are going to go for safer, staider and more predictable advertising environments. Media analyst Tal Smoller said that the proliferation of fake news can spur readers to subscribe to more well-known, established news sources. At the same time, more predictable content is also more appetizing to brands that are “re-evaluating their digital ad spending on social media.”

“As brands re-evaluate their digital-advertising strategies, publishers may have an opportunity to grab a greater share of ad spending for their websites and apps. Following revelations of ad placements alongside inappropriate content on Google’s YouTube, and the advent of fake news on Facebook, publishers’ arguably more controlled, predictable content may prove a safe haven for brands,” said Smoller.

Put it another way: “The industry is over-indexing on brand safety right now,” said one executive.