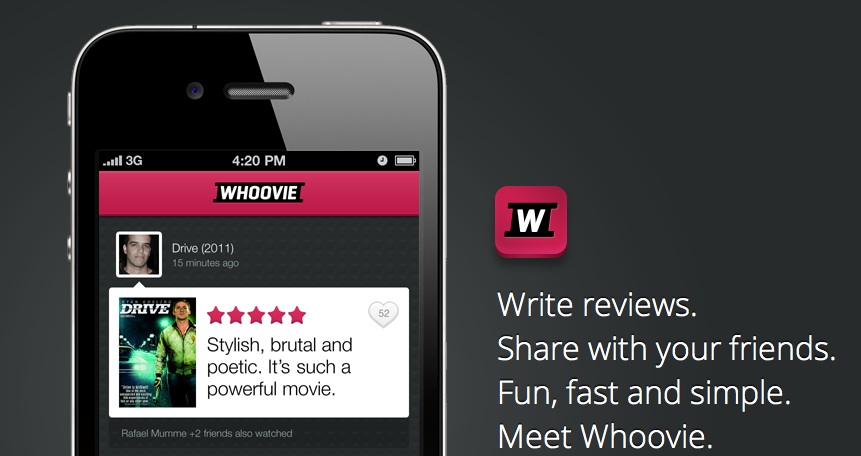 Agencies are home to the most highly creative people in digital media. In our ongoing “On the Side” series, we highlight those working on interesting digital media projects. If you have one or know of one, please contact me at the email below.

Thadeu Morgado, design lead at digital agency Huge, says his favorite recent movie is “Drive,” while Huge’s lead product developer Rafael Mumme says his is “Midnight in Paris.” For both of these digital creatives, it’s much more interesting to hear what their friends are saying about movies rather than the critics. That is the idea behind their new social movie app Whoovie.

Yes, movie apps are dime a dozen, and there are plenty of sources for movie reviews. But Morgado and Mumme think that Whoovie is different.

“Whoovie is about your friends,” said Thadeu, who is design lead at Huge. “It’s about the conversation you naturally have with your friends around movies, but sometimes you just don’t have the time for it. We believe that collecting this conversation and connecting people around this is really powerful.”

Some cool features include the ability to browse movies, and from the movie page, you can watch trailers: “You can watch a trailer using YouTube, check if it’s available on Netflix and Amazon or simply add to your Watchlist to keep track of everything you want to watch,” said Mumme.  Also, fear not if you have certain friends whose taste in films you don’t particularly appreciate — oh, I don’t know, like that friend who said that “Bridesmaids” wasn’t funny (there is something wrong with that person). According to Mumme, they are working on a feature that will let you filter out certain people’s reviews that you are not interested in.

Whoovie is available for free download on the Apple App Store.