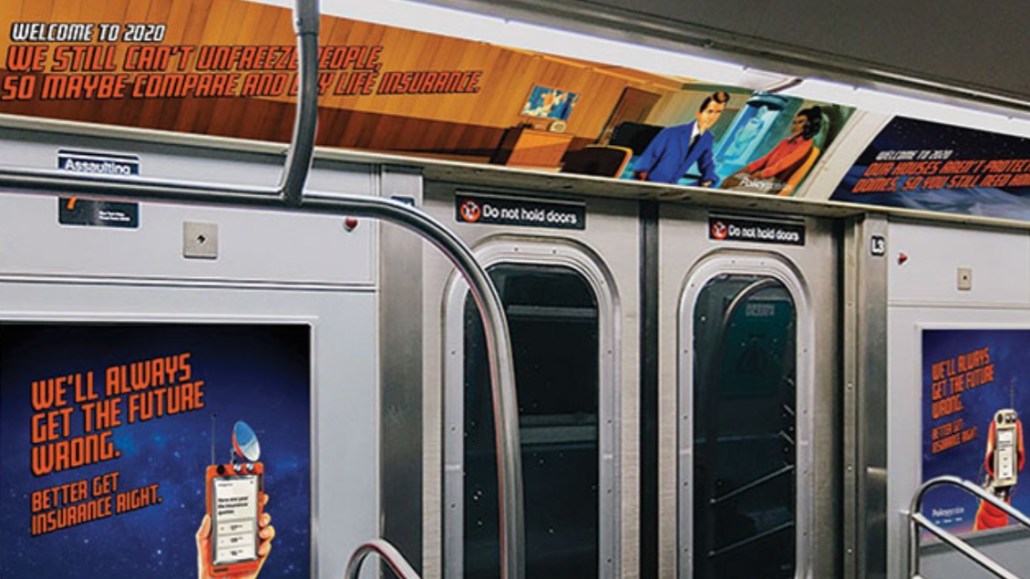 For Policygenius, a 6-year-old insurance marketplace start-up, building its own in-house creative team over the past two years has changed the company’s approach to paid media. Policygenius, which lets consumers compare the rates of policies offered by insurers, also manages most of its paid media assignments with another in-house team.

This arrangement has enabled all the in-house marketing folks to figure out jointly which paid media placements will work best in a creative sense, instead of having the creative team craft creative work based on the type of paid media already purchased. The new approach runs counter to what Policygenius’ creative director, John Downing, witnessed during his 12 years of working at agencies.

“We very rarely got to have any sort of influence over a media buy,” Downing recalled. Today at Policygenius, “pretty much every campaign that we do is influenced” by the fact that our creative team is in-house, he said. “Most companies buy the media and then brief the team. By having our in-house team, we’re able to discuss the pros and cons creatively of the media buy that we might make.”

For example, Policygenius purchases subway ads more often than highway billboards because its creative team believes the subway advertising delivers better “storytelling and explanation” than a highway billboard, Downing said. He said his company also favors placements on podcasts for their storytelling capabilities. In December, Policygenius debuted in New York City the latest campaign by its in-house creative team, with a total of 500 ads, including some sprawling across half of a subway car as well as video panels. Plus, Policygenius placed ads on more than 80 podcasts. “The creative team is able to bring a lot of those insights to the acquisitions team before we make those purchases,” Downing said.

If the in-house acquisitions or marketing team is scoping out a new media buy, it enlists the creative team as a sounding board, asking, “If we’re able to buy this type of media would you want it?” said Policygenius’ chief marketing officer, Jonathan Metrick. “It also helps from a startup perspective to be very nimble and quick to move on opportunities as they pop up that a bigger company might not be able to seize,” added Metrick, who previously held marketing positions at Procter & Gamble and Live Nation.

Policygenius declined to tell Digiday exactly how it divides up its media budget but did say that it relies on a “diversified marketing mix,” including organic search, podcast, television, paid social media, paid search and out-of-home advertising. Over 2019’s first 10 months, the company spent $8.9 million on paid media, a rise from the $5.9 million it spent over the same time period in 2018, according to Kantar. (Spending on social media is not tracked by Kantar.)

Currently, Policygenius’ in-house creative team includes a copywriter, an art director, an executive producer, a designer and an illustrator. The company expects to add to the team this year but declined to specify how many individuals. “We need to staff up accordingly as our budgets increase,” Metrick said. “As we’re growing the business, we’re growing the teams across the organization accordingly.”

Managing the creative function and the media operation in-house (through acquisitions and performance teams) has been crucial to the company’s growth, according to Metrick. This way the company is freed up from having to oversee agency reviews or update agency partners on any new capabilities since the in-house team is already aware of what’s coming. “When you’re rapidly scaling, constantly doing agency reviews or getting agencies in the door” can be difficult, Metrick said. “It’s a huge advantage to have folks already dialed in executionally and to have a much deeper knowledge of what we’re doing.”

Policygenius isn’t alone. In-house creative teams have become more popular in recent years, especially among startups and direct-to-consumer businesses; these companies believe this arrangement helps them operate faster, be more nimble and provide them more control over their marketing. That said, Metrick and Downing have worked with external agency partners on various Policygenius executions or projects and expect to continue to do so. “We might use one-off external agencies but the core structural nuts and bolts sits with the company,” Metrick noted.

Using a hybrid model of tapping agencies as needed as well as an in-house team makes sense for a company like Policygenius, according to Metric Digital CEO Kevin Simonson. “There is no [one]-size-fits-all solution for any company, large or small, when it comes to an agency and/or in-house arrangement on paid media,” wrote Simonson in an email, adding that companies that recognize an area where they lack experience often work with agencies.