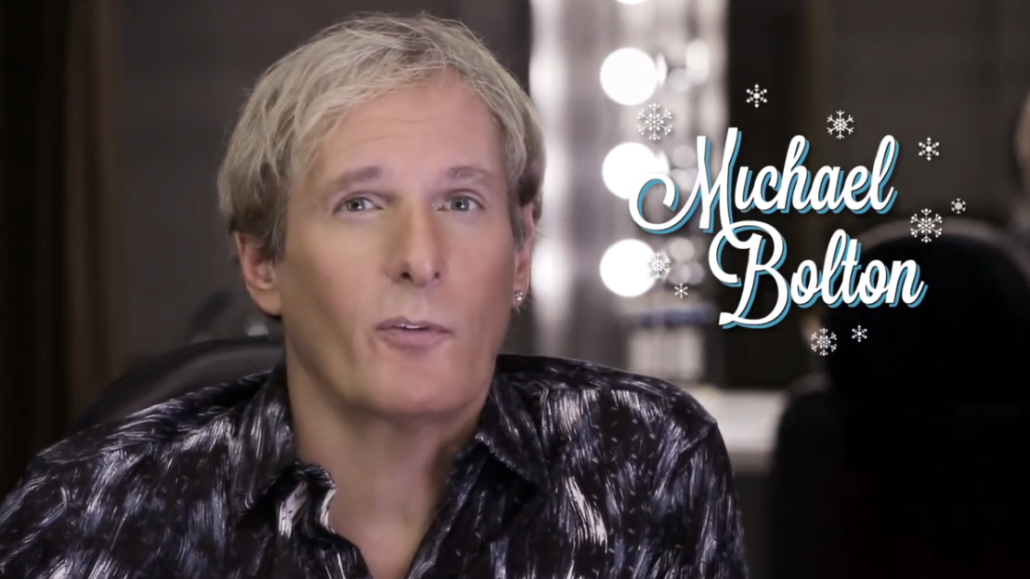 Honda isn’t afraid to go where the young people are (cough, the Internet, cough) and take a dip in the cool waters of social media. The automaker has tried Snapchat for Acura, its higher-end vehicle division, maintains a tumblr and today will be launching a Vine campaign, “Happy Honda Days,” featuring Michael Bolton singing personalized greetings from a giant holiday card.

“Happy Honda Days” is meant to be funny, and winkingly ironic. The botoxed balladeer will appear in six TV spots singing silly, tongue-in-cheek holiday songs. As a social element of the campaign, people are invited to send personalized messages from Bolton to their loved ones. Submissions will be posted across Honda’s Facebook, Twitter and Instagram channels with the hashtag #XOXOBolton.

According to Alicia Jones, the manager in charge of Honda and Acura’s social marketing, the automaker is simply looking to improve engagement numbers for the season and create positive sentiment, which they believe in turn drives customer loyalty.

“When we have a major campaign running, like with ‘Happy Honda Days,’ not only just social media, variety of different media — we’ll look at how that impacted on sales for that particular month,” said Jones. “Though with social media, we’re definitely trying to reach the younger generation — that’s the majority of who’s participating.”

It’s notable that Honda’s Acura division decided to use Snapchat as a place to market, since Snapchat’s audience is generally an arena for youngsters. And while “Happy Honda Days” is looking to capture a wide audience, using Vine to send personalized greetings may not be for a less tech-savvy boomer generation. The Honda Fit, Jones mentioned, generally sells to a younger audience, though; the entire event isn’t looking to push any specific model, or demographic.

Still, since the car industry relies on independent dealers, it’s difficult to connect the dots between social media engagement and sales.

“If we post a link to the build and price of vehicle on the Honda website or the ‘Find A Dealer’ link, we find these to be indicators of the lower funnel,” said Jones. “Though, as we don’t have a product that we sell online, like an online retailer, it’s harder for us to measure the impact of social.”

Acura isn’t the only carmaker going social with the aim of appealing to younger generations. Others like Chevy, Nissan and Toyota are attempting to interact with customers and fans to varying degrees of success. Car brands have joined Instagram en masse, where some brands have experimented with content. Lexus, for example, stitched together crowdsourced videos of loyal fans showing off their cars on Instagram video. VW teamed up with Google Plus so that over-sharing millennials could drive and take photos at the same time.

If all of this seems a little desperate, that’s because it is: New car sales between the ages 21 and 34 have been declining for 30 years. Generation Y accounted for just 27 percent of all vehicles sold in 2012, down from 38 percent in 1985, according to CNW Research. There were fewer licensed 18-year-olds in the United States in 2008 than there were 70-year-olds.

Enter Michael Bolton. Jones told Digiday that the crooner will be doing as many greetings as he can for “Happy Honda Days,” though they can’t guarantee that he’ll be able to sing to everyone. That would be a nice problem for both Honda and Bolton to have.