Hello Moto: Inside Motorola’s latest campaign for its smartwatch 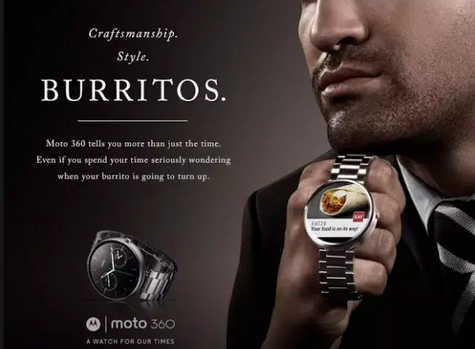 Moto 360 — Motorola’s new smartwatch — has the sleekness, elegance and sophistication one would expect of a luxury watch. But at the center of the first, cheeky campaign for the watch is what it can do, not how it looks.

The campaign, “A Watch for Our Times,” in partnership with agency Droga5, showcases the Android-powered watch in four spots that parody the clichés associated with opulent luxury watch ads. The watch came out in September, though the campaign is just being rolled out now. Motorola was acquired by Lenovo in October, after nearly two years under Google’s wing.

One of the new spots begins like a typical luxury watch ad: a model-handsome business man is doing handsome business things as the voice-over announces, importantly, “Craftsmanship. Style … Burritos.” A burrito flashes on his watch, reminding him that it’s time for lunch. The three other spots in circulation similarly lampoon the self-seriousness of the category. Two more will be released this week.

“We were all too aware of how the watch category had been positioning itself for decades and distancing itself from real people: If you weren’t a fighter pilot, or conquering the seven seas, floating in a space station or had just won the US Masters, then the watch world felt completely inaccessible,” Nathan Lennon, the creative director of the campaign, told Digiday. “It was time to call out the category in a tongue-in-cheek ‘Moto’ way and show that Moto 360 was relevant, and the way we talked about it was also relevant.”

The spots and still images are being shared on the brand’s various digital platforms including Faecbook, Instagram, Twitter, Google Plus, YouTube and TubeMogul. Motorola is also using paid media, influencers and the hashtag #forourtimes on its social platforms to promote its timepiece.

The campaign marks the smartphone-maker’s first foray into the wearable technology sector, beating to market the Apple Watch and Timex’s Ironman One GPS+, just in time for the holidays.

“As core enabling technologies get small enough to enable truly wearable products, the challenge for companies is how to deliver compelling, meaningful, beautifully designed products that feel like they’re meant to be a part of their everyday,” Dickon Isaacs, consumer experience design director at Motorola, said. “The unique cultural, design and engineering challenges in wearable products are informing our development for the core part of our business.”

Jan Dawson, chief analyst at Jackdaw Research, acknowledged that the wearable technology space was indeed becoming a crowded one, despite just getting off the ground. And it looks like the space will only get even more cluttered, with Business Insider reporting that Intel is set to announce a smartwatch with luxury Swiss watchmaker Tag Heuer next year.

“Computing is moving from our pockets to our wrists. While it’ll take a couple of years for that vision to be realized, none of these companies want to miss out,” Dawson told Digiday. “Everyone is hoping that the Apple Watch will transform the category, as Apple is seen to be the revolutionizing force. All the first-mover companies will also benefit, since they are Android powered, and that still remains the dominant player.”