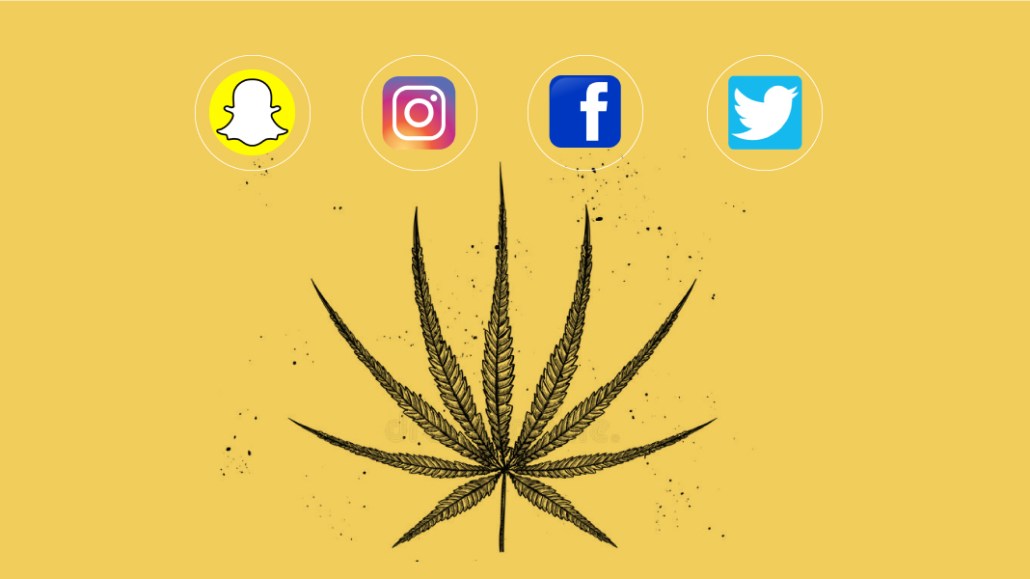 Facebook would seem an ideal place for cannabis-related businesses to find new customers, offering an array of targeting techniques. But Facebook, along with other major platforms, doesn’t take ads for cannabis products. That isn’t stopping many cannabis businesses, which use various hacks to get around the bans.

Some cannabis companies are paying influencers to spread the word about their topicals, edibles and other weed products. Others are working directly with publishers to use their social credibility or are creating fake pages to test what kind of ad content will fly. The result: These niche businesses are playing something of a cat-and-mouse game with Facebook and other platforms, seeing what they can get away with.

Cannabis company Kiva Confections, for instance, is making its first push into influencer marketing with hopes that it will sort out its own sordid history on social media. Because of product-focused ads, Kiva’s Instagram page has been shut down eight times since 2015. As a consequence, the company has lost 60,000 followers and had to change its Instagram handle every time. What was once @kivaconfections is now @teamkiva1, a handle much harder to discover in search. And while Kiva has 10,400 followers on Twitter, it only has 5,500 followers on Instagram.

Christie Strong, marketing communications manager at Kiva, said Kiva has tried various approaches to prolong its stay on Instagram, such as making its Instagram profile private, not advertising prices and making sure it doesn’t provide ways for users to order products directly from the page, but to no avail. Now, while the company’s products have come up organically thanks to celebrities like Sarah Silverman and Charlize Theron, it plans to reach out to wellness influencers who Strong said are “emerging as the informal authority on cannabis,” as the company expands to states beyond weed-friendly California, Arizona, Nevada and Illinois.

“Individuals can share with impunity, which means influencers are in the unique position to share products they are passionate about without fear of getting shut down as a business would,” said Strong, adding that several influencer partnerships are in progress.

Another strategy involves working with publishers on branded content, which can still be shared to social media since the content is editorial and not strictly promotional. That’s precisely why Nevada-based cannabis company Caviar Gold worked with cannabis news site Herb on a video that advertises its range of flavored products, which was posted to Herb’s Facebook account that has almost 10 million followers. Krista Whitley, founder and CEO of marketing agency Social Media Unicorn and cannabis company, Altitude Products, which worked with Caviar Gold on the video and also works with cannabis companies like Whoopi Goldberg’s Whoopi & Maya as well as skin care companies Bella and Felix & Ambrosia, said it’s a tactic that has always worked on Facebook, even before the platform began tightening its control of weed ads in the summer of 2016.

But there are also various nuanced ways cannabis companies get their paid ads through on social without getting penalized, and it comes down to the language and media used in the posts.

Delivery service greenRush has discovered a stealthy way to continue to use social to its advantage. Mike Schwarz, CMO of greenRush, said the company creates fake Facebook and Instagram pages to test which ad content will be allowed. His advice: “Don’t test on your own page — it could be gone the next day.”

In doing so, greenRush found that the more generic the content, the better. “It’s about creating content that appeals to cannabis consumers, without explicitly offering them weed to purchase,” Schwarz said. “You can target cannabis consumers; you can brand to them. You just can’t directly solicit their business.”

For instance, on April 21, greenRush posted a Facebook ad with a video from a 4/20 event greenRush sponsored the day before, with only a comment reading, “What did you get up to yesterday?” That post, said Schwarz, will not be taken down because it does not explicitly try to sell weed. Next, greenRush will see who engaged with the post and send them more promotional, product-related messages over Facebook Messenger, where Facebook’s algorithms cannot as easily pick up illicit activity, said Schwarz.

The platforms themselves aren’t exactly clear what kind of content they will accept. Their policies tend to be blanket statements. Facebook’s, for instance, reads: “Ads must not promote the sale or use of illegal, prescription, or recreational drugs.” However, ads with educational or advocacy content is fine.

“[Platforms] are so vague about what we can do,” said Olivia Mannix, CEO and founder of cannabis marketing agency Cannabrand. Mannix said the agency has gotten away with a few sponsored posts in the past that promote products, although she said it avoids using language in posts that references cannabis so “algorithms don’t crawl the ad.” “We even talk to [Facebook’s] corporate team, and it’s really hard to get any answers.” Mannix points to the response Cannabrand received from Facebook after the agency inquired about its inactive ad account, which the platform shut down two weeks ago because of a sponsored post placed on behalf of client Mary Jane’s Medicinals. The ad was for cannabis-infused topicals that don’t get users high, but that didn’t matter. Cannabrand’s ad account is still on lockdown. “That’s why we have to be strategic,” Mannix said.

Meanwhile, social media platforms like Weedmaps and MassRoots, which cater exclusively to marijuana enthusiasts, have emerged, ready to take the ad dollars that Facebook, Instagram and others are so ready to give up. However, platforms like MassRoots also have much smaller audiences that already frequently consume cannabis, which is why Altitude Products still plugs away on Facebook, where it can find broad reach — at least for a short period of time, said Whitley. Even with Facebook blocking Altitude Products’ paid ads every two or three days, the agency still tries to “push those boundaries” because it’s worth the impressions its ads receive before Facebook’s algorithm pulls them down.