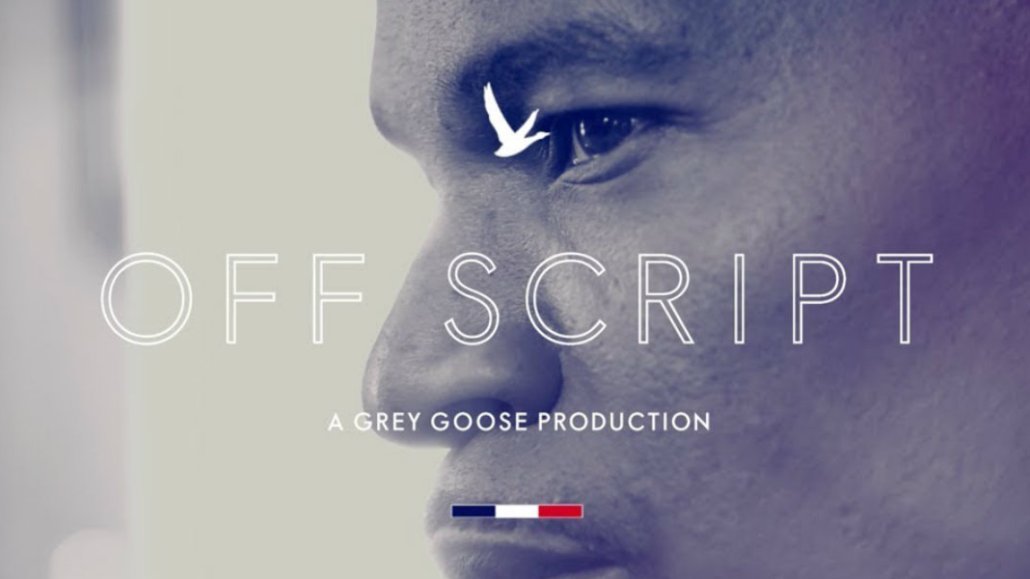 “Off Script,” which premiered May 4, follows Foxx as he interviews other A-list celebrities, including Denzel Washington, Dwayne “The Rock” Johnson and Melissa McCarthy. The series is labeled a Grey Goose production and was developed by its executives in charge of creative development and culture.

Grey Goose’s goal was to create a digital show about film and acting — the vodka maker has had a long history in Hollywood and filmmaking, being a frequent sponsor of marquee festivals in Sundance and Toronto, as well as the Sundance TV series “Iconoclasts” — but made for digital and social platforms.

In doing so, Grey Goose opted for a production and distribution model reminiscent of what’s frequently seen in the entertainment industry. Instead of having just one publisher pitch an idea for a branded show, produce that show and then distribute it on its own channels, or Grey Goose producing the show itself, building a hub and then buying media to drive people to the hub, Grey Goose sought multiple distribution partners for “Off Script.” The marketer developed and produced the show with Jash, a production studio whose executives have a long background in making talk shows, including “Jimmy Kimmel Live.” Oath and Group Nine Media are publishing and distributing the series.

“The objective for us was to create great content, but also change the model a bit — [going from] a model that was about brand content being interruptive and changing it to a model where we can actually create entertainment content,” said Yann Marois, global vp and CMO of Grey Goose Vodka. “We went out to top players in the world of digital and social and pitched it as almost what you would do with a TV show, with an opportunity and an option of exclusivity [for the distributors].”

Marois wouldn’t say which other publishing companies “Off Script” was pitched to, but said the marketer went wide seeking partners.

“Oath is the second-largest digital media group and has extremely compelling targeting capabilities that allow us to bring the show to viewers with a high affinity for this type of content,” said Marois. “Group Nine is compelling because it’s one of the largest content creators on social media, and they really have an expertise in terms of distributing this type of longer-form content on platforms.”

“We were sensitive in distributing this type of branded content in a way that feels natural for the audience,” said Christa Carone, president of Group Nine Media. “Thrillist has a big focus on food, travel, adventure and the notion that our audience is always looking for better things to do; and NowThis, which works with studios out in LA to bring their trailers to our audience, has a big focus on entertainment. It was a natural alignment.”

As Marois said, Oath has the digital publishing exclusivity on the show, and NowThis has the social exclusivity — but as a piece of “intellectual property,” “Off Script” remains owned by Grey Goose.

“The whole process of moving the show from production company to distribution partner is essentially how TV works,” said Alan Wolk, lead analyst for consulting firm TVRev. “In the ’50s and early ’60s, ad agencies would actually ideate TV shows and get them produced by sponsors. This is an almost identical model.”

When it came to picking distribution partners, it helped that Group Nine Media now owns Jash, said Marois. (Jash, which brought in Foxx to star in and host the show, became the production partner for “Off Script” prior to Jash’s sale to Group Nine.) Oath, meanwhile, has an ongoing relationship with Grey Goose’s media-buying firm OMD.

Marois said he’s been pleased with the show’s performance so far. The series has nine episodes running for roughly 10 minutes or longer. Across both Group Nine’s and Oath’s properties, the first three episodes have captured close to 10 million video views and average a watch time between five and seven minutes. Fifteen percent of the show’s viewership has been organic, which is above the benchmarks the brand set internally, Marois said.

“Our objective was to lead with entertaining content that would capture the audience’s attention,” Marois said.