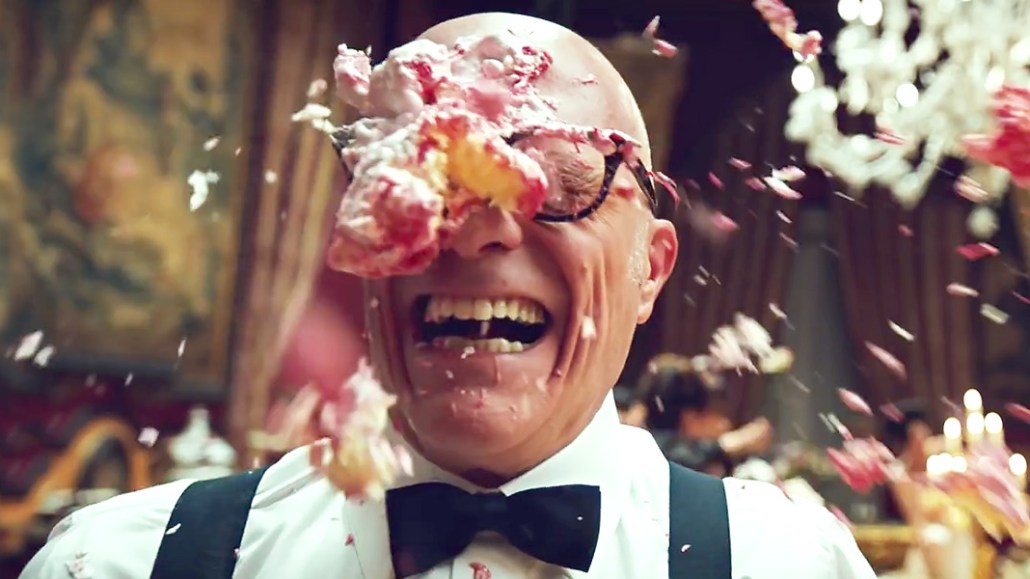 Last week, E*Trade launched a new loathsome campaign (agency: MullenLowe) that makes me want deliver a haymaker right on its stupid asterisk. The ads attempt to make us poors burn with hatred toward the beautiful rich, while also telling us, “Don’t get mad. … Get E*Trade,” while also telling us, not very indirectly, that our lower-class existence sucks.

“Plane Truth” is the worst of the lot:

Our “hero,” getting kicked in the back by a ginger terror, rises and heads to first class. … Why? To politely inquire if any of the more attractive, more moneyed flyers would like to do a complete stranger a solid and instantly pay for his upgrade? Seriously, why would you go stare into first class, like a traveling rube? No matter, the curtains are slammed in his sad-sack face by the model/flight attendant.

“First class is there to remind you that you’re not in first class.” Thanks for that important update, douchebags.

“The harder you work, the nicer the vacation … your boss goes on.” What a pleasant reminder about the depressing state of wages in America. E*Trade’s solution? Gambling — with what little savings we have. Hey, E*Trade CEO Karl Roessner, are you on vacation right now? See all six insulting spots here. (Note: The above “boss” also shows up in the “dumbest guy in high school just bought a yacht” spot. Are they friends? Tsk, tsk, MullenLowe.)

Is there any reason I’m watching a rich prick in a Land Rover “race” another rich prick in a glider? Why was this commercial even made? To corner the glider pilot demo? What’s its GODDAMN POINT? I really, really want to know. Agency: in-house.

Update: Chilean men who drink beer are “macho.” But even the toughest of hombres can look embarrassingly wimpy? gay? by lifting his pinky finger when macho-ly slamming a brewski. Thankfully, Barbarian brand beer has invented the antipinky pint, “a glass with a ring cast in iron and testosterone … Of the 100 percent of machos who drank Barbarian, 100 percent remained macho.”

If this isn’t a scam ad stunt, then it deserves to be not just be punched, but be beaten unconscious. From the agency (Serviceplan, Paris) press note:

“The idea … was to display a specially designed interactive digital billboard near a busy crossing. Equipped with a movement detector, speaker, and camera, the smart billboard made the sound of squealing tires whenever a pedestrian attempted to cross the road while the “red man” was displayed. The frightened faces of the disobedient pedestrians were projected directly onto the billboard … alongside the caption: ‘Don’t look death in the face. Check the lights and cross safely.'”

Yes, this heinous stunt made pedestrians think they were about to be killed! Did any of them have a heart attack? Probably not because this is a fake stunt, and the “pedestrians” are “actors.” Here, the ad, the client and the agency all deserve to be decked.