How 5 brands have approached their Messenger chatbots

Facebook Messenger has been luring brands and developers to its platform to create bots for just about everything from acting as a concierge to doling out advice. But there is a lot of variation in something as straightforward as a question-and-answer format. Brands have taken different approaches when it comes to chatbots.

Here are a few.

Starbucks’ character artist
Several companies have been creating chatbots that mimic human behavior. Starbucks created a bot for its Pumpkin Spiced Latte, named The Real PSL, to build hype around the autumnal drink in the U.K.

The emphasis here was on personality. The bot — its avatar wearing sunglasses — would give snarky answers and one-liners around the arrival of the season. (Its favorite book, for example, is “Gourd of the Rings.”) Not everyone liked it. Partially because the bot would deflect questions it could not answer with cat GIFs and anecdotes that would go round and round in circles: “I love that question, almost as much as I love thinking about what my DJ name should be. What’s your vote?”

Other brands including Universal and Disney have used the same tactic to promote movies through their own characters (Doc Brown and Zootopia’s Judy Hopps, respectively). “People’s relationship with a fictional character is exploratory,” said Sam Shaw, head of insight at Canvas8. “In the entertainment business, it’s a great way to explore new channels to express the brand. Not all bot interactions have to be functional.”

British Airways’ emoji quiz
British Airways tapped into the internet’s love of quizzes with its “Emojibot” chatbot, launched in December. The bot asks customers a series of questions about their ideal holiday. Next, they are given a selection of emojis to choose from. After they’ve selected their emojis, a destination is popped out with a link to the brand’s online sale. Customers outside the U.K. can message the brand using its Botler to receive tips on places to visit in London. 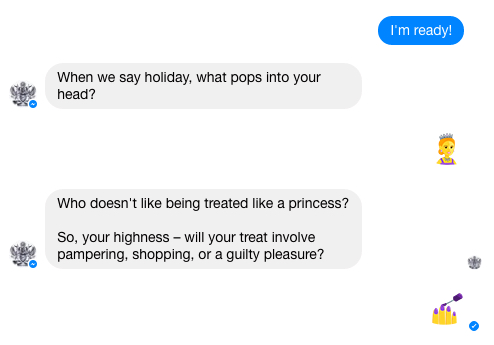 “There is an element of surprise and delight here,” said Brendan Murphy, senior partner at creative consultancy Lippincott. For him, bots like this are effective because they give their audience something they don’t expect. It helps that the quiz feels personal too.

Unilever’s social purpose
Unilever toothpaste brand Signal Pepsodent created a chatbot with agency R/GA that aimed to assist children with the nightly ritual of brushing their teeth before bed. At a time set up by their parent, children can watch one of 21 short videos that end with a challenge that requires them to brush their teeth for two minutes. 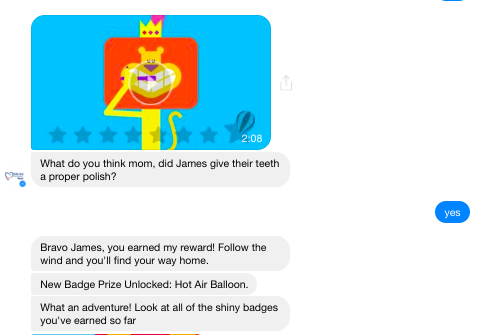 After following the instructions, the child receives a badge. Alerts can be set up at a certain time each night.

But conversing with an audience around social and behavioral issues requires a careful balance between being useful and overbearing. “The nature of branding is changing,” said Murphy. While the brand relationship is becoming less visual and more conversational, it gives more importance to language. “We need to design bots with that human voice and decide when they are allowed to get snarky or deploy empathy.”

Pernod Ricard’s content hub
Pernod Ricard has been investing heavily in content, with a 300-strong cocktail library due to launch next year as part of its rather complex-sounding CES reveal. This emphasis on content is clear in its chatbot, named The Cocktail Coach, which showcases the brand’s various drinks in the form of a recipe guide. Facebook users making drinks at home can navigate through different recipe ideas based on their chosen liquor or cocktail. They can also click through to buy ingredients (including said spirits) on Ocado’s e-commerce site. 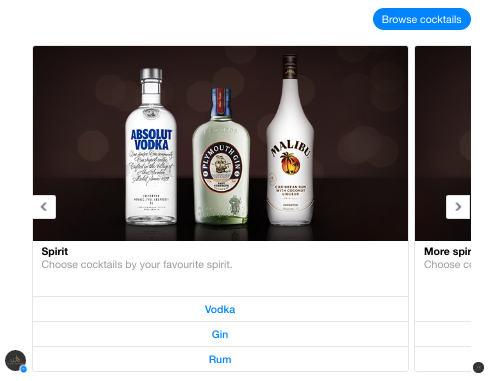 EBay’s e-commerce drive
Other brands have been using Facebook Messenger for e-commerce. EBay has kept its chatbot purely practical. The eBay Shopbot helps users find and buy items from the site within the Messenger platform. Users can toggle between suggested items by price or find those that are the most popular. The bot also learns from their choices to tailor future suggestions and prompts. 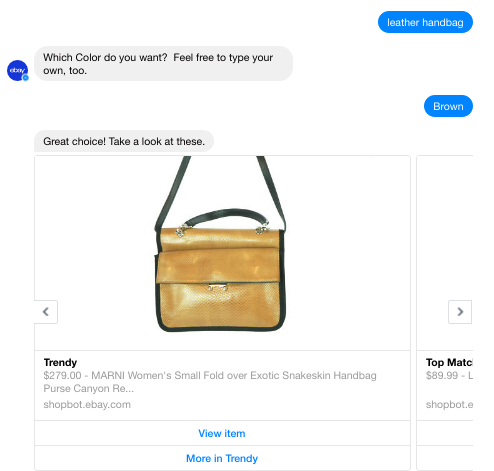 For example, a user asking for a handbag will be asked for their choice of color, price and style. The bot will also remember their common searches. This is a step-up from the basic Choose Your Own Adventure-style bots that have flooded the market.