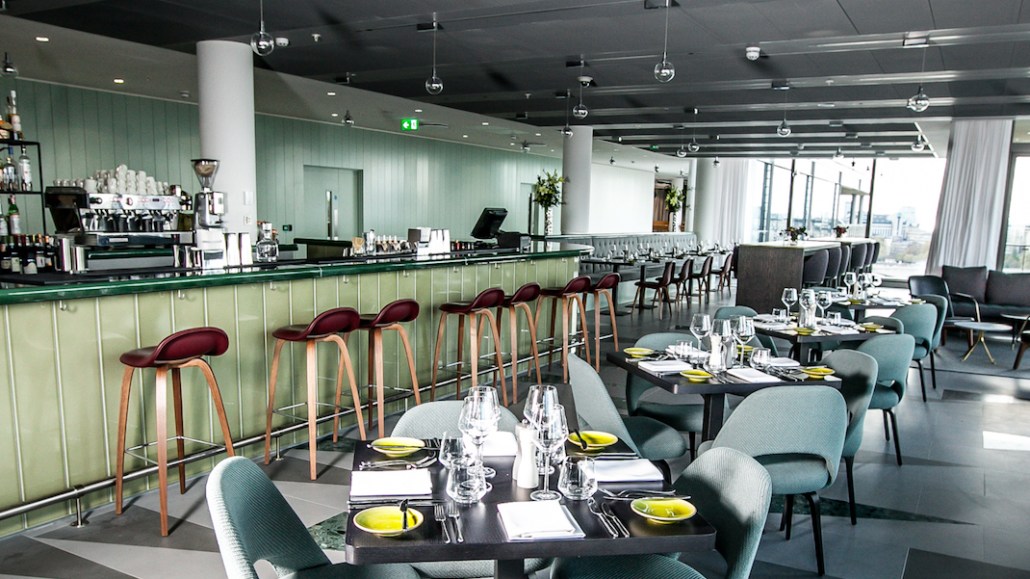 For better or worse, ad land has a drinking habit.

Though the days of the extended liquid lunch are over, for many, alcohol remains a means to grease the wheels with clients and colleagues alike.

But staff at U.K. agencies don’t even have to leave the building to find something stiffer than an orange juice. The agency bar is a mainstay. Here we take a look inside some of the best.

Digitas LBi’s traditional boozer
Housed on the site of the former Truman’s Brewery in East London, DigitasLBi built its basement bar at the end of 2014. In a nod to its roots, Truman’s actually agreed to provide the agency with pumps and kegs of its beer from its new address in Hackney Wick.

Like any traditional East End pub, there is taxidermy on the walls and —  of course — a pub quiz. There are free drinks every Friday, when donations are taken for the agency’s charity of the month.

The space is named The Lion & The Unicorn, after the mascots of its holding company Publicis Groupe (a lion) and itself (a unicorn). Hung on a reclaimed pub sign, the bar’s logo was created by designers Lottie Jones and Henry Chung. Like a real boozer, it also appears on specially created beer mats and bar runners.

Go for: The beer (duh)
Stay for: The quiz

Ogilvy’s riverside haunt
A contender for the most-Instagrammable agency bar, Ogilvy & Mather’s vertiginous Cucumber bar and bistro has floor-to-ceiling windows that show off a cracking view of London.

The space actually gets its name from the bar’s milky shade of green. It is offset with plush velvet chairs, marble and brass accents.

Drinks-wise, there’s a seasonal menu created by events company Green & Fortunes, with cocktails like Kahlua Eggnog and Gingerbread martinis over the festive period. But the most popular cocktail on the menu is Dutch Courage, a combination of gin, feta cheese, ginger and a tonic reduction. For the less adventurous, there’s also craft beer and wine.

Go for: The views
Stay for: That unlikely feta cheese drink (if you can stomach it)

Social Chain’s no-nonsense bar
Social Chain’s bar is hard to miss at its office in Manchester: It’s slap bang in the middle of the ground floor. Simply known as “the bar,” it stocks a range of spirits, mixers and beers for staff and guests.

Its official opening hours are 5 p.m. onwards, though on a Friday this moves up to lunchtime. According to the team, the most popular drinks are Brewdog’s Punk IPA and, simply, gin.

It’s not unusual for meetings to take place here, and the entire team meets here for weekly creative reviews, which evaluate the week that was. It also gets busy on Friday nights, when the team meets before a big night out.

Like every pub worth its salt, there’s also a giant dart board. Because why not mix alcohol with sharp flying objects?

Go for: The craic
Stay for: The sleep pods next door

Rufus Leonard’s trolley
Rufus Leonard has made its bar mobile with the trolley-based service, MacBishop’s.

With the departure of Michelle Mulvey, who organized the previous “bar” at the agency, there was a gap in the market.

Started by copy lead Luke Bishop and senior project manager Nic Macbeth, MacBishop’s is described as a bar “of miniscule proportions.” It is made up of a tiny trolley bought on ebay for £46 ($56) and a laminated sign tacked on the side.

Despite its diminutive stature, the trolley has been wheeled across the agency and catered to various events, including an all-staff meeting, alongside birthday and leaving parties. The most popular drink is a gin and tonic, with limes cut by — what else? — a butter knife.

Come for: The “Rufarian” spirit
Stay for: A ride on the empty trolley

Grey’s eventful venue
The Grey Bar is embedded into the agency’s working week whether staff like it or not, according to PR manager Emma Nabridnyj. It it used primarily as an event space and this week, it featured a talk from eccentric “American History X” director Tony Kaye.

This week it also hosted a party for a project around Alzheimer’s disease that is being crowdfunded by some of Grey’s creatives. The whole agency dressed up as “Mad Men” era advertisers to help raise money for the cause.

The busiest time for the bar is Thursday evenings, where drinks are free. The team often carry on the party at The Hat and Tun pub nearby.

Come for: The fancy dress
Stay for: The afterparty

Essence’s tea-themed affair
Liquids run deep at Essence London, which has given its meeting rooms names like Darjeeling, Earl Grey and Oolong thanks to its tea-themed office.

Its bar, The Cosy, was designed by the agency’s creative director Andy Veasey. By day, it serves as good place to grab a hot drink, but at 4 p.m. on Fridays, it becomes the fun-bar, stocked with wine and beer.

Essence has over 30 different nationalities under its roof. At International Hour, one employee is given a small budget to stock The Cosy with nibbles and tipples from their homeland. This has included everything from vodka (Poland) to cold brew coffee (Canada).

Go for: The snacks you can’t pronounce
Stay for: The cultural education

Its bar, named 22, is busiest in the evening when it catches the sun setting across the city. While Jellyfish staff gather here for after work drinks, the space is also used to host monthly meetings, larger conferences and day-to-day sessions. According to the team, watching the city’s fireworks on Guy Fawkes Night for free has been a particular highlight so far.

A popular drink is champagne, though the agency has hired mixologists on occasion to jazz things up.

Come for: The bubbly
Stay for: The Instagram likes

MPC’s (lower) Sky Bar
Another sky bar (though considerably closer to the ground than Jellyfish’s) is production studio MPC’s jaunt at its hub in Soho. 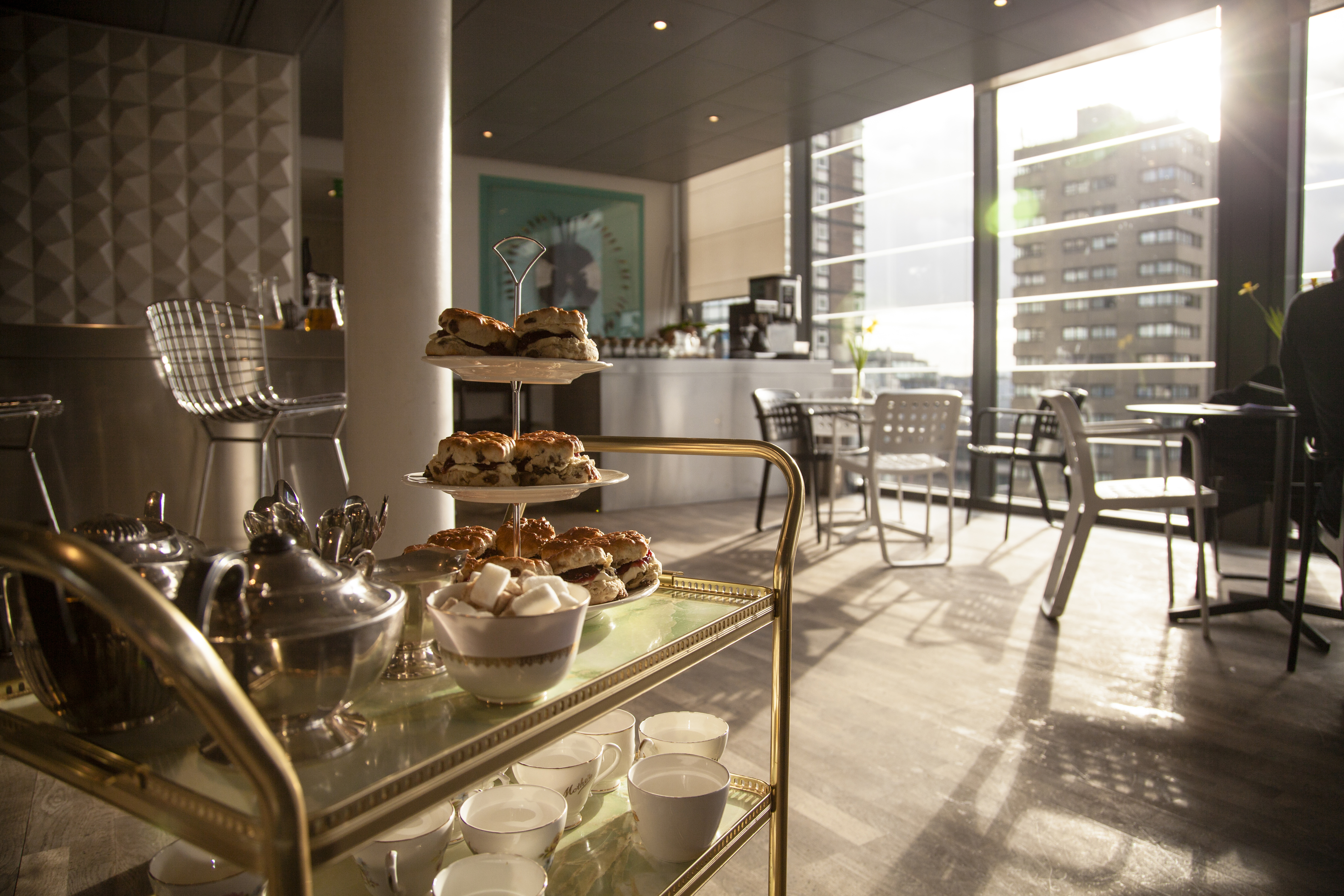 By night, there are parties, including a recent Rio-inspired carnaval to celebrate the agency’s work on Channel 4’s “We’re the Superhumans” ad.

By day, clients can relax and sample items from the drinks trolley, which is stocked with gin and tonic. There are also supplies for afternoon tea should anyone get peckish.

Unlike other bars, MPC’s has an entertainment corner too. Visitors can try on VR gear to view some of the company’s recent projects created in the medium.

Come for: The scones
Stay for: The chance to see execs fall over wearing VR goggles

The Bio Agency’s poker joint
The Bio Bar was born seven years ago when employee Johann Morton discovered a small cupboard of alcohol at the agency. Back then he used the meager supply to conjure up cocktails for all of the staff.

In the years since, the bar (and its budget) has grown. Now, at 4.30 p.m. Bio staff can saunter down to the Bio Bar to grab a jug or two of cocktails, or help themselves to beer and wine. The lychee and espresso martinis are a current favorite among the team.

The venue also plays host to the agency’s monthly poker night. According to the team, demand can keep the bar open late. The current record is 8 a.m. Saturday morning.

Come for: The martinis
Stay for: The poker winnings