FCB global CEO Carter Murray: ‘We have to focus on talent and culture.’ 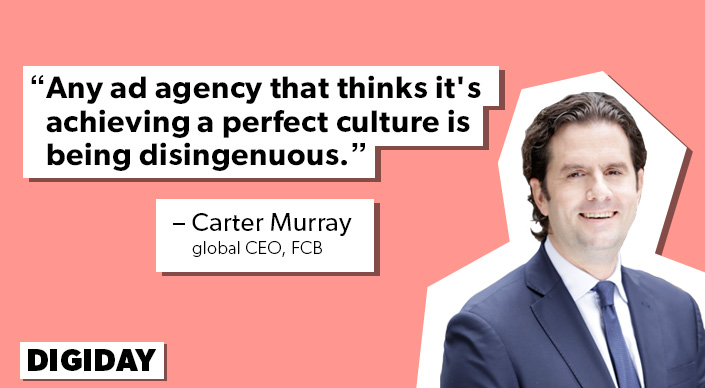 When Carter Murray signed on to lead FCB (then known as DraftFCB) in September 2013, he had a huge challenge ahead of him — turn around one of the world’s most well-known agency brands even as it was struggling with decreasing revenues and high-profile client departures. Things have improved slowly but steadily at the IPG shop, which has won a Nestle assignment and won a pitch for the Dockers account as well. And amidst all the tumult, Murray has maintained his non-stop energy, one of the character traits many in the industry remark on when discussing the 39-year-old. Digiday talked to the Brit-born leader about how FCB can compete against Google, why people are onions and why your alcohol of choice matters.

What did you ask Santa for this year?
I actually did a Santa list. I want to do great work and have fun.

Give me an actual thing.
I asked for, what I would like is for more great talent our way in 2015 and to make sure that our best talent sticks around. With everyone looking at Facebook or Google as the place to work, we have to focus on talent and culture.

That seems like a recurring problem. Why aren’t agencies keeping up?
It’s the nature of our industry. The role of procurement has made it harder to invest in some of these things. CEOs have to make commitments. On a higher level, what’s going on is the holding company consolidations are creating more and more pressure on the financial results. Some of the business priorities in the economic environment are making it harder to focus on strong creative cultures. How do I drive the culture all the way down to the receptionist? Andrew Robertson [president and CEO of BBDO] said culture trumps strategy. He’s spot on. In the environment of large holding company pitches and big procurement and big pressures on the bottom line, it’s hard to keep focusing on culture and talent but ultimately it’s what is important.

How do you explain all these high-level issues to young people coming into the industry who don’t care, they just want good jobs and make good money?
Learn from the startups. Be open, be down to earth and be ambitious. Try to create an environment where it’s fun and it’s a meritocracy so whatever gender, ethnicity background you are, we provide a creative culture. That’s our ambition. Any ad agency that thinks it’s achieving culture every day is being disingenuous.

What’s the biggest mistake you’ve made in your career?
I think sometimes acting too quickly. You can act too quickly and you can also act too slowly and you can be blamed for doing both. When I arrived at Y&R North America I sat in an interview and a lady walked into my office with a hell of an attitude. She said to me “Talk to me in 12 months if you’re still around.” I thought, okay, for three months I won’t engage her and then I’ll fire her.

When I got into the job I realized, she was just a brassy New Yorker who had been through one too many management changes, and was just calling it how it was. Later I realized she was one of the single-best account people out there. I wasted three months not using her. I shouldn’t have judged her. There are many layers to people.

How do you then make the decision to hire someone? You can’t “know” someone’s layers in a few interviews.
I didn’t know the answer to it for a long time. When I moved into the Y&R job and even when I was at Publicis, I always thought it was impossible because I always look for the best in people so you have to be really bad candidate to be rejected. I remember we did this bias workshop, it was [chief talent officer Cynthia Augustine’s] idea. We break into five tables and each one is given the same resume, just with a different picture. And each table gives feedback on if you would hire someone. You get to see a lot of biases. What came out of that exercise was the only way you hire people is if you get at least three people in on the process. You don’t make the decision alone. My perspective may not always be spot on.

What’s your favorite interview question?
This was a memorable one. When I was a student in England, I was trying to make some money on the side, I went for an interview. It started with: “Would you like gin or scotch?” I said gin. This was an English realtors in London. The guy was a gray-haired man in a suit. He was a gin guy. He wanted to work with someone who liked what he did. I got the job. This was another era in another time. I would never ask that question.

You spent a lot of time when you go into the job working on the FCB rebrand.
Yeah, it was amazing. Normally when you do a rebrand the reaction is 50 percent positive and 50 percent negative. But I actually got an outpouring of how amazing it was. It was way more exciting and way more positively received and got way more noise than I expected.

People say more agencies should work on their own brands, with as much care as they do with clients.
Listen, clients always have to come first. But, I believe very strongly that we should apply the principles of marketing and branding ourselves as much as we apply to our clients. Look at our brands, who are we, what do we stand for. We should treat our brand with the same pride and thoughtfulness as we do theirs.