Facebook’s latest bid: Helping small brands step out of the news feed and into physical retail.

Facebook has partnered with Macy’s to bring its first Small Business Pop Up to nine Macy’s stores across the country starting on Nov. 5 and running through Feb. 2. In total, 100 brands that have so far built the majority of their audiences on Facebook and Instagram will get in-store retail space during the holiday shopping season, including Ancestry.com, Charleston Gourmet Burger Company, Mented Cosmetics and Bespoke Post. To participate, Facebook fielded applicants, ultimately choosing a pool of merchants whose products would fit in well at The Market at Macy’s, the retailer’s program for bringing new and upcoming brands into stores. Competitive brands, product assortment and ability to handle high-volume inventory demands all played into that decision.

Facebook covered the participant fee that brands participating in The Market at Macy’s typically have to pay. It will be running ads on Facebook and Instagram to promote the pop-up, and it has built free digital ads through Facebook’s Creative Shop for every brand in the pop-up to run on their own feeds, promoting products on sale and available in stores. And for three weeks in November, Facebook is running 600 ad units in Grand Central Station to drive foot traffic to the pop-up at the Macy’s in Herald Square.

“We’ve been investing in digital tools level the playing field for small businesses, to get moving and growing on Facebook and Instagram,” said Michelle Klein, Facebook’s director of marketing for North America. “To bridge the gap [offline], it can be hard to know how to get started. We had the idea to see if we could deliver on a promise of driving shoppers to physical stores, as much as we help sellers access these shoppers online.”

With an offline push, Facebook is joining the wave of digital brands into physical stores, following online growth driven largely by Facebook and Instagram ad platforms. The very same company that made it possible for brands to launch solely online is now grabbing at the opportunity to help facilitate brand growth in stores, which, in comparison to Facebook’s ad-saturated feed, feels like a breath of fresh air.

“For brands born online, offline is a way to reach more customers and build the brand in new ways,” said Klein.

In terms of having a physical retail presence up until now, offline retail has been rolled into a Facebook program called Community Boost, during which Facebook reps visit cities and host training and education programs for one to three days, on topics like starting and evolving businesses on Facebook. Helping to determine “physical readiness” is part of the program. Klein said that this was an early test for how Facebook might figure into future offline plans for brands, but that the team would be watching metrics like sell-out rate and engagement with in-store Facebook activations to determine whether or not it’s a space worth investing in down the line.

As digital brands realize they need to diversify their media mix, Facebook latching onto physical retail signals that digital platform dependence will only continue to decrease.

“Facebook gave us virality as a brand, but it’s not just about Facebook ads now. We experiment with social ads on other platforms, we work with influencers, we experiment with direct mail,” said Bradford Manning, co-founder of the T-shirt brand Two Blind Brothers, which will appear in the New York Market at Macy’s. “They’re all experiments in trying to find customers. Physical retail fits into that now, too, because there are so many avenues.” — Hilary Milnes

Shipping wars
Amazon doesn’t often get beaten to the retail punch. But the company on Monday announced a move to offer free shipping to U.S. customers with no minimum purchase amount, starting on Nov. 5 and running throughout the holiday season, ending on the last day to order in time for Christmas deliveries.

Target in October said it would offer no-minimum, two-day free shipping on hundreds of thousands of products from Nov. 1 to Dec. 22. Amazon, which typically offers free shipping on qualifying orders of more than $25, was caught flat-footed by the move, analysts said.

Unless you already shell out the $119 a year Amazon Prime runs, the shipping will be standard, taking at least five business days. Target had previously offered two-day free shipping on orders of more than $35.

Charles Dimov, vice president of marketing for the research firm OrderDynamics, said Amazon was careful to preserve benefits for its Prime members in offering the new service. For instance, Prime members in more than 60 major U.S. cities can through the holidays receive one-hour delivery from Whole Foods via Prime Now — perfect for last-minute Thanksgiving substitutions.

The addition showcases Amazon’s increasing sophistication when it comes to merging its brick-and-mortar partnerships with its core delivery business, according to Dimov, who called it “key to understanding Amazon’s omni-channel approach.”

But it was ultimately a reactionary move to Target, he said.

“Amazon would of course not call it a reactionary move,” said Dimov. “However, with Target, it really is. I don’t think there are many times when Amazon’s kind of caught off-guard, but I think this might be one of those rare occasions.” — Michael Bodley

Prime headaches
Amazon is the most difficult platform to advertise on, according to media-buying executives surveyed at October’s Digiday Media Buying Summit. It replaces Snapchat, which was considered to be the most difficult platform in a similar survey done earlier this year. According to those surveyed, Amazon lacks ease-of-use tools that Facebook and Google have built over the years, and its sprawling suite of services make it hard to navigate. “Google is an adult and Amazon is still coming of age. Advertising isn’t their most important revenue stream, but they’re certainly doubling down on it,” said one exec. 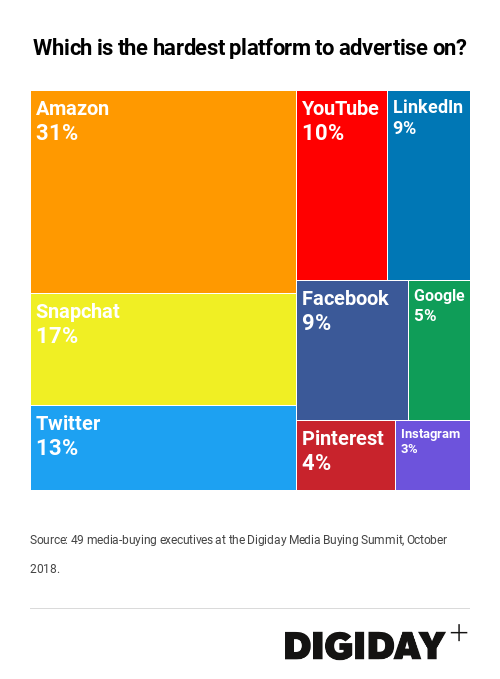 For DTC brands that want to test the waters of physical retail, which products their items are presented alongside can make or break customer purchasing decisions. While being placed beside competing products is a no-brainer, ensuring complementarity is key.

“We don’t want to be next to a fizzy soda that’s not like our product — these are two different sets of consumers, and you may look great in a package but you can’t always assume consumers will pull your product,” said Marsha Green, head of marketing at Tio Gazpacho. Tio Gazpacho’s products will be placed alongside a set of curated products at WeWork’s network of retail stores.

Shared retail platforms monetize through a mixture of flat fees and commissions, and revenue-sharing models vary. For Bulletin and soon-to-open San Francisco-based shared retail space Re:store, brands pay a monthly fee plus a cut of the sales (20 percent for Re:store and 30 percent for Bulletin), while others like b8ta charge a flat monthly fee. — Suman Bhattacharyya

What we’ve covered
CVS is rolling out an Amazon Prime-style members program with its 1,900 store locations playing a starring role.

Digitally native brands are using the weight of their Instagram followers and tight grip on first-party customer data to cut better deals with wholesale retailers.

Walmart’s online marketplace for third-party sellers hasn’t turned out to be an Amazon alternative that some sellers hoped, according to merchants using the platform.

What to watch for
It’s Election Day in the U.S., and some brands are making statements or urging customers and workers alike to exercise their right to vote.

Amazon is getting close to announcing plans for its upcoming HQ2, but details of the deal are already leaking from the company’s existing headquarters.