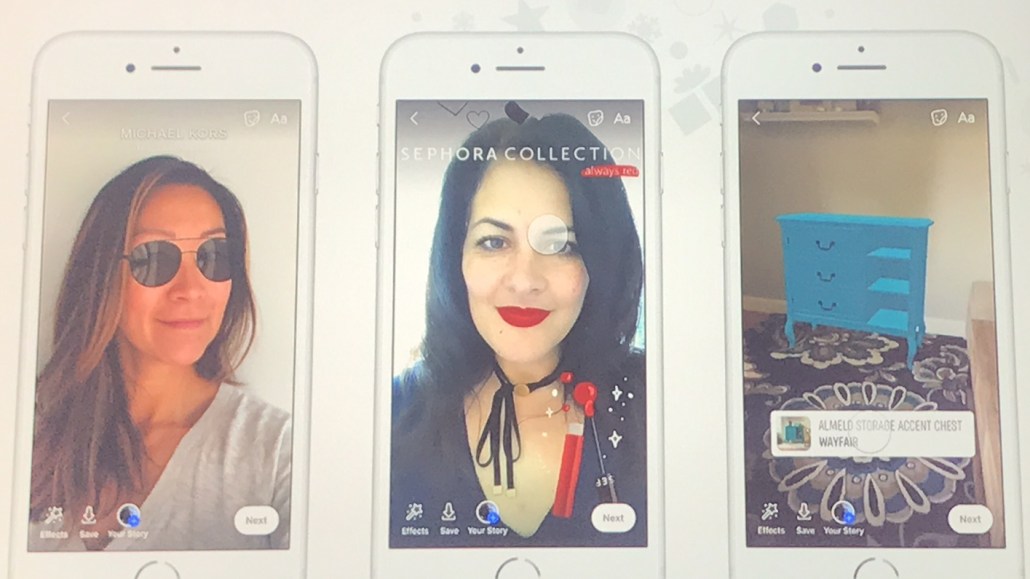 On Tuesday, Facebook announced it is bringing augmented reality ads to the Facebook news feed and expanding shopping in Instagram Stories to all companies. Facebook also announced a new Video Creation Kit for mobile video and the expansion of its Collection ad format in Instagram to all advertisers.

Ty Ahmad-Taylor, vp of product marketing at Facebook, who announced the updates at Facebook’s ‘Here for the Holidays’ event to about 200 marketing folks, said the AR ads and shopping features wouldn’t cost advertisers any extra and that they would be sold via the Facebook auction like any other ad format.

“As retailers prepare for their biggest shopping season of the year, we’re excited to introduce new products that will help them both delight and inspire shoppers, and ultimately drive sales,” he said.

For AR ads in the newsfeed, Facebook will begin testing AR ads with companies across segments this summer with the goal of adding more companies throughout the year. Wayfair, Sephora, Pottery Barn, NYX Professional Makeup, Bobbi Brown and King have signed on to participate. Michael Kors was chosen as the first company to test AR ads in the newsfeed with an ad allowing people to try on sunglasses and buy them straight from the ad.

Shopping with Instagram Stories is currently still in beta to select advertisers like Old Navy and Gap but will become open to all companies in time for the holidays.

Marketers at the event expressed enthusiasm at the updates.

Jess Jacobs, director of marketing at Wayfair, who spoke about the company’s holiday Facebook strategy on a panel at the event, said Wayfair sees AR as a core way for the company to reach customers and Facebook’s new AR ads will help drive people to the company’s own AR properties, and plans on using the new ads to promote Wayfair’s AR app in the coming weeks.

Kelsey Vanderlip, senior manager of brand and strategy at Away who also participated on the panel, said the director-to-consumer luggage company is especially interested in the expanded shopping capabilities in Instagram Stories. Away isn’t part of the original beta group and so it’s “tough not to use the shopping functions,” Vanderlip said.

The move to bring AR ads to the newsfeed didn’t surprise many marketers. At its F8 conference, Facebook announced it was bringing AR to Facebook Messenger, and the newsfeed is a natural next step. Ahmad-Taylor said the platform was inspired by the success it was seeing with the use of AR in Facebook Messenger. He pointed to how Nike used AR in Messenger to exclusively sell its new Kyrie 4s shoe and sold out in under an hour.

Facebook also pointed to the growing popularity around AR with a stat from Boston Consulting Group that estimates that nearly 80 million people in the US engage with AR on a monthly basis and expects the number to grow to 120 million by 2021.

AR ads have gained traction on rival platform Snapchat. In May, Snapchat said more than 100 advertisers were already buying its AR ads programmatically and that a Foot Locker and Jordan Brand campaign using four AR ads saw an average play time of 45 seconds and over four million impressions.

At the event, Facebook also shared its findings around mobile video, saying that one in three shoppers say video is the best medium for discovering new products. With that, Facebook introduced a Video Creation Kit, a tool to help advertisers create mobile video ads using their existing images. The feature is in testing and will roll out to all advertisers in August across Facebook, Instagram, Messenger and Facebook’s Audience Network.

At the same time, Facebook is rolling out its Collection ad format within Instagram to all advertisers. The format lets people to browse additional products that are for sale while staying inside of the Instagram feed.