‘Elephant in the room’: Agencies are rolling out Amazon service units 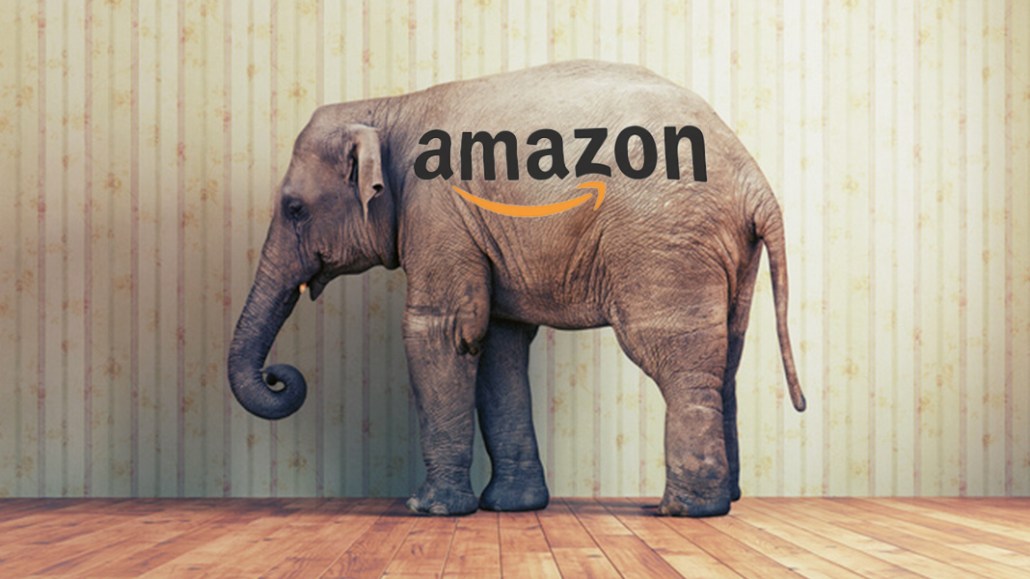 No less an authority than WPP Group chief Martin Sorrell has christened Amazon as the “elephant in the room.” And that means there’s a perfect opportunity for agencies to roll out Amazon-focused services to clients.

The most recent one was a collaboration between WPP’s Possible and Mindshare, which two weeks ago said they would work together to create an Amazon services partnership that will offer everything from channel strategy and shelf management to media planning and buying on Amazon. That’s just a couple months after WPP acquired Amazon specialist consultancy Marketplace Ignition.

Part of it has been driven by clients, who were “asking us to advise them and support them on Amazon,” according to Frank Kochenash, Possible global svp of commerce. “Obviously, Amazon’s a retailer. But even without the buy button, it is the largest product information and reviews site, the most important product and shopping-specific search engine; as a social channel, it is at least as important as Facebook to most brands; it is a logistics provider; it is a technology stack; it is a product and brand research and launch platform; it is a technology platform that is defining in-home commerce via voice interactions.”

Agencies can work with two major groups of media offerings on Amazon. Amazon Marketing Services, known as AMS, is a self-serve do-it-yourself platform that’s closer to paid search media. Buyers can set a spending limit and pay for clicks. Essentially, it’s a digital campaign management system that ensures brand ads have the right exposure. Amazon Media Group, known as AMG, is more of a traditional ad buy that can include video across Kindle, sponsorship, displays and even out-of-home ads on Amazon trucks.

The Tombras Group, an ad agency based in Knoxville, Tennessee, has a new Amazon offering, and the inflection point was on AMS, according to evp Dooley Tombras. “Sales started going up, and we started seeing an increasing return on ad spend on Amazon. This is a big deal,” he said. “The lightbulb went off.”

Amazon’s latest earnings report, posted in February, found that its “other” revenue — which would most likely indicate digital advertising — grew 60 percent in 2016 to $1.3 billion. (This is still small compared to Google’s $80 billion ad revenue.)

Kevin Packler, vp at Tombras who joined the company from Marketplace Ignition, said its focus is entirely media. “We’re looking at it as a media platform. And it’s not really a sleeping giant at all. It’s a giant.”

For agencies, Amazon is still a mystery. Multiple agency executives who are working on setting up agency offerings said the company is notoriously secretive, not only on the retail side but also on the media side. Mindshare and Possible’s new unit is hacking it, using a marketing sciences practice and tools that collect data from Vendor Central, AMS, the Amazon advertising platform and third-party tools to create weekly, monthly and quarterly reports. The company is also looking at customer reviews as a data source. And according to Kochenash, his clients are regarding Amazon as more “controlled” and safer than other platforms like Google and Facebook.

“It’s a whole new way of working,” said Brian Cohen, evp and group director at shopper marketing agency Catapult, which has an Amazon practice. “Amazon gives you some data, but it’s not in the way marketers are used to analyzing data.” Tombras puts it more succinctly: “If Google AdWords is like a Lamborghini, this is like a slow, automatic car.” For example, on AMS, basic functionalities like being able to control spend throughout a single day don’t exist yet. The platform is simplistic and compared to Google, “prehistoric in comparison,” Packler said.

A lot of it feels like stumbling around in the dark.

For example, at Catapult, the agency is focused on, among other things, helping brand clients make sure they do not get suppressed in search rankings. With 55 percent of online shopping starting with searches on Amazon, Catapult is trying to figure out Amazon’s own algorithm, which Cohen said is “complicated” and includes sales, marketing, media and SEO. Like in the early days of search, “we think they take into account how much you’re spending on media with the company to decide search rankings,” he said. “Along with other things like the imagery brands use, how they do inventory management. But it’s just what we think. We don’t really know. Amazon won’t tell us.”

Amazon is also starting to pitch agencies directly, approaching them to convince them not just to buy on Amazon but with a “broader” sales pitch that includes nuggets like, “For every 12 people that come to Amazon, 11 will buy a product.” It’s also empowering agencies: Catapult became a “Trusted Creative Partner” a couple of years ago, which certifies the agency to build creative within Amazon’s ad guidelines.

The company is also beginning to approach more agencies to push AMG, according to multiple executives.

The thing that sticks is, as always, data. Just like retailers chafe over how tightly Amazon holds onto customer data especially in wholesale and direct deals, agencies want more as well. “I expect better tools and support for advertisers, but I expect that to be done in an environment and context that always puts the needs of the end customer first,” said Kochenash.

“I equate it back to the early days of Facebook,” said Cathy Butler, CEO of agency Barbarian, who is starting to think about building an Amazon practice. “For now, it’s a media opportunity; we do have the opportunity to get into it for the strategy offering.”