#DudesGreetingDudes: One man’s campaign against catcalling 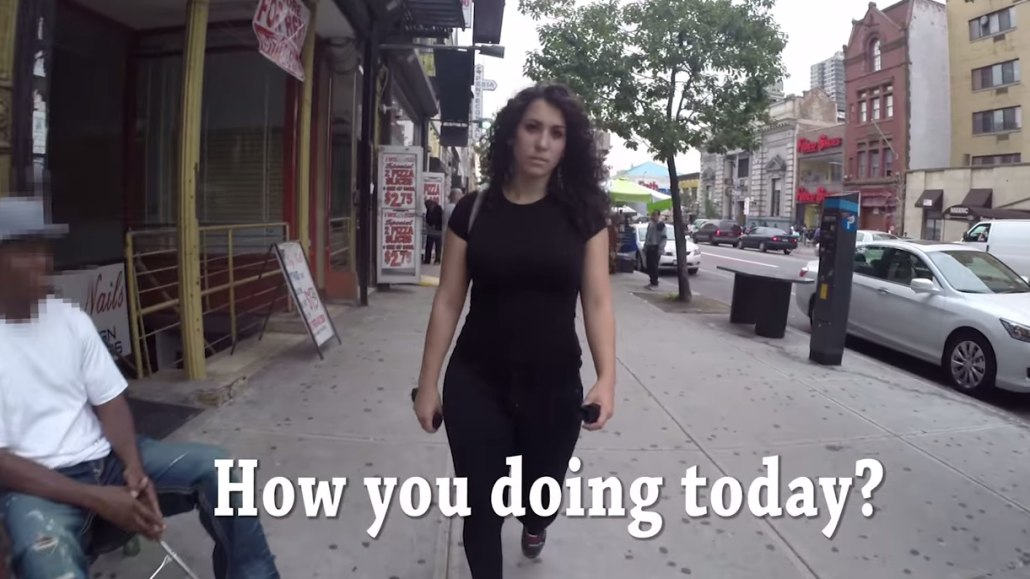 “It’s not street harassment, it’s just a guy saying ‘hi’ to a woman!”

That kind of lame defense of catcalling has been floating around the Internet ever since this video, featuring a woman walking silently down New York City streets and being catcalled over 100 times, went viral.

But it’s all about context. If the shoe was on the other foot — if a guy was “just saying hi” to another guy — would his “compliments” still work, or would they collapse under their own absurdity?  Sunday night, comedian and radio host Elon James White ran that exact experiment, with a series of tweets that cleverly surfaced the hypocrisy of men who think saying “hi” is just their way of being friendly.

“I’m just saying. I’m a nice guy. I just want to say HI. And you’re going to accept this greeting whether you fucking like it or not.”

Dudes. If you feel society has lost it’s decency, let’s bring it back. Let’s start the #DudesGreetingDudes movement! Say hi to each other! — Elon James White (@elonjames) November 2, 2014

The hashtag caught on. According to social media analytics firm Crimson Hexagon, there have been more than 9,000 tweets of dudes ironically greeting other dudes. About 41 percent of the posts are positive. Related hashtags have also cropped up, like #notjusthello, which is among the top-trending terms on Twitter.

As with #IceBucketChallenge before it, #DudesGreetingDudes is an organic, grassroots way for people to participate in a social media movement without actually having to do much — provided they can be a little bit pithy. However, the hashtag seems to be losing steam. Peaking the day it launched, Nov. 2, it was used less on Monday and Tuesday.

At the same time, it is raising awareness about a pretty big issue. The original video about catcalling, created by anti-street harassment organization Hollaback!, has already led to people asking whether harassment laws need to be expanded and strengthened to include catcalling.

“I’ve already achieved what I wanted when I started the hashtag. The hypocrisy was what I wanted to highlight,” said White. For years, he said, pop culture has suggested that “invading a woman’s space” is the only way to approach a woman. The idea was to group together a “sizeable” amount of men being very clear that “women’s safety overrides our desire for a supposed connection.”

“If that became part of the culture, then perhaps the next generation of men will see this option and lean toward that,” he said.

“Dude, do you have a girlfriend? Where is she? Does she know you’re walking around dressed like that?” #DudesGreetingDudes

#DudesGreetingDudes How you gonna wear an over size scarf like that bro and not expect to get some compliments? — Shit A Bit (@ShitABit) November 4, 2014

Melanie McShane, senior strategist at Wolff Olins, said that platforms like Twitter are “awesome tools” that “enable people to create a movement in a minute, or change a mind in 140 characters.”

I just wanted to say I love the bed head look (reaches out to stroke dishevled, gel filled hair) #DudesGreetingDudes

“Battles fought on social media can and do affect our legislation,” she said. “The most successful, like Human Rights Campaign and It Gets Better helped people everywhere to be creative and authentic contributors. Showing where you stand on something via social media is normal.”

But what’s next for this particular campaign? “Honestly that’s all up in the air,” White told Digiday. “I’ve put together these types of hashtags and responses before, and it really depends on myriad factors how it will all play out.”

The campaign is far from over, though. According to White, he has bought the domain dudesgreetingdudes.com, and he has hinted in tweets that there may be some videos coming down the pike. He’s not divulging what plans he has for it but said to “get ready for it.”

I’m happy that we all agree that #DudesGreetingDudes is the solution. Women may feel jealous when we leave them out of this but WHATEVES. — Elon James White (@elonjames) November 2, 2014