Interviewing Assange: What it’s like to talk to the man behind Wikileaks 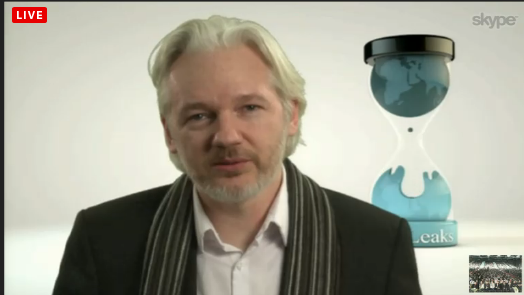 One of the highlights of South by Southwest was an interview via Skype of Julian Assange, the founder of Wikileaks, who is holed up in the Ecuadorian embassy in London.

The interview, held on Saturday, wasn’t conducted by a journalist but by Benjamin Palmer, the founder of digital agency The Barbarian Group. Palmer battled technical difficulties — he was forced to text Assange because the audio on Assange’s end cut out — during the interview, which captured Assange’s beliefs that the fight against government spying is tantamount to past battles against authoritarianism.

Palmer sat down with Digiday to discuss how the interview came about and what issues he didn’t get to discuss.

How did you arrange to interview Assange?
We just reached out. We were talking about what would be interesting to do, and it was after all the Snowden stuff. It seemed like the interesting thing. We found a person who represents him for interviews and got to him through there.

You went to London to meet him in the Ecuadorian embassy prior to SXSW?
I thought it would be awkward if we’d never met. It was figuring out how to talk to each other.

What was that like?
You walk past a bunch of policeman. The [Ecuadorian] embassy is in a nice neighborhood. They took my passport and phone. Then, we talked about SXSW. He hadn’t been here before, but he knew a little bit about it.

Was there anything that didn’t come up?
One of the things that was really interesting that we didn’t touch on the major points [of the revelations] weren’t a surprise to him or people who have been paying attention.

Did you nearly panic during the tech problems?
It wasn’t great. We’d tested everything a lot. We had a dedicated line. We had a live connection going until we went on stage

Do you think it was the NSA?
I don’t know. That’s what everyone was joking about.

What were some questions you didn’t get to ask?
There’s a bunch. I wanted to talk more about the future of Wikileaks. He started Wikileaks to be an entity that can do this thing over and over again. He created a brand. Is setting this in motion leading to journalism changing a success to Wikileaks? Or is it to have this organization that everything flows through?

You didn’t bring up the rape charges against him.
No. I’d get the same answer he gave everyone else. I wanted to stick to digital discussions. I feel like most of his conversations have been with political journalists and not in front of a digital audience.

Why should brands and agencies pay attention to these kinds of things?
The Internet is embedded in culture. If you’re working in an agency or brand our business depends on people’s attitude to the Internet. If people stop trusting it, it’ll change our business.

Did you come way thinking Assange is a hero or threat?
Probably both. The thing that’s most amazing about him is he’s this super courageous person. He went for it, and he’s woken a lot of people up.