Deals through private marketplaces or “PMPs” were once a niche part of marketers’ media budgets, but are becoming increasingly critical to marketers’ media strategies. With rises in programmatic spending in both the U.S. and Europe, we asked 98 brand and agency marketers at the Digiday Programmatic Marketing Summit in New Orleans and in Estoril, Portugal what percentage of the digital ad inventory they purchase now comes from a PMP. 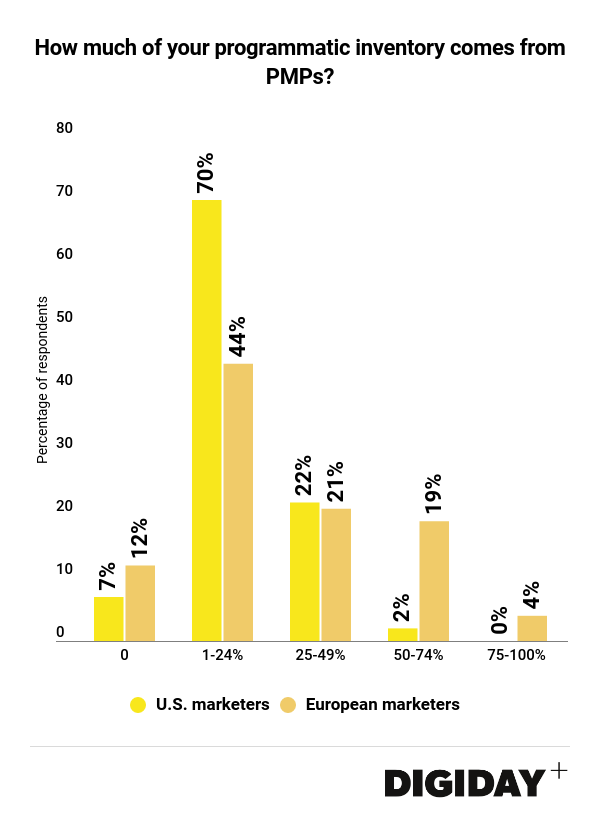 PMP spending in the U.S. is growing. Ninety-seven percent of U.S. publishers in a previous Digiday survey said they plan on increasing the amount of deals transacted through a PMP in the coming year. Meanwhile eMarketer estimates that PMPs will account for $8.99 billion of the $39.1 billion spent on digital display spending in 2018, a 37.3 percent year-over-year increase.

However, Europe has traditionally seen higher PMP usage than in the U.S., especially in markets such as the Netherlands and Germany where PMPs are responsible for almost all programmatic transactions. France is also experiencing an increase in PMP spending.