Some teens weren’t even alive when Cadbury aired its last TV ad for brand Crunchie back in 2000. But recently, the chocolate bar has been all over its spiritual home, Snapchat.

The marketing push is part of Cadbury’s long-term “Obey Your Mouth” campaign, which launched on May 11. Sales of chocolate snacks have been declining, so Cadbury’s aim is to sell its ‘singles’ bars – Wispa, Crunchie, Boost, Double Decker and Twirl – to a new, younger target market.

Of Snapchat’s 100 million active users, about 55 million are in the coveted 16 to 24 age range. According to research firm Canvas8, 40 percent of teens in the U.K. are on the platform.

Because of this, Cadbury has spent half of Crunchie’s digital budget on the Gen Z hub — its top platform after TV and online video. (While Cadbury wouldn’t confirm the total, the budget for its five singles brands is £6 million ($8.7 million), so it’s likely to be a six-figure spend.)

So how did it go? Besides making her team all feel “a little bit older,” Cadbury brand manager Barbora Hrdlickova shared with Digiday some insights from the platform so far.

National campaigns work
Snapchat is known for its location-driven interface, which lets users unlock content based on where they are.

While brands such as KFC and Pandora are experimenting with its geofilters, the platform also works for those looking to broadcast on a national scale.

Lenses and national geofilters let everyone see branded content, as opposed to content only available at a certain place at the right time. For example, Coca Cola’s Christmas campaign, which deployed a U.K.-wide geofilter, reached 70 million views. 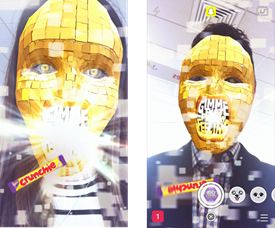 As Cadbury wanted to reach as many eyeballs as possible, Hrdlickova opted to create three different lenses for the Crunchie campaign. In keeping with the bar’s “Get That Friday Feeling” tagline, these were released to users over the last three Fridays in May.

The brand had been aiming for a total of 10 million views for the lenses. Its first, which morphed users’ faces into a golden disco ball, attracted 9 million views. Cadbury does not yet have data for the other two, but initial signs indicate they also performed well.

Products perform
As the campaign was looking to introduce Gen Z to Crunchie, it made sense to incorporate the product itself (not just the logo or the tagline) into the lens — even at the risk of alienating users. During the creative process with Cadbury’s agencies Elvis and Fallon, the brand decided to take the plunge.

“If it makes sense with the story, it makes sense to use it,” Hrdlickova said. For this reason, the chocolate bar featured in all three of its lenses. The final lens, triggered when a user opens their mouth, gave them a pair of giant golden lips that bit into the bar, as a “disco” breaks out around them.

Keep it simple
On a visual medium like Snapchat – which can also be used without sound – creative ideas need to translate without any explanation.

“It’s all about fun. Kids on this network use it to make each other laugh. The most frequently sent type of content is funny,” said Sam Shaw from Canvas8.

For this reason, Cadbury opted to make its lenses humorous with the novelty factor of seeing your face turned gold or having giant lips. As there’s a limited time to connect with your audience, Hrdlickova says simplicity is key here.

Another reason to keep things simple is that the whole creative process does take time. Cadbury’s ideation stage took around two months, while the engineering on Snapchat’s side took around three weeks, as all its production is done in-house.

It’s hard graft
While Cadbury opted to go big and broad (and pay the price), other brands using the platform are taking a low-budget approach: By starting a user account, they can build up a following organically through word-of-mouth and sharing their unique snapcode on their other social channels.

But while Hrdlickova noted that brands like ASOS are doing it well, it isn’t for everyone. For Cadbury, launching a user account was determined to be too big an investment in time and staff. Paying for a lens, however, was a good way to cut through and get the reach Cadbury wanted. It allowed the brand to harness video’s reputation for driving engagement, without committing time.

While it won’t be starting a user account any time soon, Cadbury is now planning other campaigns for its remaining singles bars on the platform. They can be expected later this summer.