CrossFit CMO Jimi Letchford: ‘CrossFit is tighter than a religion.’

This is ThinkTank, a new series from Digiday where we quiz CMOs and brand chiefs on where their industry is heading. First up: Jimi Letchford, the CMO of CrossFit.

It’s not easy trying to captain a brand like CrossFit. The extreme workout regimen with affiliates all over the globe has managed to, despite all odds, go beyond a fad and become mainstream: By analyst estimates, the company made well over $100 million in revenue last year. And it’s more than the regimen. Thanks to a deal with ESPN, The CrossFit Games — featuring incredible feats of strength and agility — show fans what they can achieve if they do something as simple as join their local outlet, or just do the workout of the day posted on the website. It’s entertainment and advertising, both. And via a deal with Reebok, it has managed to extend its brand into apparel and shoes.

But here’s the rub: along with growth has come increasingly vocal criticism of the regimen. While most of the dissent is anecdotal (the workout is only about six years old, not long enough for enough studies to be conducted), one study published by the National Strength and Conditioning Association (NSCA) by two authors from Ohio State is a big headache for the brand right now. Nine of the 11 people it surveyed suffered either overuse or injury complaints. But even that claim has its fair share of controversy: The study’s own subjects later said under oath that the study’s claim was invalid.

That’s where Jimi Letchford comes in. The brand manager of CrossFit is making it a priority this year to go on what he’s calling the “offensive,” saying that it’s time for CrossFit, the brand, to clean up its image and put out his version of the truth. The former Marine began his career as a trainer after the workout’s inventor, Greg Glassman, asked him to come on board to develop the company’s training program. He took his training on the road, whipping bodies into shape around the country.

Impressed, Glassman asked him to build up CrossFit Games. “‘Jimbo, we need sponsors,’ he told me,” said Letchford, who helped CrossFit license its trademark to Reebok for apparel and shoes.

Letchford spoke with Digiday about his unique set of challenges. Excerpts:

First things first. Is CrossFit dangerous? Do you have an image problem?
It’s not dangerous. Every time I walk into one of the boxes, I see something amazing happening. I picture it like a bell curve where you count the number of athletes [customers] we have. The people in the middle, they have the ability to affect our brand more than anybody else. Those are the people that believe in the workout and the brand.

What about the Ohio State Study?
We have competitors ginning up things. It’s stuff that looks like studies. It’s peer-reviewed journals, not even real journals, saying CrossFit is dangerous. It’s ridiculous. The onus is on them to prove it. If you were an elementary school principal and I walked around saying that “you’re a pedophile,” it’s my job to prove it. So, I say to them, show me the proof. There haven’t been enough studies. The thing is, we can trace all these things back to a certain company or companies. We are working on our data. We’re going to prove that it’s not true. In our industry, “CrossFit hurts people” is like death. Even though it’s not true.

So what are you going to do about it?
We’re in the middle of a lawsuit. Nobody is going to talk shit on our affiliates and us not stand up for it. Our brand is our licensees and our instructors. 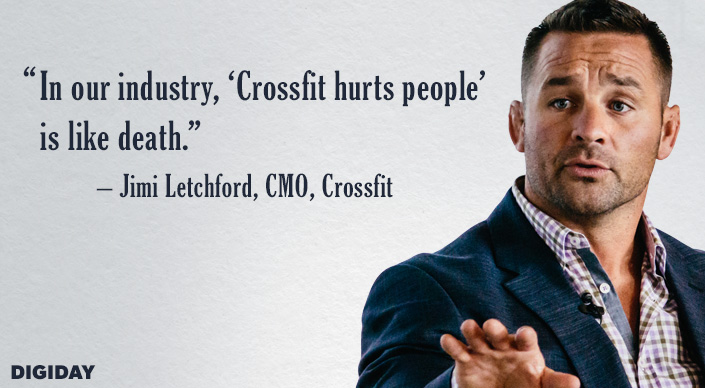 Every day, there’s a new “hot” workout. What makes you more than a fad?
Our big thing is we don’t have anything to sell. That’s the big difference between us and the other programs, DVDs, and supplements, and so on. We want to be the best fitness program in the world, and we are and we always will be. And it’ll always be free on CrossFit.com. Everything we find will be public to the world.

But what about the Reebok deal? Isn’t that essentially selling?
See, Reebok exclusively licenses our apparel. We started off with a t-shirt business that grew like crazy. In one year, we went from $50,000 to $75,000 to making like $1.4 million. People liked the t-shirts. But then, we got to the point where we felt we were starting to feel a little like the other brands. We’ve turned into a t-shirt company with a fitness brand. We didn’t like that. So when Reebok came about talking about the partnership, it was good timing for us because we were getting out.

Do you keep them separate?
That was something we always do. We don’t talk it up in the boxes or anything. A certain shoe isn’t going to tone your butt. Certain shirts won’t increase your oxygen intake. For any true athlete, shoes don’t increase performance. They just don’t hinder it. We’re not gonna be in the business of holding up a shoe like a Coke commercial. That Reebok shoe is the best fitness shoe, but that’s a fact. We only wear their shoes because we genuinely like them.

What’s your marketing plan?
The only marketing that looks like marketing to us is the CrossFit Games. That’s showcasing our program and affiliate work. It’s beautiful, it’s fun, it’s a festival — and it’s a loss for us financially. But we do it because it’s the way we get our story out. It is really us looking at it as a showcase program. Our marketing is not marketing, but we tell our story only through media and content. We put a camera on everything. We have CrossFitters holding a camera and hanging with others and recording workouts and writing on our blog. We tell our affiliates’ stories. And our athletes’ stories. We’ve done nothing else.

What is the biggest challenge? What keeps you up at night?
Just making sure we’re supporting every single affiliate we can. Look, we’re not architects of a skyscraper. We’re shepherds to an orchard.

So what’s your priority?
We’ve been very standoffish about PR and media. We’ve always felt like, we’ve told out story but now we need to open up and let others tell it too. We grow 30 percent a year and that’s it. Every one of our properties continues to do that. We’ve never needed to be offensive about PR. But we’re going to open a lot more. We’ve never had to do this.

Is that in response to the image problem?
Well, kind of. We need to be more offensive and let others get our brand out there more. I’m learning a lot. There was a thing at Harvard recently, where they were studying us as a business. CEOs and companies came in, and they were all about the bottom line and what moves would you make to increase the bottom line. But then the Harvard Divinity School was there, and they were really fascinated by us and our community. The product that comes out of CrossFit is that you can be the most self-centered or egotistical prick and once you work out, you’re a lot more selfless. CrossFit is tighter than a religion.