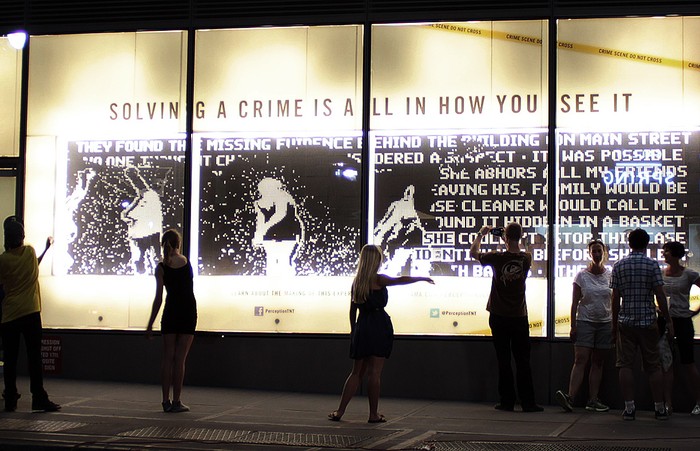 You always hear creatives lamenting about clients setting all kinds of limits on their creative vision and killing the best stuff. Well, agencies, TNT may just be your dream client.

Breakfast hatched what it’s calling a “real-time electromagnetic dot display,” an updated version of old signs in train stations with letters and numbers that flip over as they change. The twist: The display changes based on motions of those in front of it. When walking by, the sign displays mirror images of the people in front of it, reacting immediately to their movements. You wave, your dot-matrix doppelganger waves back. The movements knock away words, revealing clues to anagrams that the star of “Perception” uses to solve crimes. The idea is to physically involve participants in experiencing the plot of the show.

The project is the latest head-turner from Breakfast, formed to meld together tech and creativity — and basically hack together really cool stuff that infuses digital technology into the real world. The five-person shop in Brooklyn previously came up with the idea of outfitting a blimp promoting Conan O’Brien’s TNT show with the ability for people to check into it on Foursquare. It also developed Instaprint, a mobile photo booth that turns the photo app’s pictures back into Polaroid-like prints.

How in the world did you guys come up with the idea for this “real-time electromagnet dot display”?
We’re constantly surveying the different kinds of technology that are out there, and these dots have been on our radar. It’s something that we were always excited to try to find a use for. We were able to figure out how to make these things go a lot faster than they are supposed to. We were able to make them move at 30 frames per second. Normally, they only move at about two or three frames per second.

Can you explain how it works when you go see it?
In its idle state, you see this large screen with copy on it: Tt’s phrases derived from the show — so things about a crime that was committed or a mental condition that a suspect has. As a person moves past the display, their image knocks certain words and letters off the screen, and what is left are certain words that give clues to crimes in the show. These letter and words rearrange to form an anagram — like how the main character in the show sees anagrams. The copy is all inspired by the script of the show.

How long did it take to construct?
The physical rig five or six weeks of design and few more of just assembly time.

How does Breakfast approach creative that isn’t tied to one medium?
The medium should really follow the idea. Rather than try to force an idea into a specific box, we work hard to stay in touch with all the tools that are out there (either as things that are off the shelf or things that we can create from the ground up) and go with whatever fits the best.