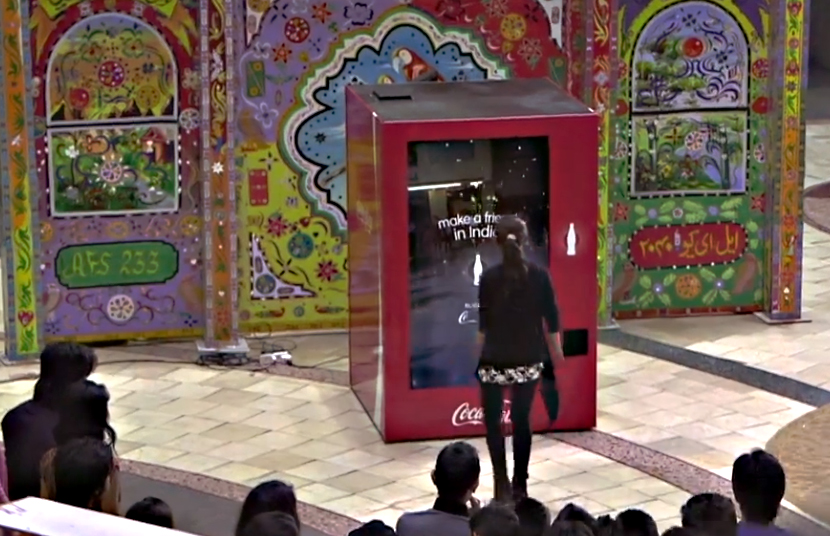 Nobody has reached a consensus on whether or not brands should get involved in sensitive topics like marriage equality or politics. Either way, Coke is the latest brand to take a stand on a touchy subject, in this case peace between India and Pakistan.

Since the partition of India from British imperial rule in 1947 and the separation of Pakistan, the two South Asian countries have maintained a complicated and often violent social, political and religious divide. This doesn’t seem like the kind of issue a major brand like Coca-Cola would get itself tied up in. But that’s exactly what the brand has done with its “Small World Machines.” Coke has played around with interactive machines before, but none involved connecting two warring countries. In this case, the vending machines helped people in India and Pakistan connect through an act of kindness: sending a Coke.

The campaign, created by Leo Burnett, involved placing one machine in India and one in Pakistan. The special high-tech machines were equipped with webcams that allowed participants to see each other and interact with each other with actions like joining hands, drawing hearts and peace signs and sending over a Coke.

According to The Drum, over 100,000 cans of Coke were given away over three days in India and Pakistan. It’s definitely a touching campaign. Brands like Coke show a measure of humanity by adroitly wading into such touchy subjects.