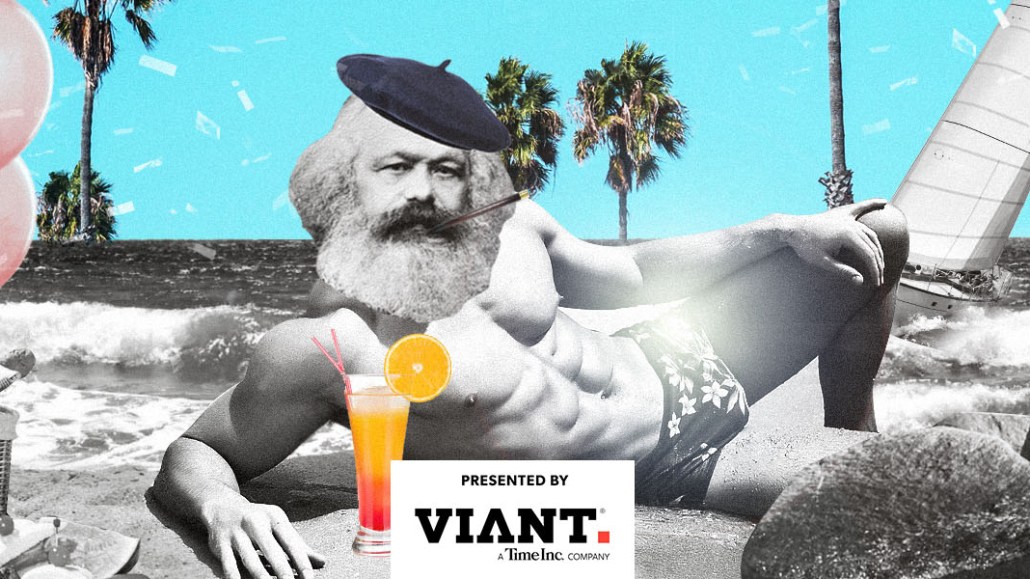 In retrospect, maybe Cannes started to decline when that couple had sex on the red carpet two years ago. At the time, it was a symbol of how Cannes had grown into something of a bacchanalia. But looking back, that was probably peak Cannes.

Cannes started as a way to laud advertising creatives, and it has now turned into a celebration of late capitalism. It’s hard to not feel a level of disconnect when wandering around a gigantic chateau, a pig roasting on a spit, pink inflatable swans floating in the pool and the ever-present rosé freely flowing midafternoon. There are probably now more sales people here than creatives.

That presents Cannes something of an identity crisis. Its strength has been an ability to bridge worlds that are colliding: advertising, media, tech, entertainment. But that’s also become a critical liability. Cannes is perhaps a victim of its success. And ad agency chiefs are now openly questioning its usefulness.

Publicis Groupe said it would cut out Cannes and other awards shows next year to save money. WPP CEO Martin Sorrell, noting the decision, added that “the jury is out” when it comes to the ad group’s commitment to the festival. Last year, WPP sent 1,000 people, and this year, 500. One agency exec told me only people with client business here could go this year — even if someone else is footing the bill. (Media companies and platforms often pay for the trips of ad execs.) “This has become too brash, too spectacular,” Sorrell said.

Cannes losing the support of the largest advertising holding companies would be a serious blow. The festival still puts creativity at the center of how it markets itself, even if the majority of the attendees never set foot in the Palais.

Ghost town
One place feeling the impact of a quiet Cannes: the ad tech party yacht scene. Walking by yacht row on Tuesday night, several yachts were empty, with others having only a handful of people on board.

“It’s a ghost town,” said one ad agency executive, who said he walked by the yachts one evening to see an ad tech CEO sitting on his boat by himself. Another agency exec who visited an ad tech boat said his time was “a mix of asking to be left alone and being pummeled with propaganda.”

One theory: The loss of the Daily Mail yacht has had a cascading impact. Many would flock to the harbor to try to get on board to see Kim Kardashian but would then end up settling for an ad tech yacht. But without the big draw, the other yachts are left without the spillover.

All the big tech platforms including Facebook, YouTube, Twitter, Spotify, Pinterest and Oracle have their own private beach spaces (where badges and wristbands are required to get in). Some publishers, including The Economist and Time Inc., are also getting in on the fun by renting space inside the Cannes Lions Beach Club.

Then, you have the cabanas, which are being used by CNN, NBC and Hulu, among other media companies. A few marketers, including Unilever and Nokia, have also set up space here. Finally, you have the ad tech flotilla.

“The truth about Cannes is, you have trusted media brands like The Economist and Time Inc. at one end, platforms in the middle and most of ad tech floating on their yachts at the other end,” said Paul Rossi, president of The Economist Group. “You can draw a direct line from high-CPM and safe media to lower-CPM questionable media — or as Marc Pritchard said, ‘craft versus crap.’”

Ranking the music acts of Cannes

1. Run the Jewels @ Vice: Hip-hop impresarios Killer Mike and El-P are playing the Vice party on Thursday night. They’re the best live act in rap and completely on-brand for Vice.

2. Solange @ Spotify: She’s the younger Knowles sister but is blowing up in her own way right now. With Spotify Beach right across from the Carlton, the line started early.

3. Future @ Translation: Steve Stoute hosted a “creatives-only” party at Gotha, which is roughly 2 kilometers from the Carlton. This was the cool party to go to on Wednesday night. $350 per bottle.

5. The Weeknd @ MediaLink: The Weeknd chose to play on a weekday. Hilarious.

6. Ed Sheeran @ News Corp: Ed Sheeran is living the life that every unpopular kid growing up has. His music is fine.

A couple highlights:
“There are scruffy areas of people. People are scruffy. Everyone accepts. Nobody is expecting perfection, but expecting authenticity is reasonable. This conversation has always happened. You couldn’t see the message in real time and affect it.”

“We want to generate a flywheel of engagement. My favorite example is a New York Times story on prison reform. This reporter wrote the story, then got involved in the discussion on Reddit, then wrote another story for the Times about the conversation he had. We’re not just sending these media sites traffic. We’re helping them come up with new stories.”

Rumormongering
Snapchat put itself at the center of Cannes with its giant Ferris wheel, but the original idea was to have a branded submarine. Someone thankfully thought better.

Overheard:
“You’re not that cool; you’re not making plutonium in there. Just come out and be about execution.” — an agency exec walking out of the Snap greenhouse

“Well, then you should connect with Solange’s people.” — a Spotify rep denying an entry bracelet to a Cannes delegate yesterday afternoon

“For 10 years, YouTube has been trying to monetize every single video. Well, [ads next to extremist videos] is going to happen if you try to do that. I’m a YouTube guy, but I have to tell clients that if you buy YouTube, there’s a chance you come next to bad stuff. And that’s not something they’re worried about with CBS.”