Brands and publishers are sliding into your Facebook Messages.

What began as a way to privately message your college crush is now being infiltrated by brands using it as a customer service platform or publishers looking for a new distribution channel.

“It gets exciting when companies look at it as part of multichannel experience and a mindset of how people can talk to me as a consumer,” said Ilicco Elia, head of mobile at Digitas LBi.

Here’s how brands and publishers have used Messenger, which has over 700 million users, as a service so far.

Messenger for news
Bild, the German tabloid site, began testing sending news updates through Messenger with help from Berlin-based startup Spectrm. So far, this is limited to information about football players getting transferred, and updates on reality TV show “I’m a Celebrity… Get Me Out of Here.”

Julian Reichelt, editor-in-chief of Bild, said the tests are “performing well,” but the Axel Springer-owned site is keeping tight-lipped on exactly how many readers have signed up to get the personal updates to their phones.

“This is a good place to start, but it needs to get way more sophisticated way more quickly,” said Elia. “Where it gets interesting is in interacting with the journalists, when it becomes more of a service rather than a replacement for hierarchical links.”

Messenger for customer service
As Digiday reported in November, Hyatt was one of the first brands to jump on “Businesses on Messenger” as a customer service channel, with the added “human” factor that comes with seeing the “typing“ and “last read” icons.

At the time, the brand said it was a way to have meaningful conversations with guests that were, best of all, private. When dealing with public, brands find irate tweets a much bigger headache.

Messenger for bots
A couple of weeks ago, Facebook opened up new tools for developers to be able to build bots for the platform’s private-messaging app, so brands can now use a 2016 version of chat bots. Disney, for example, this week, rolled out a “Miss Piggy” Messenger bot that you could chat with, in character.

This is solely for entertainment purposes, said Eyal Pfeifel, chief technology officer at Imperson, which built the bot. Disney writers helped craft a script so it felt like people were having an authentic conversation with the character, where mostly it talks about her show “Up Late with Miss Piggy.” Brands can use this to impersonate mascots or celebrities — in December, to celebrate Back to the Future Day, Universal let people “chat” with film character Doc Brown about how he’s finding the “future.” Brands like Pepsi were mentioned, in a futuristic bit of product placement.

Messenger for commerce
Facebook hired former Paypal President David Marcus to Messenger in 2014 and has been working on creating frictionless peer-to-peer payments since.

The travel industry has been using it for order fulfillment. You can order an Uber, book a hotel room, receive KLM itineraries and track shipments on Everlane. And for the last few months, Facebook has been testing “M,” a virtual assistant that it hopes will be the first place people go when they’re looking to shop for anything. 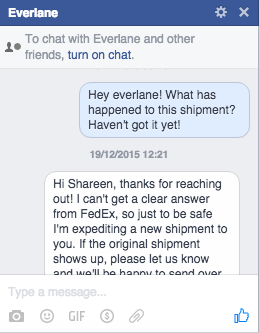 While Facebook says it doesn’t plan to drive revenue from the service a la eBay, the longer-term monetization plan is in Facebook mining even more valuable knowledge about you and how you interact with brands. “If you’re creating a conduit through which all transactions, services and utilities are taking place,” said Elia, “there’s a great opportunity to make money out of that.”