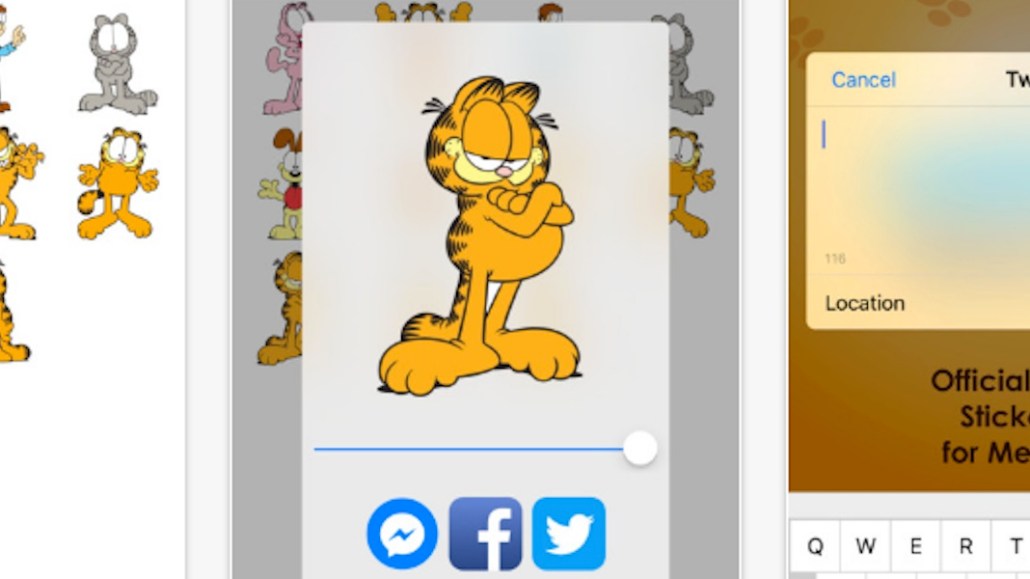 Prepare yourself: Brands may have reached peak emoji, but they’re just about getting started on stickers.

FOMO-infected marketers see audiences ballooning on messaging apps like WhatsApp, WeChat, Line and others. The initial focus on infiltrating these communication channels fell to emoji keyboards, which naturally became ubiquitous. Now, brands including Disney, Starbucks, Sephora and Garfield — as well as their budgets — are moving onto branded stickers.

But emoji keyboards were never anything more than another dubious marketing tactic, making for a good press release and adding to brands’ “hip” credentials, but not much more. At least 250 brands created their own emoji keyboards in 2015 and trumpeted their releases —  but never actually disclosed how many downloads the emoji keyboards got, how many people actively used them or whether they drove any ROI.

Branded stickers are not only more customizable but also far more accessible. Users had to download branded emoji keyboards outside of other apps, which in itself was a big barrier. Branded stickers, on the other hand, are often found within messaging apps themselves. Apple’s iMessage, for example, has an app store within the app with thousands of sticker packs, no need to go to the actual Apple app store.

“Branded stickers are the new branded emoji keyboards,” said Robert Ferrari, CEO at Bare Tree Media, a company that has created stickers for brands including the New England Patriots and Garfield. “The experience is more frictionless, and they are not just a marketing but also a revenue opportunity for brands.”

Evan Wray, co-founder at Swyft Media, a messaging technology company that makes branded stickers and emojis for brands across different messaging apps, agreed. He said that brands were going beyond emoji keyboards, which were “just the first step in the education process of brands” to get acquainted with the world of messaging apps.

“In general, there’s a lot more brand activity in messaging today,” he said. “But the conversation has definitely shifted from ‘what is messaging?’ to ‘let’s do emoji keyboards,’ to ‘let’s now deploy an overarching strategy.’”

What’s more, stickers are also lucrative, presenting both brands and messaging apps an opportunity to generate new revenue streams through sticker sales. Line, for instance, generates over $270 million a year just through in-app sticker sales. On the iMessage app store, brands typically put up a mix of both free and paid sticker packs, which are priced anywhere between $0.99 and $1.99. The New England Patriots, for instance, have general packs as well as special paid packs like the “Champs” pack, which the brand introduced after its team’s Super Bowl win this year.

Brands are flocking to stickers because they are also far more personalized than branded emojis, allowing them to showcase their brands far better. For instance, if KFC were creating a branded emoji keyboard featuring the Colonel, he would most likely be an animated caricature. Now, it can use the face of the actor that plays him and make it into a sticker.

Stickers also make for a far more frictionless experience as compared to emoji keyboards. Emoji keyboards did not prioritize the user experience, according to Wray, because they were often cumbersome to find and then download. On the other hand, stickers are often found within messaging apps directly, and users can obtain or purchase them without any additional steps or downloads. Engagement with branded sticker packs and app sticker add-ons are encouraging too, with users spending an average of 3.5 minutes per session with them, according to Bare Tree Media.

“Stickers are far more streamlined than having the user go and install an app and get keyboards,” said Jana Gauthier, director of digital media for the New England Patriots, which has dabbled in both emoji keyboards as well as stickers for its own app as well as on iMessage. “It’s not always the best idea to force consumers to go to your owned and operated platforms; it helps more to be where they are.”

As far as platforms go, stickers have been widely used in Asian markets on platforms like WeChat and Line for years. But in the U.S., Apple’s iMessage is a clear winner, with 50 percent of branded stickers being shared through iMessage, according to Bare Tree Media (20 percent are being shared through Facebook Messenger and 10 percent through Snapchat.) Apple launched a dedicated app store for its messaging app iMessage, with virtual stickers and other animations, back in September. Since then, brands from Disney and the New England Patriots to Starbucks and Garfield have launched branded stickers on Apple iMessage. According to both the Patriots and Garfield, their stickers are most popular on the iPhone over any other device and iMessage dominates the adoption and usage.

“Seventy percent of our users are on iMessage on the iPhone,” said Madelyn Ferris, vp of digital marketing at Paws, Inc., Garfield’s parent company. “These users have shared 50 million stickers so far.”

One concern for brands marketing in messaging apps — be it through emojis or stickers — has been measurement. But that has become a priority for many messaging tech companies they partner with, from Emogi to Swyft. Emogi, for example, began partnering with analytics company Moat in January, to bring brand-focused metrics and measurement to mobile messaging apps like Kik and others. Swyft Media too has several third-party measurement partnerships in place.

“Stickers help drive both brand awareness and revenue,” said Bare Tree’s Ferrari. “And the conversion is significantly higher than keyboards. These partnerships help us show that.”