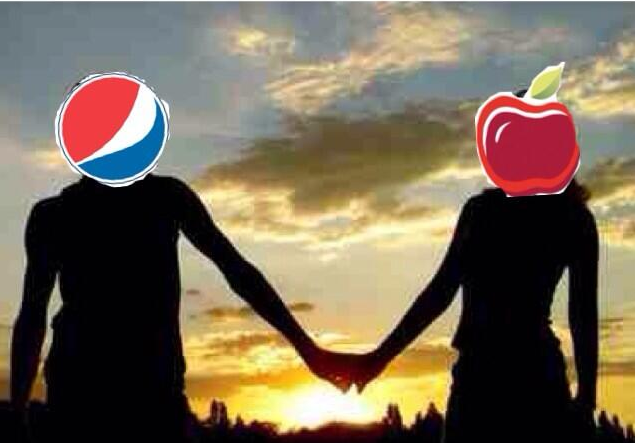 Applebee’s and Pepsi got into a friendly back-and-forth on Twitter last week that started with a random tweet about lunch and resulted in Appleebee’s tweeting back at Pepsi with a mashup of the two brands’ logos along with the hashtag #Pepplebees. That tweet got 68 retweets and 97 favorites, and the brand-on-brand action inspired some fan art and a fake @Pepplebees account.

But what does this kind of brand-on-brand interaction really amount to? It certainly feels like everyone remembers the Twitter “fight” between Old Spice and Taco Bell. But do they really? Or is it just other people in advertising and marketing?

The problem inherent with this type of brand-on-brand social media interaction is that success is hard to gauge. The echo-chamber nature of the ad industry means that plenty of creatives will tweet and write about cool or funny interplay between brands. But it’s unclear how much these stunts actually help brands or impress their audiences.

That’s not to say that brands interacting with each other on Twitter doesn’t create engagement and buzz — and, after all, isn’t that what every brand wants on Twitter? Old Spice’s tweet about Taco Bell’s hot sauce has gotten 655 retweets and 285 favorites since it was posted in July 2012. Taco Bell’s response got 899 retweets and 573 favorites. Two weeks ago, Tesco Mobile — which is known for its cheeky Twitter account — got into a funny conversation with a customer, prompting other brands like Yorkshire Tea and Cadbury to jump in. The whole thing eventually ended up on BuzzFeed, where the story got over 1.9 million views, 32,000 shares on Facebook and 16,000 on Twitter.

“These Twitter stunts offer welcome relief from the more typical banal product posts most brands put forth,” explained Drew Nesier, CEO of social agency Renegade. “Most people don’t care about what any brand says on Twitter, but everyone likes a good fight especially if no one really gets hurt. And these bits of entertainment also increase the likelihood that the battling brands will pick up followers on Twitter, setting the stage for future engagement opportunities.”

However, as with any social media marketing trend — ahem, real-time marketing — when one brand nails it, everyone else jumps on board and tries to recreate other brands’ successful and often spontaneous mojo. Oreo tweet, we’re looking at you.

“I think there used to be a novelty to these early on in social – when else in history was a back and forth between seemingly unrelated brands really possible on such a casual/fun level?” asked Andrew Cunningham, community manager at Huge. “More recently, it’s becoming clear that a lot of these are staged and/or forced interactions, and that takes away almost all of the novelty and fun.”

While Applebee’s and Pepsi are partners — Applebee’s has Pepsi products on its menu — Jill McFarland, senior manager of digital and social media marketing at Applebee’s, assured Digiday that the Twitter interaction with Pepsi last week was totally spontaneous. As she explained, once her team noticed that Pepsi had tweeted something in the stream of responses, they quickly jumped on it and took it from there.

“I think brands interacting definitely can have a positive impact for a brand’s general audience, but it has to be genuine, or our community can see right through it,” said McFarland.

As McFarland explained, brand-on-brand interactions are especially useful when the other brand has a large Twitter audience. While Applebee’s has about 230,000 followers, Pepsi has 2.4 million. This back and forth between the brands allowed Applebee’s to get some exposure to Pepsi’s much larger follower base.

So as usual, it’s really just about business for brands. Brands interacting with each other on social really isn’t so much about the consumers, as Adam Kmiec, director of global digital marketing and social media at Campbell’s, sees it.

“Brand-to-brand interactions reflect a greater level of comfort in social and a more organizational enterprise maturity in the space,” said Kmiec. “Retweets  interactions, while offering little value to the average consumer, send a signal to potential partners that these are brands you’d want to work with.”