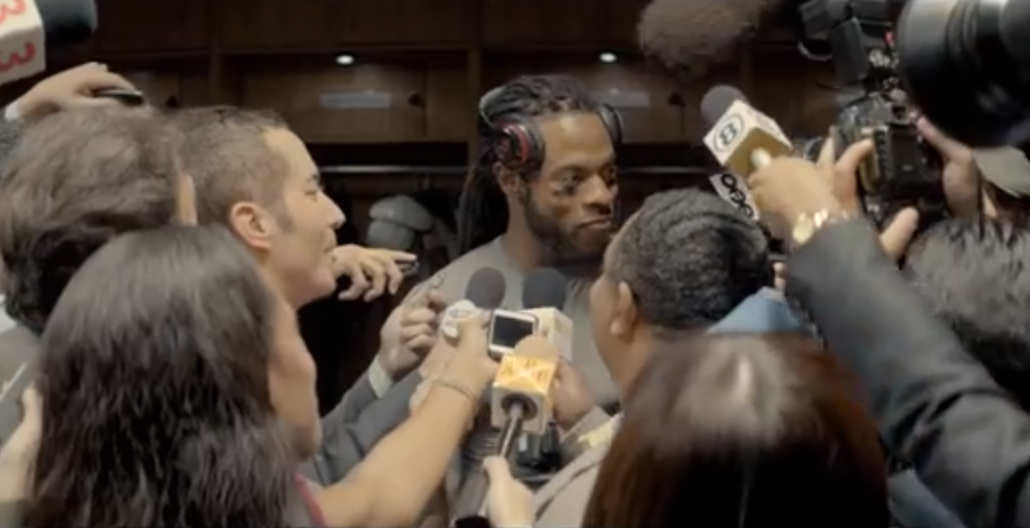 Successful real-time marketing campaigns are usually the work of social media managers who carefully craft brand tweets in anticipation of — or nimble response to — social media buzz. By keeping an eye on trending topics and using hashtags accordingly, they hope to achieve any number of #epic #social #media #wins.

Some campaigns — like the new Beats by Dre commercial — go viral due to sheer luck, however.

Headphones and streaming music brand Beats by Dre is currently reaping the benefits of a fortunate series of events. The headphone company debuted its new commercial during Sunday’s NFC championship game between division rivals the San Francisco 49ers and the Seattle Seahawks. The commercial highlights what polarizing Seahawks cornerback Richard Sherman is perhaps best known for off the field: his fraught yet consistently entertaining relationship with the media.

The Seahawks ended up beating the 49ers — and clinching a Super Bowl berth — after Sherman broke up a pass in the end zone and caused an interception. Sherman then displayed his boisterous personality in the following post-game, on-the-field, trash-talking interview.

In another instance of life imitating commercial art, the choking motion Sherman made during the game is being interpreted by some as a reference to yet another Beats commercial featuring 49ers quarterback Colin Kaepernick.

The post-game interview generated numerous headlines from sportswriters both defending and denigrating Sherman. But the media commotion caused by Sherman’s post-game interview has also transferred to his Beats by Dre commercial; the similarity between how Sherman is portrayed in the spot and his real-life antics has generated some buzz for Beats. The commercial has been covered as news by Sports Illustrated, Seattle Weekly, the Seattle Post-Intelligencer and on two separate USA Today blogs.

Beats is known for featuring cocky, controversial athletes in its creative, including the heavily maligned basketballers Lebron James and Kevin Garnett and the aforementioned Kaepernick. But that’s Beats’s brand. Just as Sherman’s is tough and whip smart. Its series of Hear What you Want commercials is about being brash and tuning out precisely the kind of noise that has been generated today.