Barbarian is replacing its receptionist with an Amazon Echo Show 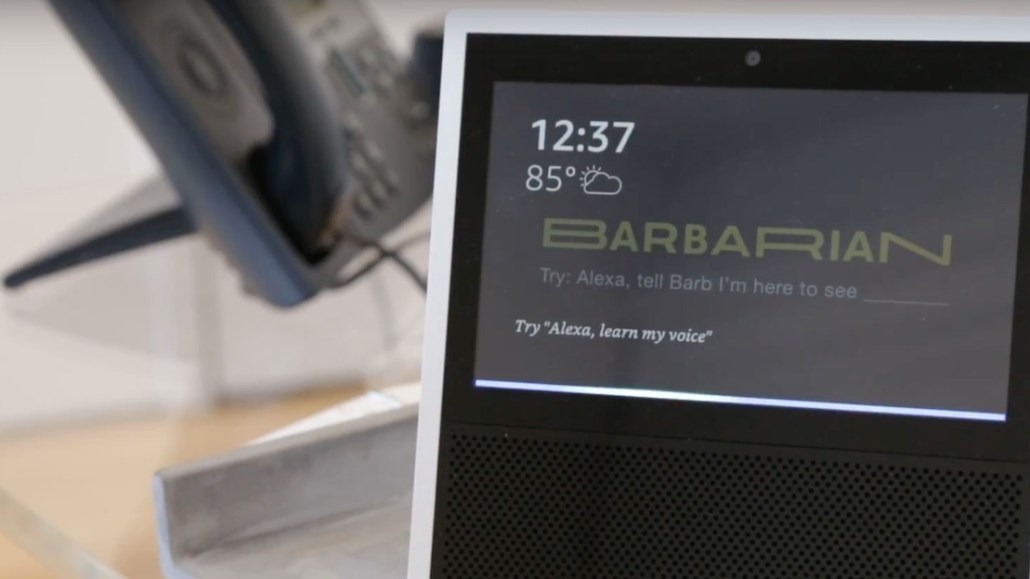 There’s no longer a human waiting to greet visitors in the lobby of Barbarian’s Chelsea office.

Instead, the agency’s new virtual assistant Barb is there, welcoming guests from the screen of an Amazon Echo Show.

With Barb, anyone venturing into Barbarian’s lobby can reach anyone in the office in real-time, thanks to an integration with the agency’s Slack channels. Barb can ask guests what their visit is for, alert employees when a visitor has arrived and carry on a conversation with an employee (and a guest) through Slack. Barbarian has created three videos with scenarios that show Barb’s capabilities. One where a pizza delivery man tells Barb he’s dropping off a pizza, one where a man is picking up his date and another where a frustrated visiter is checking into a meeting.

Chuck Fletcher, chief technology officer at Barbarian, was careful to say that the move is not an effort to replace workers with technology, but to boost their efficiency. Barbarian is not firing its human receptionist; he’s being moved inside the office where he can focus on many of the other roles he plays at the agency, including setting up client meetings and planning company-wide events. It was all his various responsibilities that inspired the idea for Barb.

“Our receptionist was consistently running around during the day, and as a result our reception area was empty for large chunks of time,” said Fletcher. “Barb frees him up from our lobby so he can spend more time with us at the Desk.”

Of course, it’s also a nice way to show off the agency’s skills with voice.

Fletcher believes other agencies could benefit and even save money with their own Barbs, which is why it has open-sourced the technology. Some clients have showed interest, he said.

A Barb might benefit the lobbies of some ad agencies. One ad agency executive, speaking anonymously, said many ad agencies have already gotten rid of receptionists to cut costs. Still, he believes Barb is more of a marketing ploy than a business solution.

“It’s a marketing stunt, which they have been known for since inception,” he said, pointing out past examples such as the time Barbarian joked about selling its Superdesk on eBay. “They are doing this to signal ‘we are tech savvy and enabled.’”