Inside ‘The Awesome World of Advertising’ 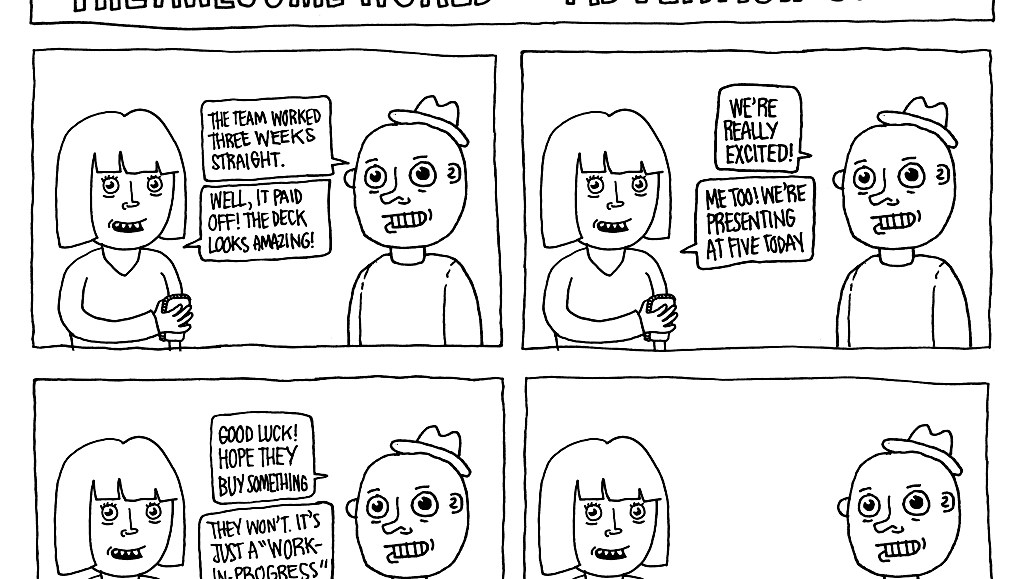 The Awesome World of Advertising is a Tumblr blog that features painfully funny comics about working at an ad agency. The agency creative who writes it remains anonymous. But Digiday recently spoke with the artist to find out more about the inspiration for the comics, what the best and worst parts of agency life are, what about the agency model needs to change and more. The result is a look inside the good, the bad and the ugly of the  not-actually-always-awesome world of advertising. Excerpts:

Why write this Tumblr?
The people that work in advertising are very funny in a strange way. I was just trying to make fun of something stupid that happened at work and emailed it to a few coworkers. One of them, actually a collaborator on the project, suggested I start a Tumblr page. I didn’t even know what Tumblr really was. I just thought it would be cool to have them all in one place.

Do people you work with know this is your Tumblr?
I still try to keep it somewhat secret. I got in trouble a couple times for making fun of work stuff, so that’s also why I try to keep it on the down low. I just think what we are doing shouldn’t be taken so seriously. I like the idea of this being anonymous because in advertising everybody tries to chase credit for this and that, being recognized at all costs and claiming stuff all the time. I like that this is just there, on the Internet. Recently someone emailed me to ask me if they could use the comics for an internal presentation, and it turned out we worked for the same company. That was funny.

What’s the worst part of being in advertising?
Dealing with a lot of stupid people that don’t respect the people they work with. Not sure it’s advertising specific, but I think it’s definitely the most annoying part of work. Also eating a lot of bad food.

What is the most frustrating part of today’s agency model that could be fixed ASAP?
People live in fear. Everybody is always under a lot of pressure — timelines and money and stuff. It gets very tiring and wears a lot of people out. I think we need to make working in advertising fun again, because that’s the reason why we got into it in the first place.

What should agencies do to keep talent?
Appreciate and respect the work the talent does for them. I’ve seen my share of disrespectful stuff in my short career, and I think it’s the No. 1 reason why people leave. And let people have a life too. Nobody can be a good creative by working 80 hours a week all the time. I really don’t believe in that. And, also, free food never hurts.