Apple’s crackdown on in-app tracking is starting to have a more pronounced effect on media spending.

Data from mobile ad tech startup Branch bears this out. Adoption of those newer versions was at 70% on June. 20 (see graph). 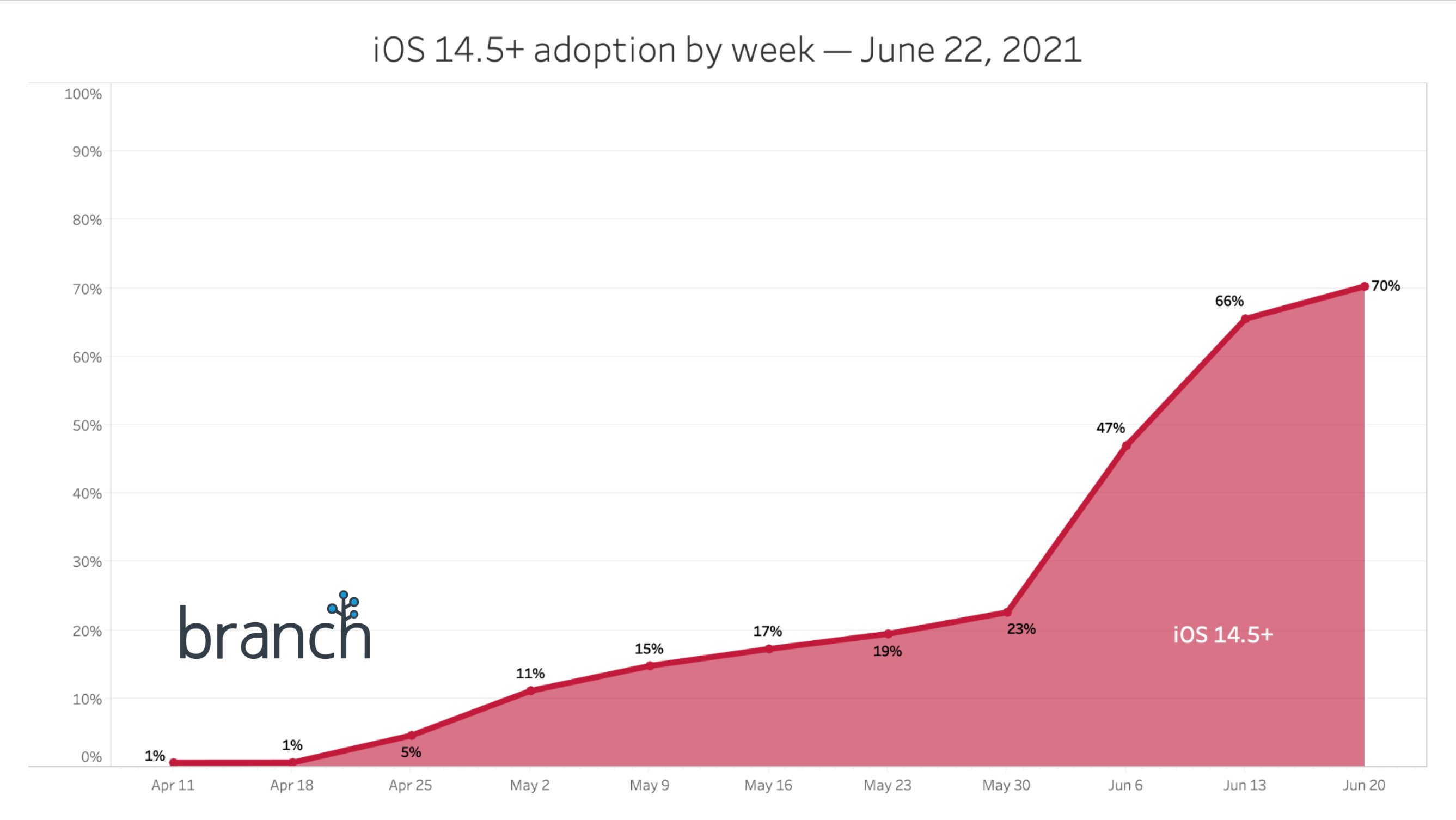 Previously, this wasn’t an issue as the ATT versions of iOS weren’t at critical mass. So the number of ad impressions available to marketers where they were automatically given access to someone’s data outweighed those where the ATT safeguard was presence. It was pretty much business as usual for many marketers.

Now, marketers have no other choice but to take their heads out of the sand and tackle ATT head-on.

Naturally, this is causing a reevaluation of where media dollars are spent. And increasingly those dollars are trickling through to Google’s Android devices where marketers aren’t limited in their ability to track which users click on what ads and whether those interactions lead to an install, purchase or some other downstream action.

“I concur with the same observation where we’re seeing an increase of competition on Android with more and more budgets being allocated,” said Jean-Sebastien Laverge, svp of growth at mobile game publisher Tilting Point.

The trend could become even more acute over the coming weeks. Before ATT arrived, clients of mobile intelligence business Appsumer, which tracks $500 million of annual ad spend across over 100 apps, spent a 60:40 split in favor of Android. Over the last two weeks (from May 31 to June 13), that split has edged up to a 62:38 ratio.

Smaller advertisers are driving at least some of this shift in spending. Marketers for those businesses have slashed spending on Apple’s iOS devices by seven percentage from a pre-ATT 2021 average of 31%. Similarly, Appsumer’s mid-size clients have dropped spending on iOS devices by 11 percentage points. However, the mobile intelligence firm did see a surge of iOS spending from this mid-size category before the ATT rollout, which does lift this average slightly above normal levels.

Still, that money is moving over to Android isn’t a surprise.

In fact, it was inevitable that advertisers would move at least some of their ad dollars from iOS where targeting and measurement is getting harder by the day to Android where advertising is easier. They were doing this as early as last August ahead of the original September 2020 launch date for ATT, per Adexchanger. The trend became more pronounced in the run-up to the revised spring 2021 date and has hardened ever since.

Between February 2 to February 7, marketers spent 56.16% of their budgets on Android app install campaigns and 43.84% on iOS, according to mobile measurement platform Singular global ad spend data totaling more than $1.5 billion. But last week, from June 14 to June 202, the split was 70.29% to 29.71%. Some of this swing can be attributed to artificially inflated iOS spending in the weeks and months before Apple released iOS 14.5. Marketers doubled down on iOS inventory while the IDFA mobile identifier was ubiquitous. But that spending spree only explains part of the story. Once ATT spread to more devices, marketers had to react. 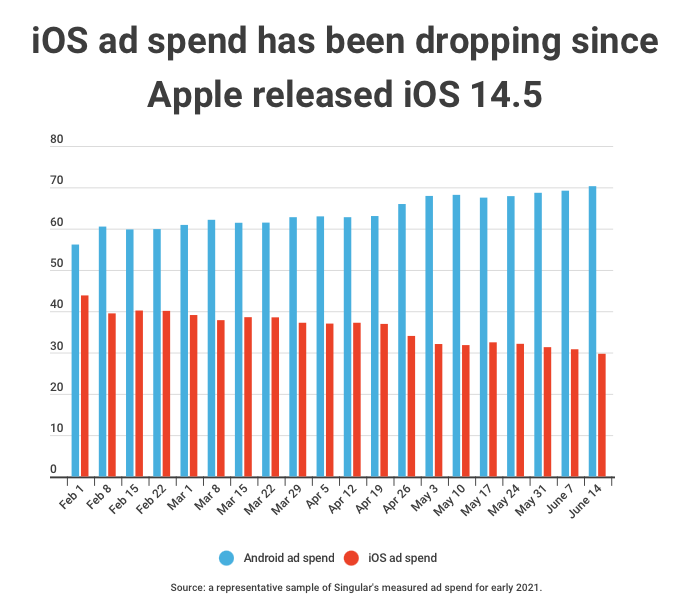 “While we’re only just now seeing 14.6 being pushed hard by Apple for users to upgrade, 14.5 didn’t really have a huge impact on spend,” said AdColony’s vp of global marketing and communications Jonathan Harrop. “In fact, the increase in spending on Android far outpaced the mild single-digit decreases on iOS which means spending is currently higher than usual. As more users upgrade their OS, and developers continue to update apps to invoke ATT, advertisers will continue to test, learn and adjust their strategy, especially to optimize SKAdNetwork campaigns.”

Unsurprisingly, ad prices are shifting as a result of media dollars being moved between the main operating systems.

“Now, part of this is to be expected because we’re always pushing toward that unified auction in-app where we’re making constant changes to make those auctions efficient to push CPMs up,” said Mike Brooks, svp of revenue at Groundtruth-owned weather app WeatherBug. “But the fact that our Android CPMs are higher now than they are on Black Friday tells us the at least some of that is being influenced by what’s happening in the wider ecosystem thanks to ATT.” 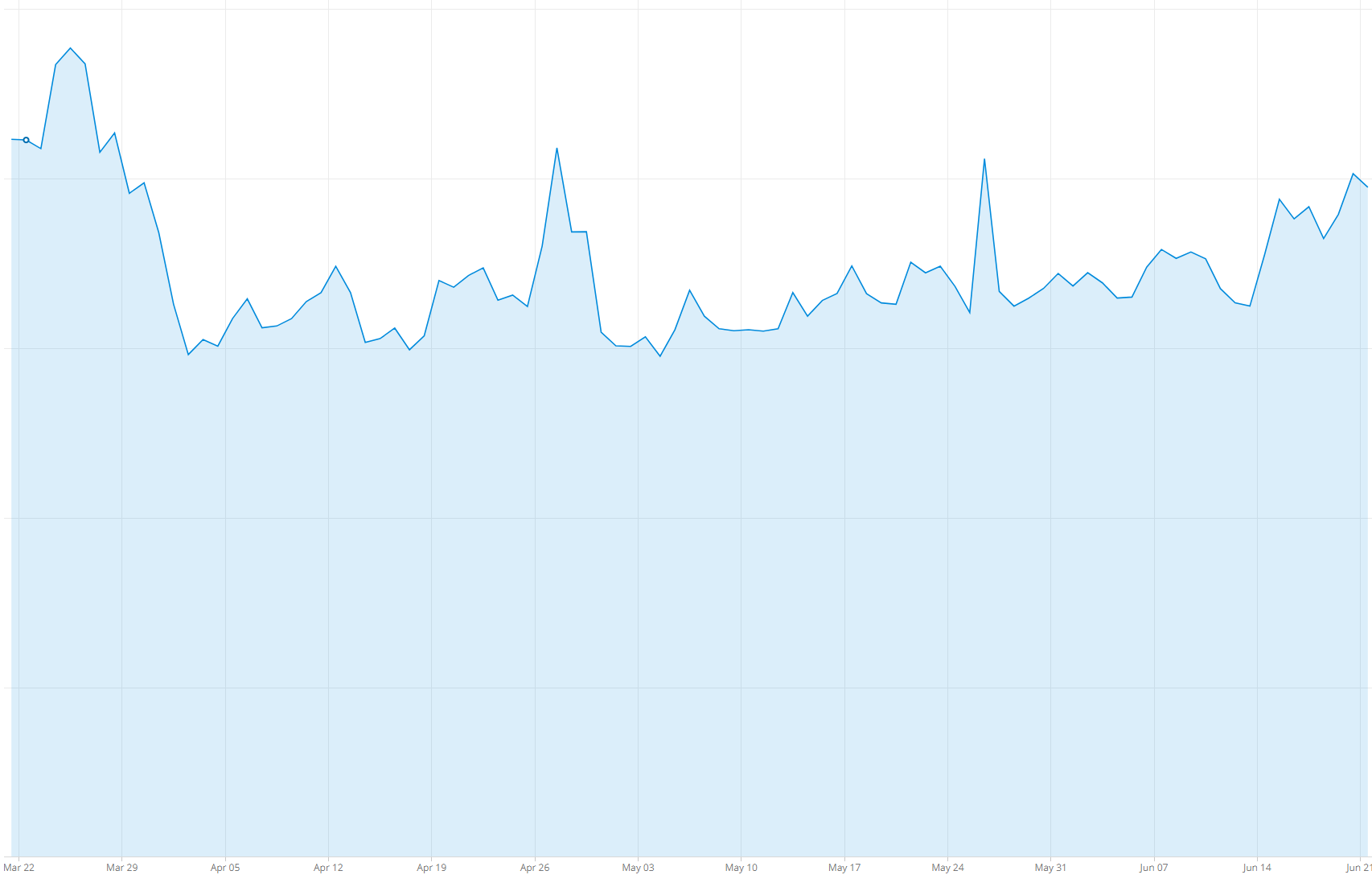 Take a closer look at the week ending June 6 (when the proliferation of iOS 14.6 really started to grow) and compare it to the week ending June 20 (when Blis saw around 50% of the iOS bid volume arriving with the newer ATT-enabled versions of iOS). Global Android CPMs are up around 2%; CPMs in the U.S. were up 12% and in Great Britain those prices rose 16%

As ever with all things ATT, however, nothing is straightforward. Sure, CPMs are on the rise — that much is true. But ad tech vendors like Blis were paying more for impressions back in March than now — likely the result of some specific campaigns. Standard shifts in bidding strategies like this could have as much of an impact on swings in CPMs as ATT.

“Basically, the CPMs we pay are a result of the CPMs we bid, and each campaign bids a bit differently,” said Blis’ chief technology officer Aaron McKee.

Bidding strategies aside, there are also the actions of publishers to consider here. Bid requests — the piece of code that tells a marketer there’s an opportunity to buy an impression on a site — are a good proxy for this.

Indeed, the volume of bid requests on all versions of iOS dropped in comparison to those on Android (in blue below) for the four weeks to June 20., according to Blis. Here’s how this trend played out in the U.S. 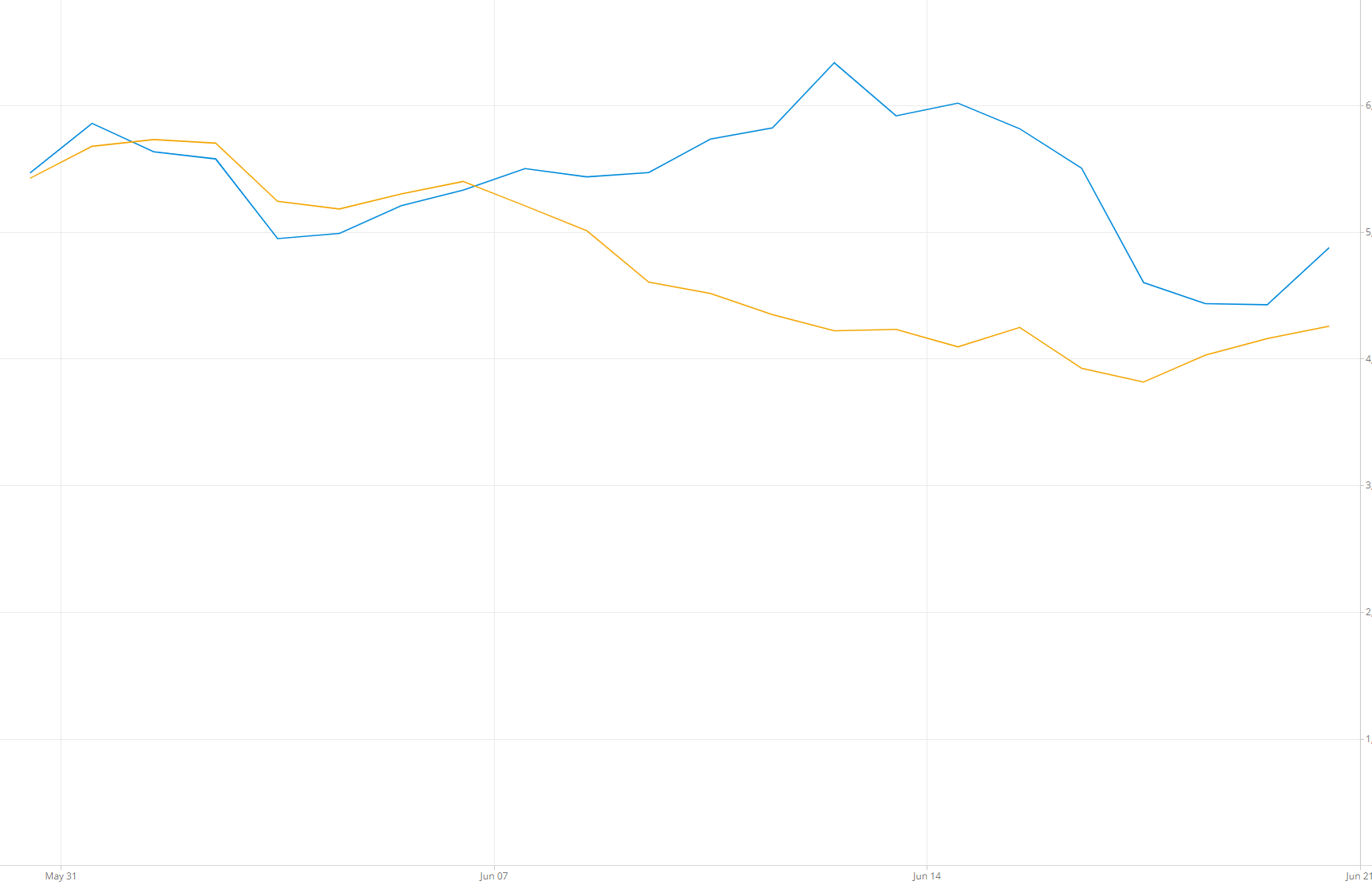 The volume of bid requests has been as much as 32% lower than Android over the past couple of weeks, with the delta coming from a reduction in iOS volume. Historically, the Android and iOS lines have been much closer for Blis — typically within about 5 to 10% of each other.

“We’re seeing a similar trend in the UK, as well, with around a 20% gap (iOS volumes lower),” said McKee. “We’ve not yet had a chance to complete analysis to say ‘why’ this is happening. It may be a result of some publishers shifting away from ad monetization and either not showing ads, or showing fewer ads, but it may also reflect choices made by SSPs over what type of inventory to send to auctions.”

Nevertheless, it remains to be seen as to whether these spending shifts are permanent.

Usually, performance marketers don’t tend to see too much difference between what they buy on both operating systems. In many ways, marketers bought ads on both iOS and Android to reach similar goals via similar audiences. That’s becoming harder. Measurement on iOS devices is blunted when marketers don’t have a mobile ideniifier to call on, which means its more expensive to reach users who are likely to click on an ad.

Now, marketers are having to ask themselves whether it makes sense to separate the two operating systems moving forward.