American Express will use ad targeting on NYC taxis 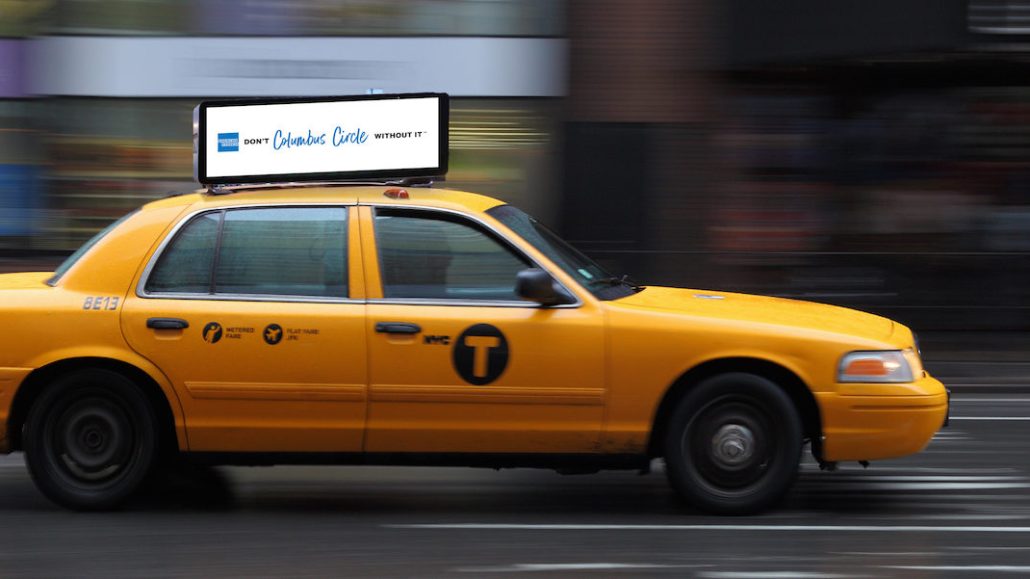 American Express plans to run ads on top of 125 taxis in New York City that will change messaging depending on the location of the cabs.

Whenever a cab passes the location of an American Express merchant in the city, the technology will tap into the cab’s GPS system and serve the correct ad for that company on top of the cab. This provides another line of revenue for American Express, which can charge these AmEx-accepting stores for these highly targeted ads. American Express is currently starting up negotiations with selected partners so there are no examples of companies onboard yet, said Joe Bihlmier, vp of global media at American Express. The ads are meant to send the message that American Express is connected with those businesses, he added. American Express doesn’t break down how many partners it has in New York, but the company has 18 million worldwide.

Geotargeting allows American Express to reach its target consumers where they are and serve an ad that is relevant in the moment. If there is no business partner nearby, the cab will show an ad that relates to the neighborhood the taxi cab is driving through. For instance, if a cab is passing through Columbus Circle, the ad would read: “Don’t Columbus Circle without it,” alongside the American Express logo.

The effort is part of a wider campaign, created by McGarryBowen, and new positioning for American Express that aims to connect with what Bihlmier calls the “hybrid consumer,” people who blend their personal lives with work. American Express commissioned research firm Morning Consult to conduct a survey of 20,000 people to see how many people were living hybrid lives, finding that half of the people surveyed were doing so.

That’s why the cab ads, other out-of-home digital ads and TV spots for the new campaign feature business products alongside consumer products with the messages: “Don’t Live Life Without It” or “Don’t Do Business Without It.” The ads feature people multitasking as well. The company is also serving ads in digital channels that connect life and business like WeTransfer, across mobile, in 20 different podcasts and on Hulu.

Bihlmier said the campaign will be the company’s widest use of geographical targeting to date. American Express has previously used the technology around large-scale events such as Coachella, the U.S. Open golf tournament and the U.S. Open tennis event, mostly through Snapchat geofilters to target Generation Z and millennial attendees with relevant offers.

Overall, out-of-home advertising is becoming a larger piece of American Express’ ad spend, according to Bihlmier, although he wouldn’t reveal specific numbers. This recent push comes as out-of-home advertising, especially digital, has returned to the forefront of the media-buying conversation, thanks to the news last week that Netflix is verging on acquiring Regency Outdoor Advertising for $300 million. The acquisition would guarantee the streaming service premium real estate on billboards in the Los Angeles and Orange County area.

Bihlmier believes digital out-of-home ads that change their messages, like the American Express cab ads, will help the company stand out to the affluent, cosmopolitan audience that the majority of marketers are trying to reach, said Bihlmier.

“We have a complex challenge of trying to reach these very busy and well-targeted people,” said Bihlmier. “So anything we can do to be contextual to the moment will help us break through.”