All creators want for Christmas is… the ultimate platform 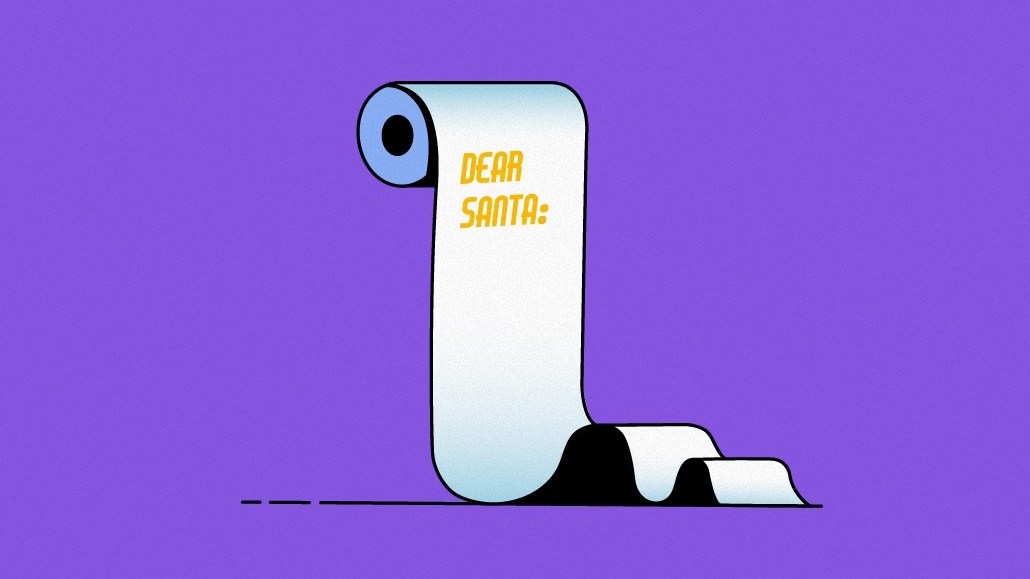 We wish you a Merry Christmas and a happy new… platform!

As creators are a top priority for platforms, advertisers and brands, we wanted to hear what’s on their Christmas wish lists.

Digiday spoke to eight creators, some of whom are represented by X1 Talent.

So if Santa (or the platform dev teams) are listening, here’s what presents they’d love for Christmas from the platforms.

Given that creators heavily rely on being found through their social profiles to build their cult followers, it’s understandable why they’d want the best possible algorithms to make that discoverability easier.

Twitch streamers in particular have called the platform’s discoverability algorithm less than desirable compared to YouTube and TikTok.

SakiSakura, who currently has 5.4K followers on Twitch, said she wants to see the platform have a discoverability algorithm similar to YouTube where “it’s easier for people to be seen”, while creator IAmBrandon, who has 41.9K Twitch followers, noted TikTok is one platform that has actually made this possible.

“If streamers don’t have a big following on Twitch but they go on TikTok and make funny videos, they can gain a ton of followers pretty quickly and start their creator career much faster,” IAmBrandon said.

Safety and moderation are perennial issues for creators and users. But this year, they’re arguably more topical following the furore over the infamous Twitter takeover by self-described “free-speech absolutist” Elon Musk. So much so that a number of advertisers have pulled their ad spend in response. But this isn’t just a Twitter problem. Big question marks remain over moderation and how data is stored and handled on TikTok. That said, it’s still one of the top platforms of choice for creators and advertisers.

With this in mind, creator Camillapanda, who has 3.4K followers on Twitch, advocates for creators to protect their peace and remove followers who make them feel uncomfortable. So for Christmas this year, she’d like the platforms to finally create a shared ban list. “If I ban/block someone on one website, I want it to be universal,” she explained. “I know it wouldn’t be a perfect system, but knowing it would be harder for someone to follow me on a different platform would be great.”

Similarly, IAmBrandon noted issues with Twitch streamers moving onto TikTok. “There’s a lot of things creators need to protect themselves which aren’t available,” he said. “We can’t get rid of comments if we don’t want something to be seen, for example. And the people who moderate our chats can’t really do much, so it’s difficult for us to keep our community safe from trolls.”

Back when social platforms first emerged, they were far more focused on building solid communities of like-minded people, before they became places where individuals sought fame and fortune.

IAmBrandon openly admitted to missing that aspect. “The raw community element really made you value the viewers who watched you and the networks of people you’d be around,” he said. “You really got to make friends and connect with people on a different level from all over the world, which you may not have been able to do in real life.”

Creators want platforms to stop being the grinch. After all, they earn a living from creating content.

But Twitch streamer Imfamousx1x, with 3.7K Twitch followers, has suggested a jolly solution for the scrooges.

“I’d like to see a mid tier partner program on Twitch and even YouTube,” she said. “It would help to build morale and stop this grind culture, a better system that could be incorporated into the funding models. Advertising rev share deals are the new hype, but there has to be a better way to not only incorporate them, but better ways to apply and be involved in promotional events rather than the current random selection processes.”

But what about other platforms?

Another creator, CamillaPanda, who has 3.4K, 1,389 and 1,558 followers across Twitch, Twitter and TikTok respectively, would like to see a larger sub-split on Twitch and more cash added to TikTok’s Creator Fund.

“Having something similar to Instagram’s Bonus program on top of TikTok’s Creator Fund would be incredible because then we’d know how much money to expect each month,” she noted.

A big part of being a creator isn’t what their audiences see. It’s the behind-the-scenes business element which enables them to continue to hone their crafts and deliver the goods to their followers.

Twitch streamer TCFreer, who has 17.8K Twitch followers, believes social platforms could learn from what Facebook’s business suite provides. “Although Meta isn’t particularly described as a nice company, it is far more responsible when it comes to what creators can earn from various content they produce.”

That said, Camillapanda wishes Meta would enable more freedom and separation between its platforms. “I’d love to not need to use the Facebook business suite of tools to connect my Instagram account to various things,” she said. “To use any third-party analytic websites or content schedulers, you have to swap your account to a business account, link it to a business Facebook page, and ensure it is all set up correctly in Meta’s business suite. I would love not to have to do all of that just to give API access to other websites. I understand Instagram is owned by Meta but I would love to not have to jump through hoops to do a few simple things.”

And then there’s LinkedIn.

According to Amelia Sordell, who is a top LinkedIn figure with more than 130K followers on the platform, LinkedIn’s analytics are poor compared to other social apps because creators have to pay for a separate plug-in to track their analytics.

“I’d love to see LinkedIn take charge of incorporating granular analytics of posts, overall impact — like who is looking at your content, where they come from and what their job title is,” she commented. “Imagine if you could view all of that data and specifically target people with the content you’ve tracked they relate to all in the platform? Amazing.”

Of course, no platform can work effectively without the collective effort of little helpers on the back-end, where the magic happens. TCFreer believes the perfect streaming platform would incorporate the ease of navigation of YouTube, and the constant saving, archiving and user friendliness of YouTube when it comes to post-broadcast.

“YouTube has a phenomenal upload capability in terms of the bandwidth it accepts whereas Twitch is very limited,” he explained. “When you’ve finished a broadcast on YouTube, you can chop and change it, all on the platform which is good, but it takes a lot of time for the platform to process each video.”

Sordell would also like to see YouTube remove ads from the beginning of videos because in-video ads work much better for both creators and users as well as from a watch time perspective. “People are more likely to bounce immediately because they can’t be bothered to watch the ad first,” she noted.

And for those that wish it could be Christmas every day, these creators have come up with a number of sparkly stocking fillers by way of cherry picking the best parts of each platform’s model to create the ultimate app.

Influencer Danielle Gilbert (@danigmakeup), who has 574.5K and 187K followers across TikTok and Instagram respectively, said she wishes TikTok’s own Stories function was more like Instagram’s. “With Instagram Stories, you can get a lot more personal with your followers through your stories and have a proper chat there. But TikTok’s version hasn’t really taken off in the same way.”

While Sordell predominantly uses LinkedIn, she does wish she could search specifically for stitches of a certain video on TikTok, where she currently has 5,647 followers. “One of the beauties of TikTok is the virality of audio and video trends — being able to easily search the replies to those trends would be awesome,” she commented.

Similarly, influencer Sophie Hughes (@sophwithlove), who has 31.8K Instagram followers, would love the platform to incorporate a writing element. “I’ve always loved that you could go in depth with a caption on Instagram and really engage your audience,” she said.

But of course, that’s lost its sparkle over the last six months or so as content has become much faster paced and video based, especially with the rise of Reels.

“I’d love Instagram to have more of a focus on the messaging and words, not just imagery,” added Hughes. “There are some really powerful words on Instagram that I think are starting to get missed. So it would be really cool if you could almost have a blog feature in Instagram so the messaging could be shared in a more poignant way.”