Reasons for agencies to give thanks, in 5 charts

The ad agency business may have its share of challenges, from consulting companies eating their lunches to an ongoing talent squeeze, but it’s the season to be grateful. So agency folk, spend some time at your Thanksgiving dinner table giving thanks for these stunning figures.

Ad spending is up.
According to ZenithOptimedia’s most recent advertising spending forecast, the global market will have grown 5.3 percent this year to $523 billion, up from 3.9 percent in 2013. The agency also expects growth to “remain strong” over the next two years, rising to 5.9 percent in 2016. In the U.S., eMarketer estimates that total media ad spending will grow the most it has in the past decade, hitting a 5 percent growth for the first time since 2014.

You’re in demand.
Don’t get lost in the layoff stories: Agency employment is up. According to the Bureau of Labor Statistics, ad-agency employment in 2014 was 190,600, the highest it has been since 2001. (It hasn’t reached the levels it was at in the halcyon days of 2000, when agency employment was at 207,400.) And the growth keeps coming: Employment of what the BLS calls “advertising and promotions managers” is projected to grow 7 percent from 2012 to 2022. 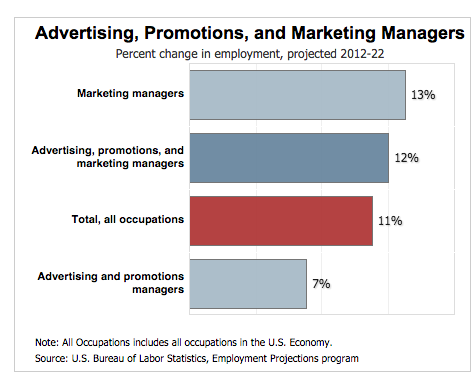 Give extra thanks if you’re in digital.
Where’s the growth? Figures reported by Ad Age’s annual agency report, citing numbers from the BLS, shows positive growth in every type of agency. But digital is still the brightest spot: Employment in the U.S. digital media industry jumped 12.5 percent this year. Public relations agency jobs are also at an all-time high.

Lots of types of agencies are doing well.
Within the agency world, revenues were up across every agency type except media, according to Ad Age’s agency report. Media agency growth was flat (after excluding non-digital operations), while ad agencies grew 1.8 percent. CRM and direct grew 5.2 percent, while healthcare agencies were up 4.9 percent.

But the huge jumps were in media agency digital growth.
At Publicis, share of digital revenue in the year to date at the end of Q3 was 41.6 percent, compared with 37.6 percent at the same period last year. At WPP, most of the revenue is coming from digital media platforms. This year, WPP attributed most of its growth to media units like Xaxis.

Agency stocks are also on an upward trajectory, hitting all-time highs in 2014, according to Pivotal Research analyst Brian Weiser, who noted that Omnicom and WPP performed exceptionally well. Below, a chart shows their performance over two years, compared with the S&P 500 index. 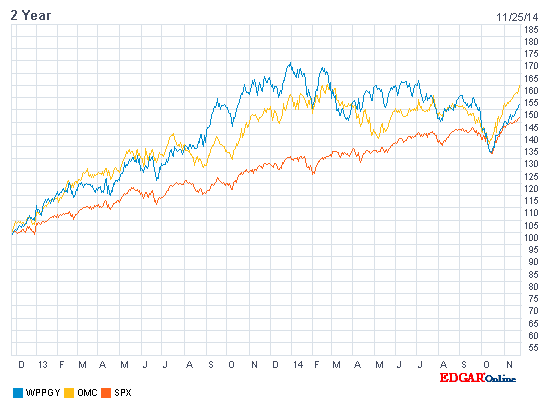