‘A different language’: Why venturing into meme-based marketing can be risky for brands 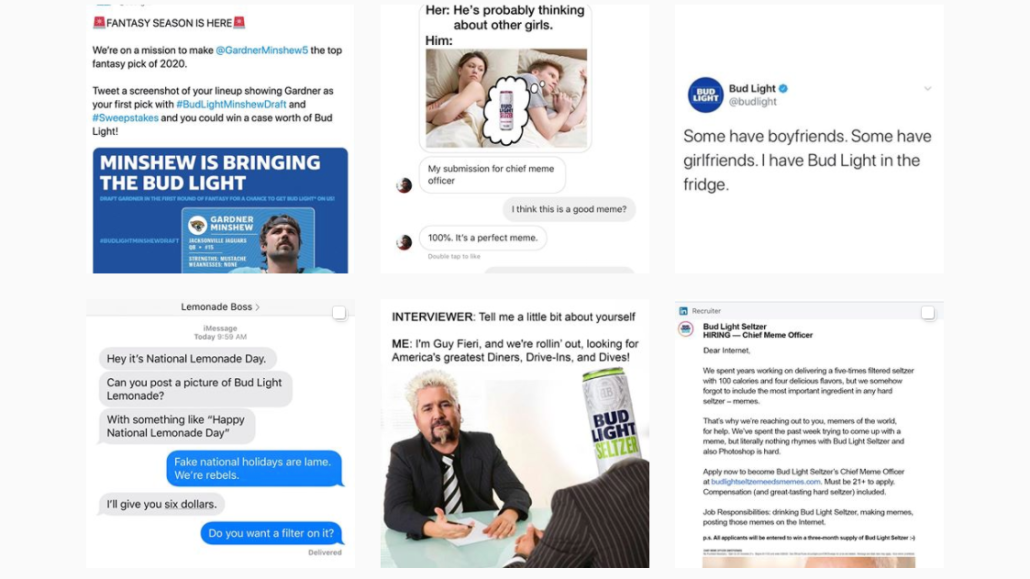 Over the last year, Bud Light has been posting memes to its social accounts and working with influencers to create them on a regular basis. Doing so has helped increase positive brand sentiment, helped the brand grow its social following as well as increased engagement, according to Conor Mason, senior director of digital marketing for Bud Light.

It makes sense then that the company is investing more in meme marketing: Last week, Bud Light posted that it was seeking a different sort of CMO — a chief meme officer that will work with the company’s marketing department to create memes — on Instagram. Naturally, the brand leveraged meme accounts like FuckJerry to boost awareness of the job posting.

“As people are learning to tune out advertising more and more, which is a trend everyone is aware of, your organic social channels become more important,” said Mason, adding that using memes to grow the social following for Bud Light makes sense as it is a “fun, lighthearted” brand.

Bud Light is one of a number of brands that has been diving deeper into meme culture. Others like Dr. Squatch and Bumble, among others, have also leaned into memes over the last year or so. And this past winter, the Bloomberg campaign made headlines for its cringe worthy meme campaign as the memes attempted to be self-aware but came off as trying too hard.

“Done right a meme is an effective wink and a nod to your consumers, ‘We get it’” said Alex Sturtevant, director of brand at Stink Studios. “A lot of brands still have shockingly old fashioned approaches to social media. When a brand is simply posting cut-downs of TV commercials or trying to get users to use a long and clunky branded hashtag, it just comes across as out of touch. Using a meme, a way of communicating born from social, can be a way to actually engage with your audience in a fun and meaningful way.”

But while brands are making the jump into memes content to reach younger consumers the reaction to brands doing so is a mixed bag. That’s because brands are using a content type dominated by younger audiences made up of references and jokes that brands may not be aware of. Basically, brands can seem like they are trying to get in on a joke they are unaware of — or they might be, or become, the joke.

“Memes are a different language than brands are used to—filled with references to coded jokes and asides to other memes or cultural references,” said Kuba Kierlanczyk, director of insights and strategy at brand consulting firm Kelton, adding that he has yet to see a successful brand meme.

While branded memes haven’t reached become the butt of a joke like the Bloomberg campaign memes, making memes that don’t land the joke or don’t stick out can also be an issue. The problem is that some brands lean on the simplicity of the format by finding a GIF or picture to put text on that works for a brand message rather than trying to understand what memes mean will be more at risk of being laughed at.

“Simply hollowing out a meme format and inserting something about your brand in there (example: ‘That face when product X is on sale’) is something younger consumers will likely see right through and reject,” said Kierlanczyk.

“You can’t just make memes and expect to not show up on [the Reddit community] r/fellowkids,” said Evan Weissbrot, founder of social consultancy BIOS. “Brands historically have not been welcome in this world.  It takes a level of commitment to breakthrough authentically. We built Slim Jim from 5,000 to 1.1 million followers [on Instagram] (without a single penny spent on promotion) on the back of razor sharp memes that didn’t feel like they were coming from a brand.”

As brands invest more resources into memes, agency execs say the key is to figure out how to make memes that feel like memes rather than ads. Memers and meme pages have been able to leverage their massive followings massed on memes to create organically upstart brands. For example, The Fat Jewish built the wine brand Babe Rose and sold that to Anheuser-Busch for last June.

Memes and memers can build “massive communities” that can be  “leveraged to drive awareness and sales,” said Brendan Gahan, Chief Social Officer at Mekanism. “This space is only going to get bigger.”