5 brands that are taking Leap Day way too seriously

Today is Leap Day and brands don’t want to let you forget it.

The day — just another ordinary Monday lightly masquerading as a holiday — is, of course, an extra day added to the end of February every four years as a way to cut down the solar system’s disparity with the Gregorian calendar. It’s also another day for brands to bombard you with gimmicks and hashtags. Just like the Gregorians would have wanted it.

Here’s how five brands are jumping into Leap Day:

NBCUniversal and American Express
During some of NBC’s shows, including “Today,” “The Voice” and “Blindspot,” American Express is buying the commercial blocks and showing “custom show content.” The release describes it as “behind-the-scenes access,” so it sounds like DVD extras nobody watches with the American Express logo slapped onto it.

However, it’s the first time NBC is tapping into its $200 million stake of BuzzFeed since the site’s creative team is designing the social content. Just think how “30 Rock” would lampoon this idea if it was around to produce another Leap Day-themed show. 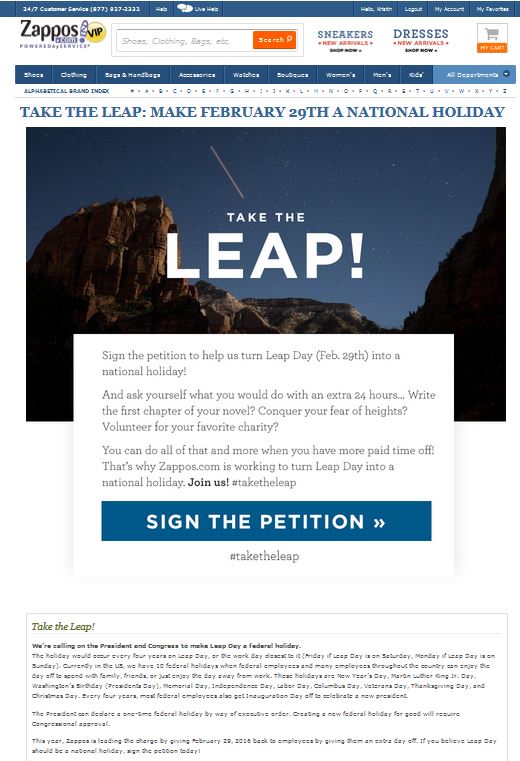 No holiday goes unnoticed without a quirky hashtag from Zappos (remember #DadsDayOff?). Zappos is giving all of its employees a paid day off “in hopes of inspiring employees and consumers to #TakeTheLeap” and use it to do something they’ve always wanted to do. Which is eerily reminiscent of REI’s equally hashtaggerful #OptOutside day on Black Friday.

Zappos is covering its homepage with a link to a Change.org petition to make Feb. 29 a national holiday. Also, two employees are showing they’re really on board with the event by getting married in a ceremony officiated by CEO Tony Hsieh. At least the party favors will be worth it.

Uber, but for wings instead of puppies? Red Bull is once again deploying its street team on Monday to send out wings in an event called #WingsAtWork. Brace yourself for people awkwardly posing in feathers with those Red Bull employees all over Facebook and Twitter.

Travelzoo
If this is all making you want to flee far, far away from the Internet, then Travelzoo is here to help. The flash-sale travel site is publishing a list of offers only available on its app Monday at 11 a.m. Eastern Time, which includes discounted Hawaiian hotels, half-off packages to India and cheap Caribbean flights.

“Leap year only comes around every four years, but when it arrives, it means companies have an extra day in their calendars where they must sell millions of hotel rooms and airlines tickets,” Travelzoo said in a release although “must” sounds a tad hyperbolic.

The meat factory is masterfully trolling vegetarians and selling sandwiches without any meat. As discussed on Thursday, the “Beef ‘n Cheddar Classic Sandwich” is more of a cheddar sandwich since it’s sloppy cheese on a soggy bun and the “Crispy Fish Flatbread” is lettuce and tartar sauce also on a bun. Mmmm?