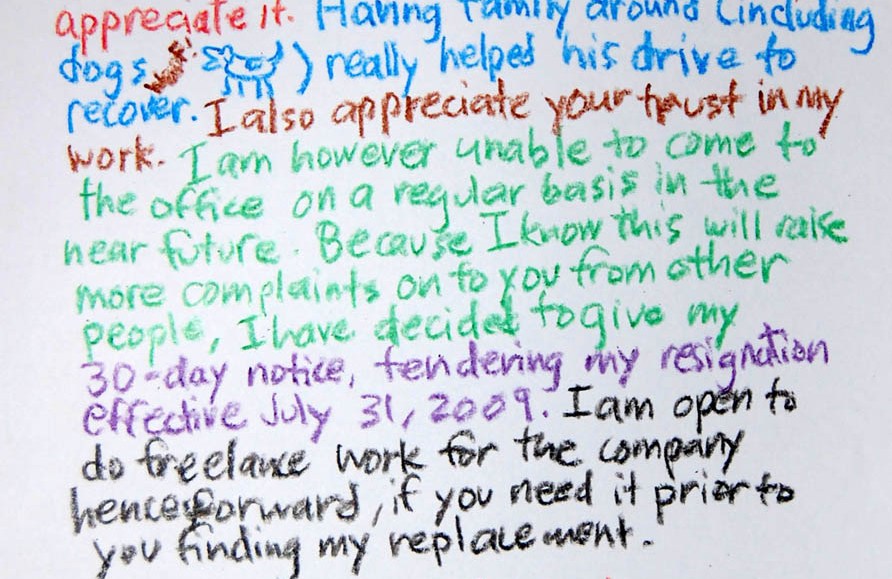 The resignation letter is an art form. If you have any doubt, see this (rather profane) approach.

Here are five of our favorite agency resignation techniques, ranging from the creative, to the incriminating, to the downright bizarre:

1. The Hatchet Job
This media planner at MEC London pulled no punches with his resignation letter, accusing his boss of anti-semitism, having “sexual relations” in the office, and “ruining” eight months of his working life. Digiday quibble: Kieran buried the lede by not mentioning the after-hours meeting-room fornication until third-to-last paragraph. (Image from Dropbox)

2. Might As Well Jump…
When Eric Silver left his role as chief creative officer at DDB New York, he chose to do so with a simple signed and dated, handwritten letter. Oh, and a sketch of the Van Halen logo because, well, why the hell not. (Image via Creativity) 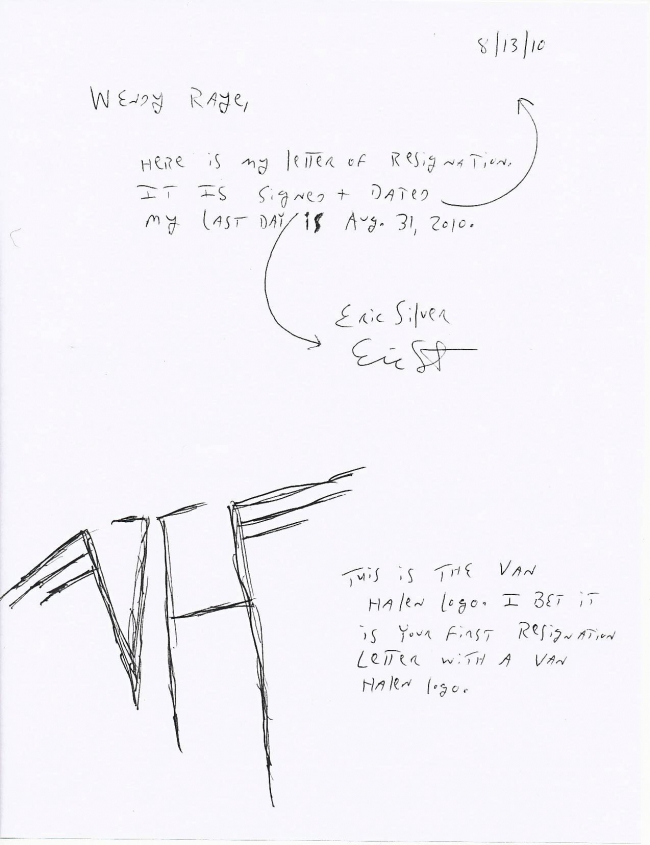 3. The Blaze of Glory
In a similar vein to the MEC staffer above, this media planner at an unnamed Chicago-based agency used a resignation to air some opinions about his or her employers, salary, and colleagues. “With the hours I log in a given week I don’t even make minimum wage,” the staffer professes, adding, “I’ll bet if I asked to be promoted to Senior Media Planner Ninja-Czar, I’d get a pay freeze until 2020.” Boom! (Image via theCHIVE)

4) The Sesame Street
If you’re unsure about how your resignation will be taken, why not deliver the news in crayon. (Digiday is a big believer in the Power of Crayola.) For maximum effect, mix up the colors, too, but make sure the part about your freelance availability is in black so they know you’re serious. (via PositiveSharing)

5) The Corporate Suicide
Or, if you’re finding it tough to pluck up the courage to hand in that resignation letter, then just do your best to get fired instead. Before becoming a full-time author, Sherwood Anderson wrote copy for Chicago-based agency Taylor Critchfield Co. In 1918, he was finally able to quit the day job and to devote himself entirely to his passion, at which point he penned the following letter to his boss, Bayard Barton. (via LettersofNote.com)

You have a man in your employ that I have thought for a long time should be fired. I refer to Sherwood Anderson. He is a fellow of a good deal of ability, but for a long time I have been convinced that his heart is not in his work.

There is no question but that this man Anderson has in some ways been an ornament to our organization. His hair, for one thing being long and mussy gives an artistic carelessness to his personal appearance that somewhat impresses such men as Frank Lloyd Wright and Mr. Curtenius of Kalamazoo when they come into the office.

But Anderson is not really productive. As I have said his heart is not in his work. I think he should be fired and if you will not do the job I should like permission to fire him myself. I therefore suggest that Anderson be asked to sever his connections with the Company on August 1st. He is a nice fellow. We will let him down easy but let’s can him.