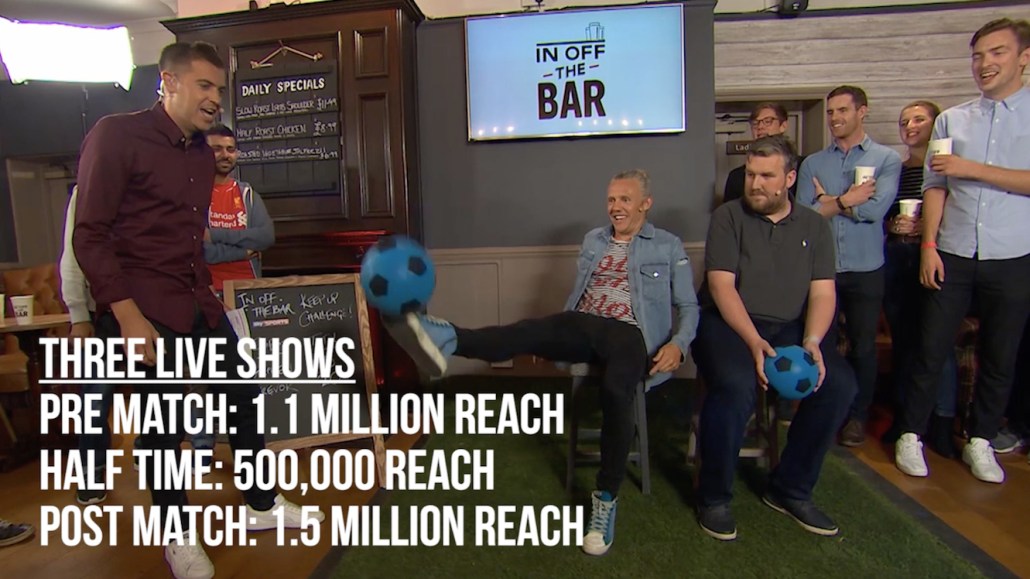 World Cups have always been somewhat of a moot point for Sky. Football’s biggest event must be shown on free-to-air channels in the U.K. due to strict regulations, meaning the commercial broadcaster misses out on the lucrative TV budgets pumped into the matches. But since the 2014 World Cup, social video has become central to how younger fans watch sports, and Sky sees a chance to win a larger slice of budgets.

Previously, the broadcaster hadn’t done enough to push its social media credentials to brands and agencies in the absence of TV rights, said Jason Hughes, head of Sky Media’s creative solutions. Instead, display and bespoke native ads were Sky’s main ways of monetizing the tournament online.

For this year’s World Cup, Hughes and his team are pushing social media, particularly the organic reach Sky can generate from it, to advertisers. Just 1 percent of Sky Sports’ interactions on Facebook came from promoted posts between Jan. 1, 2017 and Jan. 1, 2018, while posts that linked outside of Facebook to Sky Sports sites were the most popular content type over the same period, ahead of video and photos, according to Socialbakers.

“We’ve known for some time how important our social media channels have been at driving traffic back to our sites,” Hughes said. “But from a strategic perspective, we’ve not done enough to show that expertise.”

Sky’s pitch to advertisers sorts World Cup campaigns into pregame, in-game or postgame slots, depending on advertisers’ objectives. For a pregame slot, an advertiser could produce a show like beer brand Carling’s “In Off The Bar” with the broadcaster’s presenters such as Max Rushden to riff on the buildup to matches. Another brand might want to do something away from the games and be matched with influencers, whom Sky has employed to produce short videos reporting on fan culture around the tournament.

Sky will use its influencers from its chat show “Soccer AM” and Football Daily, the YouTube channel Sky acquired when it bought social content producer Diagonal View last March. Diagonal View’s channels will add more than 15 million subscribers to Sky’s own following, which it said amounts to around 11 million monthly unique users.

Hughes said branded campaigns will run across all its own sites and social media channels, including Snapchat, YouTube and Twitter. Sky Media won’t prioritize one platform, he added, though he did talk up livestreaming on Facebook Live. Facebook Live, which launched in 2016, struggled to win over much of the sports media industry in 2017, but Sky continued to experiment with it. The broadcaster considers livestreaming on social networks a way to reach younger audiences, which may not subscribe but can be sold to advertisers.

While branded social video will be Sky Media’s main focus for the World Cup, the broadcaster will also offer to turn ads into sequentially targeted campaigns using its AdVance platform and addressable TV inventory via AdSmart. “When we talk to advertisers, it’s not so much the decline in viewing that they’re interested in when it comes to discussion about social video,” Hughes said. “It’s about being savvier about following that customer journey.”