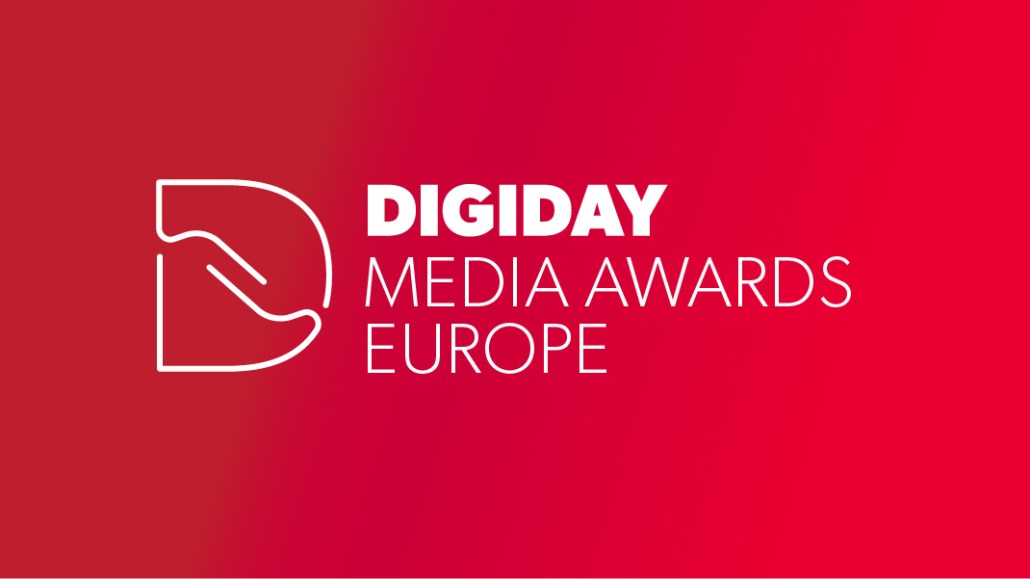 Millennial women’s publisher Refinery29 UK is Publisher of the Year at the Digiday Media Awards Europe.

Refinery29’s U.K. arm, launched in 2015, has made an impact by covering women’s issues such as the criminalization of upskirt photography and representation of periods in the media.

The Digiday Media Awards Europe is a new Digiday awards program that recognizes companies modernizing European media. Other winners include Vice UK for Video Team of the Year; Reuters for Best Use of Technology for its Reuters Connect content platform; and The Times of London for Best Use of a Podcast and Best Email Newsletter.

View all of this year’s winners below.

Publisher of the Year
Refinery29 UK

Publishing Executive of the Year
Melissa Chapman, CCO, Jungle Creations
As the third hire at video creation company Jungle Creations, Chapman has overseen the growth of the company from its first days to being the second most viewed company on social media, above the likes of BuzzFeed, LADbible, Group Nine Media, UNILAD and Disney.

Best Social Video Campaign
Ladbible Group – “Trash Isles”
To draw attention to lethal levels of plastic in the world’s oceans, Ladbible Group encouraged young people to sign up as residents of the Trash Isles, the first country made out of trash. By becoming a country and a U.N. member, the Trash Isles would be protected by U.N. environmental principles, obligating other countries to clean it up.

Best Use of Technology
Reuters Connect
Reuters Connect is a digital content platform available to journalists, partners and other customers that houses all Reuters’ 14 million pieces of content, including interactive graphics, videos, photos and visual archives dating back to 1896.

Best New Vertical/Brand
Football Whispers
Football Whispers, launched in 2017, uses proprietary sports data and engaging visuals to deliver detailed analysis of every aspect of a football game. Its first algorithm was Transfer Index, which predicted the likelihood of a transfer, and it has since added six more algorithms, including Player Values, Predicted Lineups and Player Ratings.

Best Use of a Podcast
The Times of London and Sunday Times – “Walking the Dog”
The Times put a spin on the celebrity interview, inviting prominent British celebrities like presenter Jonathan Ross, former football player Gary Lineker and comedian Sarah Millican to speak candidly about their careers, personal lives and, of course, their dogs.

Best Use of a Messenger Bot
MummyPages – Pregnancy Bot
MummyPages, Ireland’s leading website for new and expectant mothers, developed a bot in-house that would deliver information whenever a woman requested it, then ask her how she feels and tailor information to her based on her responses.

Best Email Newsletter
The Times – Red Box daily politics briefing
Started by the Times after the 2014 U.K. general election, Red Box is a daily political briefing that aims to explain why political events occur and their importance. It also promotes the Times’ political podcast, also called “Red Box,” and subscriber-only Times+ events held around the U.K.

Best Branded Content Program – B2B
WP BrandStudio and Siemens – “Defending Against a Cyber Attack”
To build Siemens’ recognition as a cybersecurity leader, WP BrandStudio created a 3D experience where users learn how a cyberattack occurs and how to limit these risks.

Best Mobile Innovation
Gatwick Airport Official app
Gatwick Airport wanted to create a more useful airport app for the millions of people that pass through each day. The app surfaces useful features of the airport for travelers, including a mobile-friendly reservation system for the airport’s parking lots, augmented reality wayfinding through the airport and the ability to purchase a fast pass through security queues.

Best Custom Advertising
Snickers and Spotify – “The Hunger Spotter”
To refresh its 5-year-old slogan, Snickers worked with Spotify to identify when streamers weren’t listening to their usual music genres, and Spotify then served them Snickers ads with the familiar “You’re not you when you’re hungry” messaging.

Best Live Moment
Social Chain and Superdry – Firestream
U.K. clothing retailer Superdry capitalized on the social spectacle of the U.K.’s Bonfire Night on Nov. 5 by aiming to blow up a Superdry-branded Volkswagen Beetle filled with fireworks. On Facebook Live, users commented “FIRE” to ignite a fuse leading to the car. The payoff was £250 ($332) in Superdry vouchers.

Most Innovative Web Platform
Appsumer
Appsumer is a unified data intelligence platform that calculates return on investment on ad spending for performance marketers in the mobile space.

Best Native Advertising Platform
Strossle – Zoznam Audience Boost
Concerned about the duopoly’s influence on audience traffic, Zoznam, one of Slovakia’s top media companies, turned to Strossle, an audience-sharing platform that uses AI to market content to other, relevant audiences in a publisher network. Zoznam saw higher user engagement from other media sites than from platforms.

https://digiday.com/?p=289374
Most Read
Trending in Publishing in the Platform Era
Digiday Top Stories