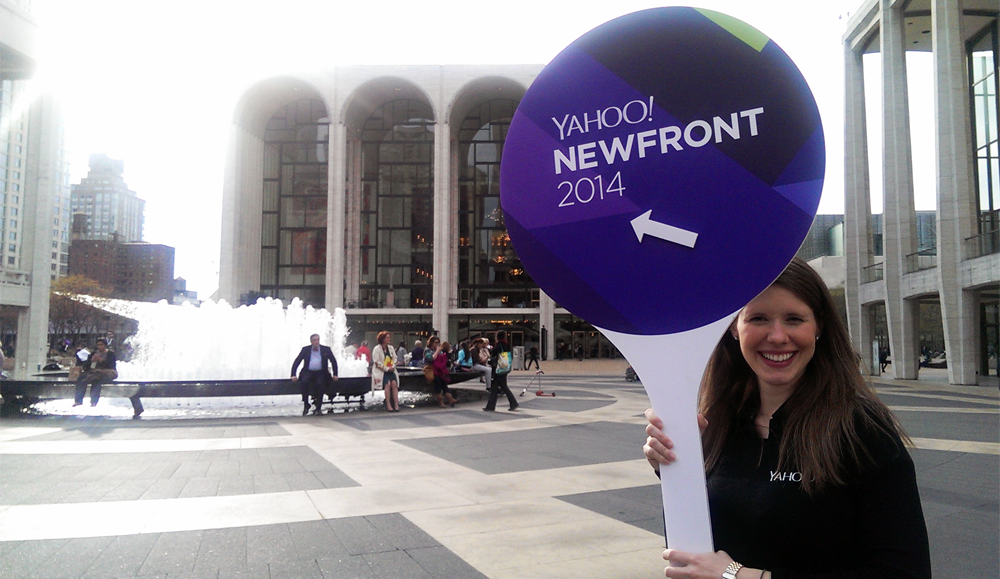 Yahoo, a Web company, is eager to grab a piece of the TV advertising pie. At its NewFronts presentation on Monday, the Web portal gave a splashy, often overwhelming overview of both its video efforts and its new ad products, the combination of which it hopes will bring big-name brands into the fold. Here’s what the portal had to say.

The core of the strategy: Yahoo wants to attract TV ad budgets, so it’s making TV programming. Its new shows — “Other Space” and “Sin City Saints” — are both a half hour-long, and will be joined by similarly lengthy programs in the next few months. Yahoo also introduced two new shows from global news anchor Katie Couric, who signed on last year. On the live video front, Yahoo inked a deal with concert vendor Live Nation to produce 365 live shows, one for each day of the year, starting this summer. It’s signed Kellogg’s as an early sponsor.

Yahoo showed off more than just video, though. Core to its pitch to advertisers is that it offers an end-to-end ad solution that combines video, search, display, and native ads in one package. In a bid to get more TV buyers interested, Yahoo partnered with comScore, which will help it deliver TV-comparable metrics for digital video, display and mobile ad campaigns.

Prospects for success
Yahoo is huge. Over 700 million people access its properties every month, giving both its content and advertising efforts enormous scale. It’s also the fourth-biggest seller of online ads in the US. All of this together makes whatever Yahoo does hard to ignore.

The one problem is that, while Yahoo talked a lot about its upcoming video programming, it didn’t actually show any of it. In fact, most of the video content Yahoo pitched won’t actually appear until next year, meaning that right now Yahoo is pushing ad buyers on content that is months away from reality.

For a company whose core business is apparently worthless, Yahoo sure went out of its way to exude opulence. The event’s Lincoln Square locale was decked out in Yahoo-purple, and visitors we’re treated to both an open bar and an ear drum-rupturing speaker system. Gifts were in abundance. Yahoo gave attendees their own Yahoo-branded Mophie battery packs, gift certificates for GoGo in-flight WiFi , and, for one lucky gent, an all-expenses paid vacation.

Yahoo also tends to pack its events with celebrities, and its NewFronts presentation this year was no exception. New York Jets coach Rex Ryan, Katie Couric, “up-and-coming” rock group American Authors, and the stars of Comedy Central’s Broad City all made an appearance on-stage.

Notable quote
“We’re at a critical moment for video consumption,” said Yahoo CEO Marissa Mayer. “Users are no longer making appointments to view TV, or sitting back passively and watching. Video consumption today is interactive, cross-screen, and programmed by the user.”

The buyer’s take
Barry Lowenthal, President of The Media Kitchen, wasn’t moved by Yahoo’s new video programming, in large part because Yahoo didn’t show any of it. “The part that I liked wasn’t the video stuff. I love the magazines.  I really think they’re onto something there,” he said.

The big question
While Yahoo introduced six new programs at its NewFronts presentation last year, it made no mention of them this time around. What happened to them?