A year ago, Yahoo, struggling to turn its ad business around, kicked off a string of digital “magazines” run by big-name print journalists like David Pogue and Joe Zee.

It was an understandable attempt to pitch digital ads at high rates by making advertisers believe they could get the same quality and reach online of glossy print magazines. But a year into the experiment, advertisers are still cool on the concept, complaining that Yahoo has yet to deliver the kind of audience scale the portal used to hang its hat on.

“It’s not something that’s been on the radar,” said Alan Smith, chief digital officer at media agency Assembly, citing a lack of audience.

Yahoo started its magazine endeavor in January 2014 with Food and Tech and has continued the roll-out right up until last month, when it put out its thirteenth vertical, Autos.

Of Yahoo’s verticals launched in 2014, some have in less than a year accumulated audiences that are far bigger than traditional publishers that have been around for decades. Health and Parenting topped 17 million unique visitors in March, according to comScore. Style captured around 15 million and Movies, nearly 14 million.

But for a portal like Yahoo (Yahoo, in partnership with ABC News, reaches 130 million uniques), those are very small numbers in Internet terms. Travel was fourth in comScore’s travel-information category. Rolled up, Beauty & Style ranked No. 5 in its category, as did Parenting. The rest ranked seventh or eighth in their categories.

Yahoo didn’t make any executives available for comment, but a spokesperson countered that when non-publisher sites are excluded, several of its verticals rank No. 1 in their respective categories.

In one of the more charitable comments to come from buyers, Brian Ko, managing partner of digital for MEC, said that at least Yahoo has started to get attention. “A lot of advertisers had dissed Yahoo, but these magazines have at least brought up Yahoo in the conversational mix,” he said.

But the “magazine” approach is a questionable way to reach consumers, particularly younger ones, who are not as interested in print, said Ben Winkler, chief digital officer at OMD. He said the native ad units are attractive (OMD client Wells Fargo is running now on Yahoo Tech), but Yahoo’s ad offering will be stronger once it enables advertisers to target by intent, not just behavior.

Where Yahoo’s verticals do get points are for their design. Whether it’s parenting, style or autos, the magazines all share the same highly visual look: built on its blogging platform Tumblr, they all feature big photos, stacked tile-like on top of one another. The articles are often from other sources, though. On the homepage of Yahoo Food on Wednesday, for example, eight of the first 16 editorial posts came from other publishers (Bon Appétit, Refinery29, America’s Test Kitchen). On Parenting, eight of the first 20 came from other sources (Associated Press, New York magazine, Cosmopolitan).

Native advertising was supposed to be a central part of the pitch. Many publishers have built well-staffed content studios to create ads that don’t just look like, but read like, the actual editorial content surrounding it, to charge advertisers more than bargain-basement banner ad rates. According to a Yahoo spokesperson, its verticals have attracted the likes of Gucci, Toyota, Visa and Old Navy.

But many of the native ads on Yahoo’s verticals just turn out to be cheesy direct-response ads in disguise — an issue Digiday and others pointed out two years ago. Case in point is this one from CompareCards.com that ran on Yahoo Travel. 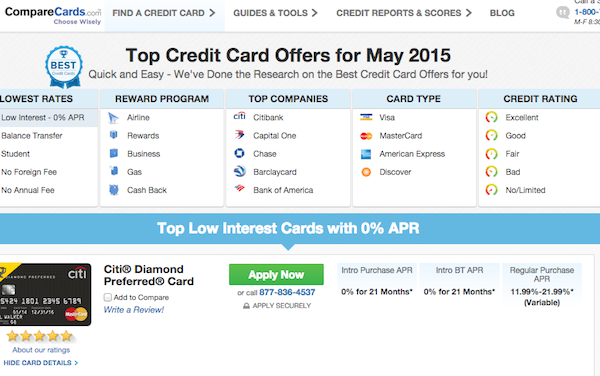 Another issue is that often the ads don’t seem to be in keeping with the content of the host vertical (in some cases because of audience targeting), as in the case of this scary viewpoint from Money Morning on the risk of World War III, which appeared on Yahoo Parenting surrounded by light family and kid fare. 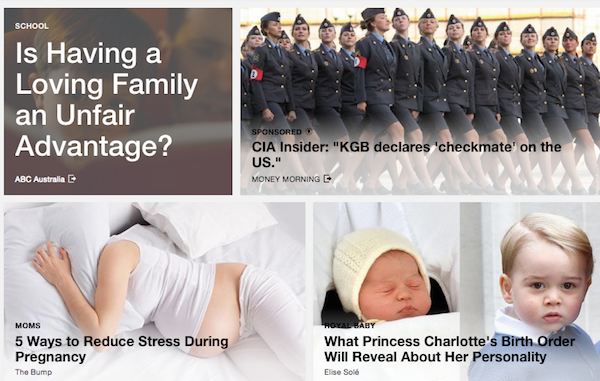 But maybe there’s another way of looking at the native ads. Yahoo may — inadvertently, perhaps — be doing too good a job with their homepage presentation. Multiple buyers said they’re hard to tell apart from the editorial content. “Some of the ads I see, you don’t know they’re ads,” Smith said.