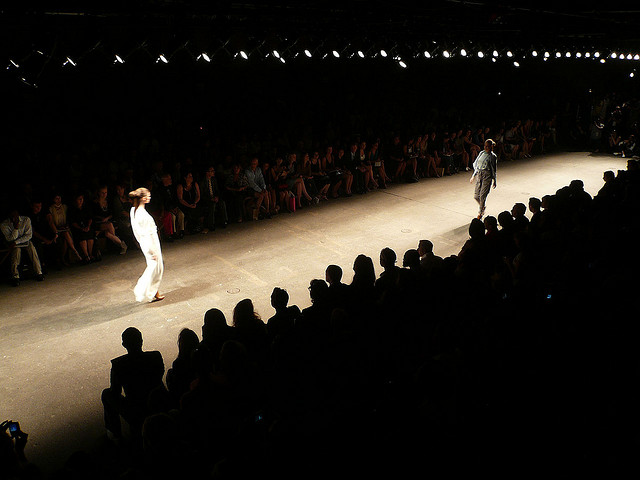 When you think of the Wall Street Journal, the first thing that comes to mind probably isn’t cool Instagram pictures of Erin Wasson sitting in the front row at BCBG Max Azria or perfectly coiffed men in dapper double-breasted suits on the DKNY Men runway. But it’s time to think again.

The prominent business-news publisher, which has been around since 1889, is truly keeping up with the digital times with its latest social media initiative: a New York Fashion Week pin board on the newly buzzed-about social sharing platform Pinterest, which just earned the honor of reaching 10 million users faster than any standalone site ever.

The Wall Street Journal’s New York Fashion Week Pinterest just launched, and it already has a bunch of up-close and behind-the-scenes pictures taken by WSJ reporters who are at the runway shows.  Emily Steel, a longtime advertising reporter at WSJ who was recently named a social media editor, explained that the project sprung from what WSJ reporters were already doing. They were going to the shows with their phones ready to live tweet and to snap pictures that they share on Twitter and Instagram, which also populate the WSJ’s Fashion Week social hub. Posting to Pinterest is part of the WSJ’s  cutting-edge social media coverage of New York Fashion Week and its larger effort to integrate the social Web into the WSJ experience.

“Pinterest is a great place for us to bring our content to new readers, a new audience,” Steel said.

This actually isn’t the WSJ’s first foray into the world of Pinterest. Before Fashion Week, the publisher already had a total of 17 other pin boards, which cover various areas of interest like beauty, cars and food.

“There were so many people pinning our stuff on Pinterest already when we first checked it out,” Steel explained, “so we figured we should figure out what content of ours people want on Pinterest and start posting it ourselves.”

The good thing about Pinterest is that the things that are pinned get linked back to their original sources. This means potentially reaching new readers in a different environment and bringing them back to your site. For example, when I click a pinned item on WSJ’s NYFW pin board showing an Instagram picture of Olympic swimmer Michael Phelps at a fashion show, it took me to WSJ’s Fashion Week hub page.

That’s bound to be attractive to publishers that are starting to wonder about the wisdom of luring their audiences to other platforms rather than their own sites.