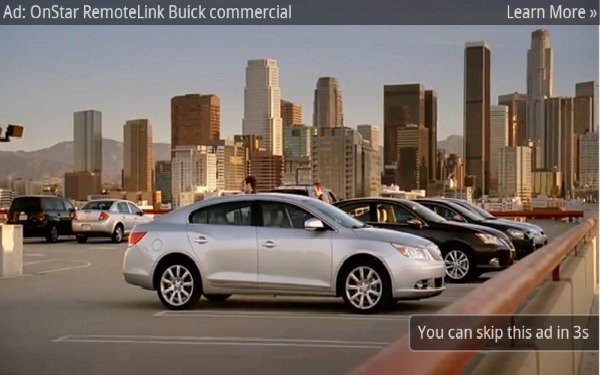 Reading brand-speak as an editor makes me weep every day for the English language. Plain English will never go out of style. Here’s some stuff to keep an eye on:

The Web video ad market is one of the bright spots for publishers. After all, video ads still command a premium, unlike the severely commoditized display market. There’s a fly in the ointment: YouTube. It’s pushing skippable video ads, with its latest move to extend them to mobile. Thanks to its seemingly inexhaustible supply — thanks to YouTube, Google showed 1.5 billion video ads in July — the Google video powerhouse is making skippable ads the norm. This isn’t exactly a route most publishers can take with their finite inventory. It stands to reason YouTube will undercut the market, teaching marketers to pay only for ads that aren’t skipped. Buyers could finally get around to insisting on pay-per-engagement pricing. (PaidContent)

Everyone wants to figure out social influence. For a relatively small startup, Klout gets a ton of attention. That’s because its Klout score plays to the egos of the egomaniacs of social media. Underneath it all, however, Klout has an interesting business: giving marketers an easy way to run “influencer campaigns.” Are Klout scores perfect? No. But it’s sure cheaper to use them to find influencers than to hire an agency to do it by hand. (All Things D)

The media-as-tech-companies theme is well-trod, including here at Digiday. What’s sometimes lost in the airy talk of how the modern media company needs to be tech-enabled is the challenge of getting those tech people. The truth is media companies are not culturally at all like engineering organizations. These are totally different mindsets. The engineer-is-God culture of Google is totally foreign to the editor-as-God ethos that built powerhouses like Conde Nast. That might be the biggest hurdle of all facing media companies struggling to keep up. (Adexchanger)

Pity Groupon. It was adopted by Silicon Valley, even though it was from Chicago, and puffed up as a world-changing tech giant. It was — and is — a giant email marketing company with a ton of sales people on the street and a somewhat dubious business model. Now, of course, Silicon Valley is disowning Groupon, pointing a finger at it for not being sufficiently tech-driven, which it never really was in the first place. My prediction: Zynga is next for the Valley to wash its hands of. (GigaOm)

At a time when it seems like everyone wants to code, it’s refreshing to see a tech person praise marketing. Great products are made through a combination of tech wizardry and marketing prowess. There’s a reason Apple’s the most valuable company in the world. Coder Rob Spectre learned just how hard it is learning the “soft” skills of marketing in a year as a developer evangelist. (Brooklyn Hacker)