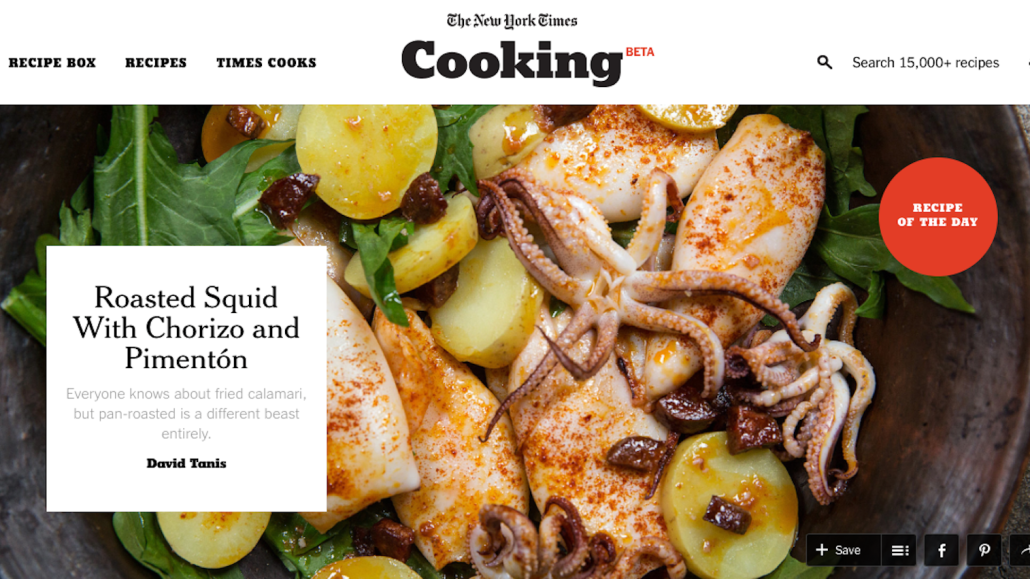 The New York Times began testing a new cooking site to a small batch of users last month, and now, its plans to charge for it are starting to take shape.

Cooking, which the Times describes equally as a site and recipe box, gives users the ability to search its 15,000-recipe archive in various ways and save them to a recipe box. The site is guided by Times food journalists like Melissa Clark, Sam Sifton and Mark Bittman. It’s being tested with 10,000 NYTimes.com users and is scheduled to launch later in the year.

This is the Times’ latest new niche product to come this year after its entry-level NYT Now news app and Opinion app ($8 and $6 a month, respectively) with an eye to growing consumer revenue. Cooking, however, is the first product on which the Times is doing large-scale, open-access consumer testing. The Times wouldn’t comment on the test.

Cooking has gotten rave reviews for its rich, photo-driven presentation, but there are plenty of other recipe sites that are free (Allrecipes, Delish, Myrecipes, to name a few), and as it stands today, the Times site is light on the features.

A survey sent to subscribers hints at how that might change once the full site launches. Access to the recipe archive and features like the recipe box would continue to be free, according to the survey.

Subscribers, meanwhile, would get “premium healthy cooking” features: nutritional information for all recipes, healthy meal plans picked by Times editors, interactive grocery lists, and the ability to sort recipes saved to the recipe box based on healthy ingredients.

The survey didn’t say what the premium features would cost but suggested that they would be free to existing subscribers.

But the big differentiator could be the access the Times provides to its food journalists, particularly those with a big social following. Bittman has 427,000 Twitter followers. Second to Bittman is Sam Sifton, with 115,000. Among the features the Times said it may add are notifications when Times cooks add recipes to the site, the ability to follow those cooks and share their recipe boxes with others, and access to the recipe boxes of celebrity chefs like Mario Batali and Marcus Samuelsson.

Food is a category that’s ripe for social sharing, so it’s not surprising that other proposed features have to do with sharing. Other possible features included the ability to see other users’ recipe reviews, share recipe boxes with others and see friends’ favorite recipes.

Ken Doctor, media analyst with Outsell, said he thinks Cooking has promise as a paid site because it’s designed for a specific use and draws on the popularity of Times cooks.

“It isn’t about recipes or the number of them,… but it is personality-driven and [for] those people who believe Mark Bittman is god and follow his advice,” he said. “What people are paying for, if they pay for it, is that presentation and the idea that this is specifically going to be used by a certain person, in a certain place and at a certain time of day. It’s a combination of convenience and unique access but not unique content.”