Who Needs Advertisers? Not Glenn Beck 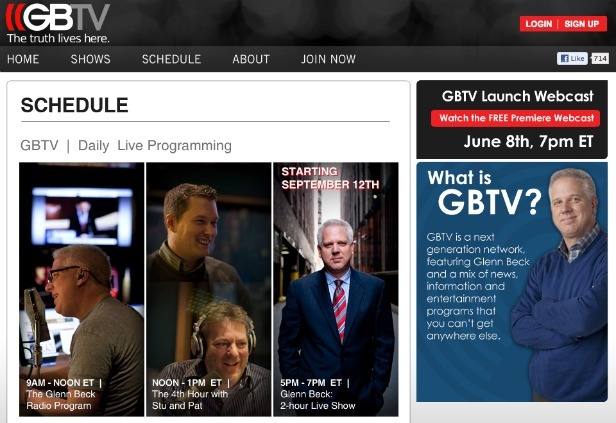 Now that he’s totally digital and independent, Glenn Beck isn’t about to kowtow to the media establishment. In fact, the fiery former Fox host doesn’t see much of a future for the media world as we’ve known it.

“Television as we know it is over,” said a feisty Beck at the Business Insider Ignite conference yesterday. “I think we’re ahead. We’re doing network-quality programming on the Internet.”

After leaving Fox, Beck started both GBTV.com, a subscription site where over 230,000 subscribers pay either $4.95 per month or $49.95 per year to watch Beck rant about the Obama administration, squirreling away gold, Woodrow Wilson or the end of the world.

Beck said that in a few years from now, he hopes to innovate beyond GBTV.com’s on-demand programming model by enabling users to pause clips, jump ahead, highlight important snippets or pull up background-related videos they may not have seen.

“It’s going to be a completely different use of the medium,” Beck said. “This way I won’t have to bore users who’ve [been watching regularly] by repeating everything. The experience is totally individualized. It’s at your speed, not the speed of the network.”

Beck isn’t just leaning on subscription, though. He’s brought on former HuffingtonPost exec Betsy Morgan to helm The Blaze, which launched last year as a right-leaning HuffPo mix of news aggregation and opinion. The site, which is free, now averages from 2-5 million unique users each month, depending on which audience-measurement source you consult. As a result of it and GBTV’s success, according to Morgan, Beck’s parent media company Mercury Radio Arts, which includes his radio and book efforts, now pulls half of its revenue from digital media.

But it appears that little of that revenue comes from advertising — and that’s unlikely to change soon. GBTV.com carries few ads, and company officials have said that advertising isn’t a huge priority. The Blaze does run ads from brands like Chrysler, Raymor & Flanagan and Range Rover, but one digital buyer said that these ads were likely not sold directly but rather through ad exchanges. Few report having heard from Beck’s ad sales team to date.

“[The Blaze and Glenn Beck overall] are a hot topic right now, but we wouldn’t recommend it,” said one buyer who requested anonymity. “The upside seems small.”

Brands would need to swallow hard when it comes to Beck. Notice just a few of the recent subject lines from his email newsletter: “Got Rape? Another disturbing ‘Occupy’ assault,” “WaPo catches Biden in rape card lie,” and “What’s communism look like? 18 people ignore dying toddler.”

“Brands that have always stayed away from Beck are not suddenly going to go there,” theorized Jordan Bitterman, svp of content and media at Digitas. “And now, the perception is, he went on his own to be his own master and enjoy total freedom of speech. At least at Fox News he had advertisers and the FCC. There was a set of standards that now you don’t have.”

And it’s doubtful that the rebellious Beck is going to change his ways to make the J&J’s and P&G’s of the world feel more comfortable.

As he put it during Tuesday’s keynote, “I’m not about politics, I’m about principles. I believe in the individual. I might piss you off, but I’m never going to disappoint you on quality.”