What Happens When You’re Made a Meme 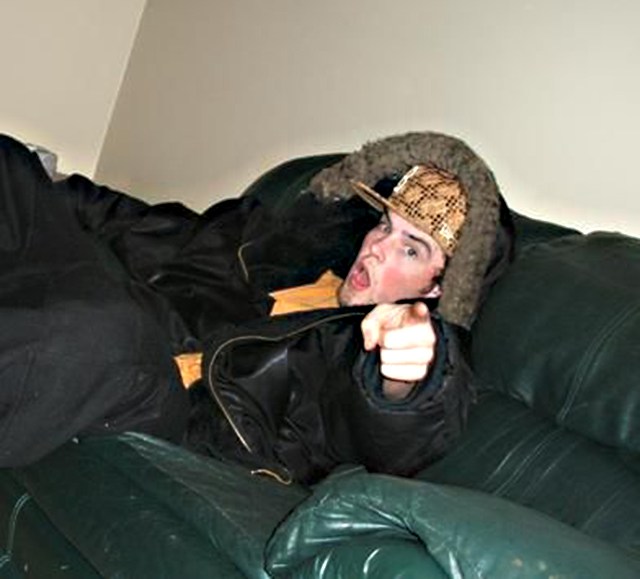 You probably haven’t heard of 23-year-old Blake Boston. But you might know him as Scumbag Steve, an Internet meme started on Reddit two years ago after a user found his photo and made it into a macro.

The Scumbag Steve macros feature photos of Boston as a wannabe thug with a backwards hat and fur-rimmed hooded jacket. The image is paired with text about scumbaggy behavior of Scumbag Steve, like, “Grandpa gets surgery/Steal pain meds.”

But behind the meme is a person. Boston is pretty amused by the whole meme thing and even went to SXSW to be part of Mashables’ meme gathering at the Mashable House. His idea for his entertainment company was largely motivated by his newfound Internet-famous status.

“The Internet made me; it must have been for some reason right? I guess I’ll ride it till the horse dies,” said Boston.

Boston spoke to Digiday about life as a meme, his mom’s reaction to her son being deemed a scumbag on the Web, Web culture and meeting Grumpy Cat at SXSW. You can follow Boston @BlakeBoston617.

How did you get turned into Scumbag Steve?
The picture was taken by my mother. She was taking a photo class, and I was thinking I’d become a rapper — like a lot of kids at the time. She put it on my MySpace, and then someone put it on 4chan. I guess it looked like the quintessential “wigger” or scumbag. From there it went to Reddit, funnyjunk, 9gag and the world. In all honesty, I agree that the picture of me is scumbaggish; I thought I was a baller!

How did you find out about your meme? What was your reaction?
My phone started blowing up along with my Facebook. I was getting tons of anonymous calls saying I was a meme, a scumbag meme. I had no idea what a meme even was. But I knew what a scumbag was, and I was heated over it. My mother cried when she saw the picture. She thought she had done something to hurt me. She hadn’t, but I get what she was feeling as I’m a father now. It was strange looking at such an old picture and having so much nefarious stuff being attributed to it. It took around two weeks; then, my boys were like, “Get over it, this shit’s hilarious.” And it is. I’ve been down with the meme and memes in general as long as they don’t disparage those that aren’t able to defend themselves like potato girl.

How do you feel about your identity being used for a viral Internet sensation?
It’s cool. I still sometimes get a twinge of anger when someone of the 25 parody accounts on Twitter or Facebook speaks for me. Especially when it’s racist.

Does the rest of your family know about Scumbag Steve? What do they think?
Are you kidding me? How could they not know? My immediate family’s is fine with it. I have a good sense of self. I’m fine, so they’re fine. We’re a strong unit. Extended family? Sometimes they just don’t get that it’s out of my control. The Internet made me. I can’t stop what’s posted.

Has becoming a meme helped you at all in other areas of your life? Do you feel at all like a mini celeb?
I don’t know if it’s helped me, but I’ve tried to turn it into a positive experience — what choice did I have? But it’s helped to promote my rapping; it’s made me a public figure; I get recognized all of the time. Biggest comment is that I’ve gained weight. Hey, I’m an American, cheeseburger-eating man now. We’re all a bit chubby, no? Girls love me, I get to go to events like SXSW and eat, drink, sleep, fly for free: It’s a good gig. 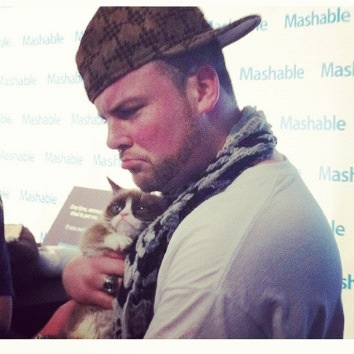 How was meeting Grumpy Cat?
The best. The cat loved me. Seriously. If you look at some of the pics of me holding her, she looks up at me. No one else had that happen. We bonded. She knew we were kindred spirits.

What do you make of the whole meme thing and viral sensations? Is it good for Web culture?
I love it, it’s funny. It’s good for Web culture because people having a bad day can go on the Internet and laugh for a few minutes. What’s better than that? They’re a feel-good public service. Just as long as they don’t hurt anyone.