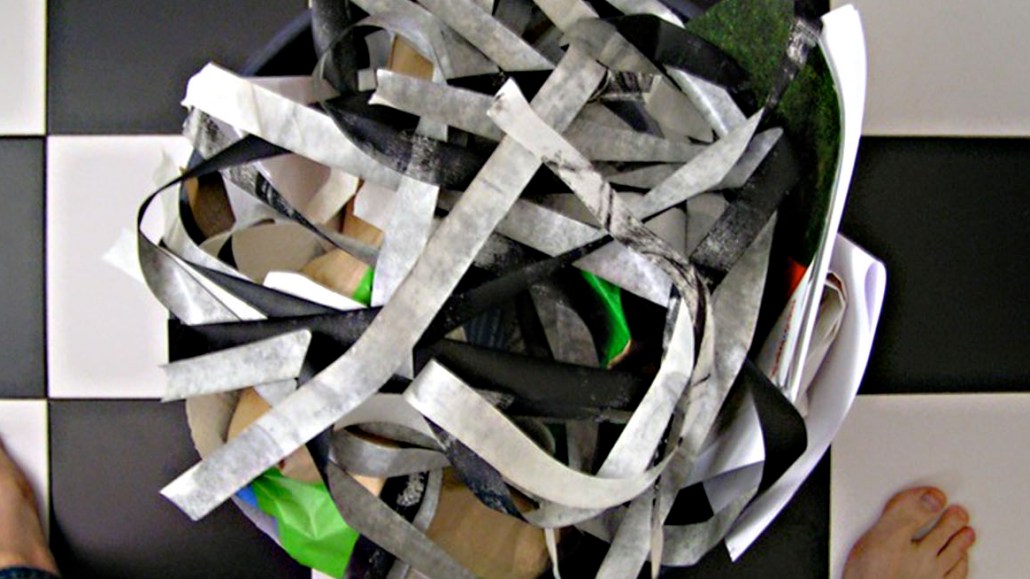 Call it the vicious cycle of online advertising. As the value of standardized Web-ad inventory falls, publishers are offsetting the declines by pasting as many impressions as they possibly can all over their sites. That helps drive inventory prices down even more.

Digiday has highlighted some egregious examples of this in action. Here’s one more, courtesy of celebrity gossip blog Crazy Days and Nights. The site serves no fewer than 21 individual IAB ad impressions on any given page, with the help of major online ad companies such as Google, Yahoo, Microsoft, AOL, AppNexus, OpenX, the Rubicon Project and many, many more. That’s in addition to contextual text ads and autoplay video ads.

In some instances, tens of display ads are stacked atop each other on the site, often for the same advertiser. I was served 18 individual ads for Zappos, for example, retargeted by Criteo. Ads from CPX Interactive also showed up in those slots repeatedly, as well as those facilitated by Microsoft, Chango and Quantcast, for brands including Citi, Mazda, Geico, Target, 1-800 Flowers and many more.

The site’s homepage loads tracking tags from a whopping 95 different ad companies. It’s a who’s who of the ad tech world. The presence of tracking tags doesn’t necessarily equate to the serving of ads, but according to data from Evidon the site served ad delivery scripts from at least 60 different firms.

This type of publisher behavior supposedly violates the policies of many major ad tech providers — it’s hard to believe this is good for users or advertisers — but the reality is they do relatively little to enforce them because it isn’t in their interests to do so. The ad tech world is often paid by transaction, so its short-term interest is in driving up transactions, whether they’re good or bad.

AppNexus CEO Brian O’Kelley said the site doesn’t pass the company’s auditing standards, and that it doesn’t allow the site via its exchange. That might be the case, but according to Evidon AppNexus ad delivery scripts were run over 5 million time in June. AppNexus might not serve ads to the site itself, but companies that license its technology do, it seems.

Some providers simply don’t have policies regarding the maximum number of ads that can be present on any page. Google, for example, says only three Google ads can be present on any one page, but it doesn’t mind how many are served from other third parties. A Google spokesperson said the company is evaluating the site.

Ultimately, Crazy Days and Nights is the type of long-tail publisher site on which exchanges and data-targeted ad companies thrive. The exchanges highlight their big-name publishers, yet don’t often trumpet the huge chunks of inventory coming from less-than-savory sources. The inventory is far cheaper to obtain than that on high-profile publishers’ sites, yet with a layer of targeting data, it’s not necessarily any less effective.

The site itself benefits, too, in the short term at least. More ad impressions means more ad money, generally speaking. According to Evidon’s estimates, the Crazy Days and Nights site served in the region of 80 million display ads in June.

Serving up 21 impressions per page creates the perfect environment for publishers and middlemen to game the system and to squeeze extra ad money from advertisers. If they’re charging on a cost-per-impression basis, it’s more impressions to charge for. If they’re charging on a performance basis, it’s the perfect opportunity to “cookie bomb” users, a tactic that involves bombarding users with cheap ads that drop cookies in an attempt to claim attribution before a purchase is made.

Sites like Crazy Days and Nights shove millions of impressions down below the fold well aware that they’re unlikely ever to be seen. They are, therefore, precisely the kind of sites viewability metrics are intended to combat. But even if they could, the question remains whether or not advertisers really want to see their ads on what is essentially a page full of ads.

For the moment, though, this type of site isn’t going anywhere because advertising on it remains efficient. Compared to inventory on “premium” publisher sites, impressions on long-tail sites cost marketers next to nothing. Everyone in the value chain wins, except for the user.

The Rubicon Project, Geico, Target and Crazy Days and Nights editor “Enty” did not return requests for comment for this story.