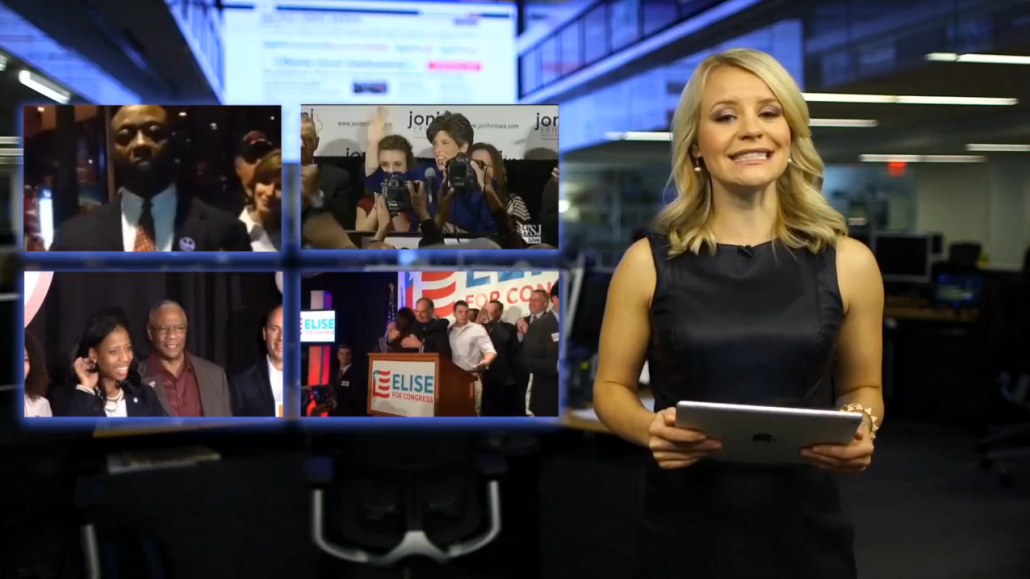 The Wall Street Journal firmly believes interactive video is the next generational leap in the digital news business, so it’s rolling out a new daily series to prove it.

On Wednesday morning, the Journal debuted its WSJ Interactive video series. Using technology from TouchCast, an interactive video platform, the Journal’s video producers can embed rich media elements inside its proprietary video player. That means viewers can click on elements inside each video to read relevant articles, watch other clips, survey real-time market data and more, all without leaving the full-screen experience of the original video.

“Everyone has been talking about bringing video to the Web,” said Andy Regal, senior executive producer of WSJ video. “But now we’re bringing the Web to video.”

Digital publishers are pouring buckets of money into video production, chasing high video ad rates as the display market slumps. The Wall Street Journal is no exception, having grown its international video team to 40 producers. Increasingly, said Regal, that team will use TouchCast’s tech to add interactive options to its videos.

“This is not just something that we just wanted to try,” he said. “This is one of the most important things we’re going to be doing in 2015.”

It’s easy to see why: Beyond the editorial value and whiff of innovation it brings to the WSJ brand, interactive videos will dramatically increase opportunities for highly profitable video advertising. When WSJ Interactive viewers click or tap on another clip, they get smacked with a 15-second mid-roll ad.

“We all know that video commands more money, so this really does have potential in terms of monetization,” said Rebecca Lieb, a media analyst at digital research and consulting firm Altimeter Group. “That said, when you click to a new channel to go deeper into a story, if that click is immediately interrupted by an ad, I’m not sure that is an optimal user experience.”

Digiday tested WSJ Interactive to determine ad frequency within the new video format. The player served up a 15-second mid-roll ad after each of the first three clicks to embedded content. After that, the video stopped serving ads for subsequent clicks, even after a page refresh, though a pre-roll ad still ran before the main video.

That ad frequency will surely discourage some users from engaging with the clips, charts and other content inside WSJ Interactive videos. But as with any other new product on one of its digital properties, the Journal will collect mountains of usage data and tweak the experience accordingly, said Regal.

“We’re looking at this as the very beginning of our efforts to innovate with TouchCast,” he said. “We know that the consumer experience will be better in three months than it is now, and even better in six months.”

There are other, less intrusive ways to capitalize on that viewer engagement, suggested Lieb, including sponsored content.

“Certainly The Wall Street Journal, like other publishers, is experimenting with native ad formats. And native ad doesn’t just mean display,” she said.

The Wall Street Journal has roughly doubled its on-site video viewership over the past year, according to comScore. Within the U.S., the publisher racked up more than 7.6 million video views on its own player in September (not counting mobile device views, which comScore doesn’t measure). That figure was 3.8 million in September 2013.

While total viewership remains a key metric, engagement has never been more important, said Regal. And interactive video is, practically by definition, some of the most engaging content around.

“I can create a three-minute video, but I can potentially get 10 minutes of engagement time, because people are going to be reading an article, checking out an infographic or looking at a real-time stock chart,” he said. “Marketers will want to be associated with just that kind of content.”

Other publishers are beginning to experiment with interactive video, including BBC News. The British publisher started using TouchCast this summer for a variety of stories, including this report on Ebola. But the Journal is committed to doing at least one interactive video every single day.

“From start to finish, it takes three or four hours to create and publish an interactive piece of journalism, which is really exciting for us,” said Regal. “Our goal is to get it out each day before lunchtime, which is when our traffic starts to spike.”

Interactive video could prove a better fit for the Journal than for other kinds of publishers, given the Journal’s financial and political focus, said Jackdaw Research analyst Jan Dawson.

“There’s only certain kinds of content that people want to engage with,” said Dawson. “Financial content is probably a better fit for that format than entertainment content, where you don’t want to have to participate too actively.”

It’s also a relatively low-risk proposition for the Journal, said Dawson. If it doesn’t take off, the Journal will surely be disappointed, but that would be a far bigger blow to the tech vendor who invested millions of dollars in its platform.

“Nobody really has done this in a big way so far, so somebody had to be the first to try it out,” he said. “If it doesn’t work, it’s fairly low-cost [for the Journal] … but if it does work, there’s a huge potential payout.”