How Vessel will fare in a YouTube-dominated world 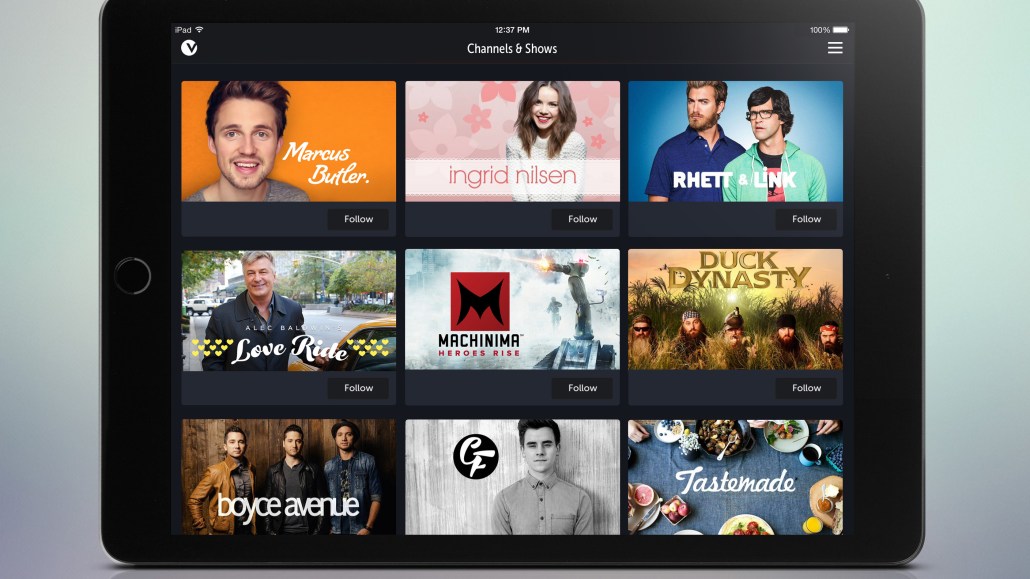 Vessel officially unveiled its offering on Wednesday, a platform around “the Web’s best short-form videos,” the type of content top YouTubers regularly create. The company is courting those creators, promising them lucrative returns relative to their total video views on the platform.

Vessel has paid top dollar to secure the participation of select YouTube stars. The company doled out nearly $500,000 to musical comedy duo Rhett & Link to get them on board, and has inked a number of additional six-figure deals with top YouTubers, according to a source. One multichannel network working directly with Vessel has secured nearly $3 million in deals for early, year-long access to some of its talent’s content, according to a source.

On paper, the economics for creators are very appealing. Vessel will share 60 percent of subscriber revenue with creators, divvied out according to the amount of time subscribers spent watching early access content. During that exclusive period, creators will earn approximately $50 per thousand views of their videos, Vessel estimates. They’ll also get 70 percent of all revenue from ads that run against their videos, compared to 55 percent on YouTube. And there’s a referral program that pays creators for each paying customer they drive to Vessel.

Like Hulu, Vessel will offer both free and paid tiers, both of which will serve ads. Video makers who use the platform can still upload their videos to other sites, including YouTube, but they have to hold off for at least 72 hours, Vessel’s minimum exclusivity window. That’s Vessel’s whole value proposition for subscribers: Pay $3 a month and get early access to “the best of the Web from both new and traditional media.”

Digiday turned to a group of Web video executives, analysts and stars to assess the prospects of Vessel.

Will Vessel be able to attract subscribers?
The general consensus: It’ll be tough. Mom and pop may pay for Netflix because they use it themselves, but it’s their kids that know and love all the YouTube stars.

“It will be very, very difficult [to build the subscriber base],” said Dave Morgan, CEO of Simulmedia, a digital ad platform for linear television. “People’s time and wallets are finite, and there is an awful lot of competition in this category, even though it is still quite new.”

“The very generation that’s so into YouTube is also notoriously loath to pay for content services, using ad-supported Spotify, YouTube itself, Hulu and so on to avoid paying for stuff,” said Jan Dawson, chief analyst at Jackdaw Research. “They don’t necessarily want to sign up for monthly subscriptions at all, so it’s a new model for them. I suspect many of them will be perfectly content to wait for the content to show up in other places rather than pay for it.”

Can Vessel lure creators away from YouTube?
Vessel has already shown that big checks get big names. But to get a mass of creators on the platform, Vessel needs to build a big audience and secure a steady stream of ad deals, so creators know there’s real money to be made.

“Even with revenue splits that seem generous toward content creators relative to current standards, Vessel faces an uphill battle in trying to lure talent and viewers away from YouTube,” said Paul Verna, a senior analyst at eMarketer.

One emerging YouTube star, Mitch Lewis of The Kloons, a comedy trio with 212,000 subscribers, said he’d consider working with Vessel in the future, but for now, it makes more sense to keep focusing on YouTube.

“For us, our audience is growing on YouTube and we want to keep building that momentum for our channel. We also have found YouTube to be incredibly supportive of our goals and as we’ve invested more in our channel, they have continued to invest more in us.”

What does Vessel mean for multichannel networks?
The impending launch of Vessel is good news for MCNs. Vessel has proven willing to work directly with MCNs and pay hefty sums for access to their creators’ videos — and more distribution options never hurt.

“I see the potential for brands like Maker Studios and Fullscreen Media to start shifting some of their content away from YouTube,” said Dawson. “They have the kind of critical mass behind some of their brands that they could make the transition if it’s financially worthwhile for them to do so.”

In the short term, MCNs that have exclusively focused on YouTube will miss out on the early action. But they won’t ignore Vessel and other platforms for long.

“The rise of these new digital platforms is increasing the importance multi-platform sales and operational capabilities at the MCN level,” said Paul Kontonis, executive director of the Global Online Video Association.

What’s the hubbub about Vessel’s interface?
Everyone we spoke to who has seen Vessel first-hand heaped praise on the platform’s design. One person described it as “sticky,” another as “gorgeous.”

“The interface looks fantastic,” said Janet Brown, CEO of FilmBuff, a film and video distribution company. “It’s really appropriate for the shorter content formats and the millennial audience. There are so many options to navigate around and dive deeper. There’s great discovery capability built right into it.”

What should advertisers make of Vessel?
Vessel has signed up a few launch advertisers, including Geico, Gap and Frito-Lay. But the “premium” video environment won’t mean anything to advertisers without an audience.

“It all depends on whether they can get the audience,” said Simulmedia’s Morgan. “If they don’t, advertisers shouldn’t and won’t make anything of it.”

For now, Vessel has already won one battle: The world’s top advertisers are paying close attention.

“Competition breeds innovation, and as the digital video space continues to grow rapidly, we are constantly seeking new models to experiment with and learn from, for all our clients,” said Adam Shlachter, chief investment officer at DigitasLBi. “Video is not so homogeneous that it’s ‘one-size fits all,’ so we’re curious to see what audience this new platform best serves.”