Unilad’s ‘serious’ videos are getting millions of Facebook views 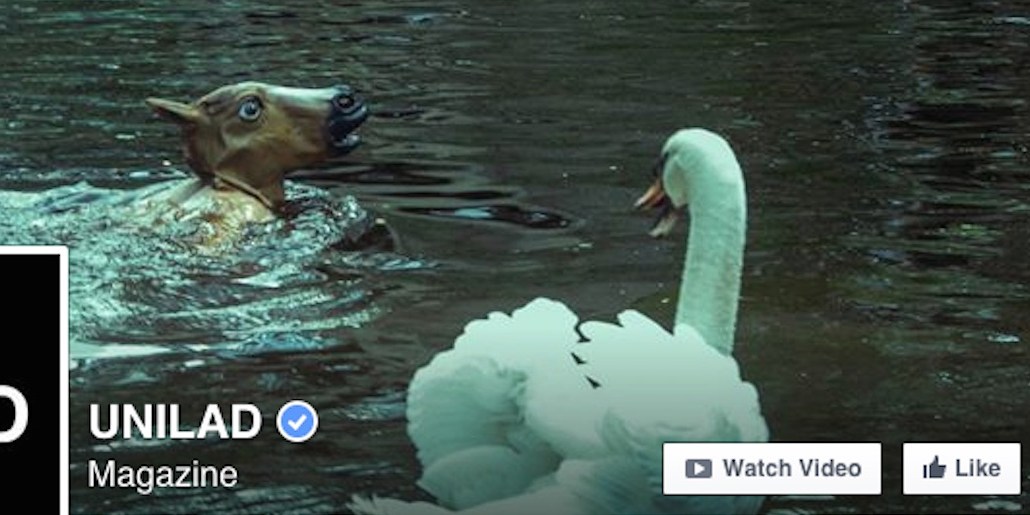 Unilad is looking to shed a seedier image in favor of a more serious look.

Up until a few months ago, Unilad’s video content was pretty much exclusively the off-beat kind designed to make people laugh, specifically Generation Y. There was a greater volume of  “These Classic Kids Shows Were Trippy AS F*ck” and “Things Your Dad Doesn’t Understand About Modern Culture.”

This changed in November when it posted a Facebook video on the Million Mask March protest in London. It gained over 2.6 million views, 14,500 shares and over 2,000 comments. “This made us realize we can deliver another style of content and still continue the bread-and-butter funny stuff,” co-founder Liam Harrington told Digiday.

Since then, its video team has grown from one guy, Chris Goodson, to 12 people in the U.K. (eight in London and four in Manchester).

Harrington concedes that the issues it wants to tackle, like education, homelessness and mental illness, aren’t associated with viral fare and millions of views. Even so, that’s the route it’s taking. It has most recently teamed up with Bite the Ballot, an organization encouraging young people to vote, to create five videos on topics ranging from war, education, housing, mental illness; on average, these have been gaining around 700,000 views.

Just over half of the video content on the site is licensed from its followers or companies like Jukin Media; the rest is original, and Unilad plans to ramp this up in the next few months. Original content includes its branded video. The video featured below was for the upcoming Robert De Niro film “Dirty Grandpa” and has got nearly 3 million Facebook views.

But it’s not just the views; the site is getting people talking. Harrington claims that Unilad is the most engaged Facebook page in the world on a post-by-post level. Looking at its closest competitor, Lad Bible, data from analytics firm Newswhip shows that in the last six months, Lad Bible posted twice as many videos to Facebook as Unilad (1,200 to 650, though it’s worth noting Lad Bible’s video team several months ago was more than 30 strong). But Unilad’s posts have been getting twice as much engagement — likes, shares and comments. Its average engagement per post was reaching 95,000, compared to Lad Bible’s 59,600.

“People are talking about the content in the comments,” said Harrington. “The feedback is often people thanking us for creating it and asking for more. Mainstream media doesn’t always tackle the issues Gen Y want to hear about; that’s really satisfying for us.”

Outside of video, Unilad has overtaken Lad Bible in its very own playground, with 11.5 million followers to Lad Bible’s 11 million. News may be about the newsfeed, but ultimately what’s important is bringing people back to your site in order to monetize them. Globally, Unilad is getting more Facebook referral traffic than Lad Bible.

“Across all our brands and channels we have a social following of more than 31 million,” points out Mimi Turner, marketing director at Lad Bible. “Our job is to make sure we are serving all those audiences with the content that works best for where they are. We recently just passed 1,000,000,000 loops on Vine, we are getting a couple of million views a day on Snapchat and Instagram is growing incredibly fast. More than 90 percent of our audience is on mobile so I don’t think you can read too much into desktop referrals.”

Building up audiences through viral off-beat stories then turning to more serious content is a tried and true tactic employed by BuzzFeed and Lad Bible before Unilad. SimilarWeb has ranked last year’s top U.K. news sites in terms of pageviews as such: BuzzFeed (11th), Lad Bible (19th) and Unilad (40th).

“News brands live and die in the newsfeed; now it’s all about standing out,” said Daniel Price, head of social operations at Lost Boys. “Guys like Unilad intimately know how to package their content. They are starting to converge too, while new media organizations are writing more serious content, more traditional ones are producing more viral content.”

“At the moment, we’re really focusing on ourselves,” said Chris Goodson, co-head of video and Unilad. “We’re Gen Y creating content for Gen Y; everyone is young and hungry, and that gives us the ability to not need to focus on other companies.”

Although Price said it still has some ways to go if it wants to compete with Lad Bible for ad dollars. “I can see why they kept the name,” said Price. “They built this thing, and they have some brand recognition, but they are going to have to do more work; the Lad Bible has changed in mind. I would struggle to recommend a Unilad for any kind of paid media.”