Why TV is still beating digital in the UK, in 5 charts

The TV advertising spend in the U.K. is at an all-time high, according to new data. This comes even as TV viewing has declined over the same period for the first time in years. As counter-intuitive as that may seem, TV’s dominance as a marketing medium still holds in the U.K. for one main reason: its reach, impact and efficiency is unrivalled, even in the Internet age.

Here are six charts that demonstrate why the British TV market is as strong as it is.

TV viewing is down by 4.5 percent, but it still dominates video consumption
The number of viewers who watched more than four hours of TV a day in 2014 fell by 7 percent over the previous year, according to the Broadcasters’ Audience Research Board (BARB). The decline in usage by these heavy TV users accounts for 95 of the dip in the overall TV viewing average. TV marketing body Thinkbox suggests factors like increased employment have reduced that figure, as has the consumption of some on-demand content which falls outside of BARB measurement rules.

Meanwhile, though online video portals like YouTube and increasingly Facebook have been embraced by a large percentage of the British population, the amount of attention they command is still small compared to TV. Here are the latest statistics from U.K. media regulator Ofcom: 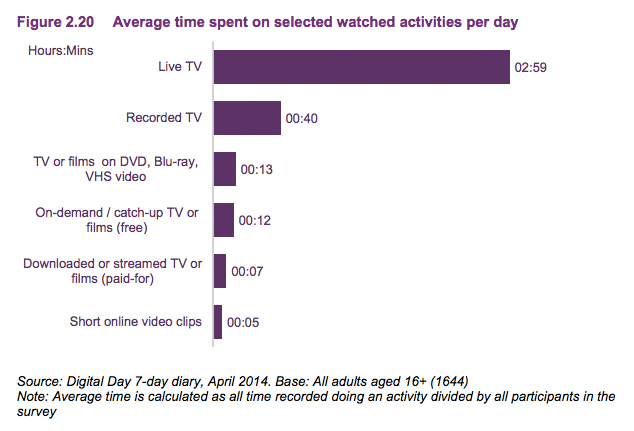 The U.K.’s aging population skews the averages
The U.K. has an aging population: the number of Brits over 65 grew by 17.3 percent between 2003 and 2013 to account for 17.4 percent of the population. Ofcom statistics show they spend approximately twice as much time with TV content as children and young adults, which in turn masks changes to viewing habits in younger people. 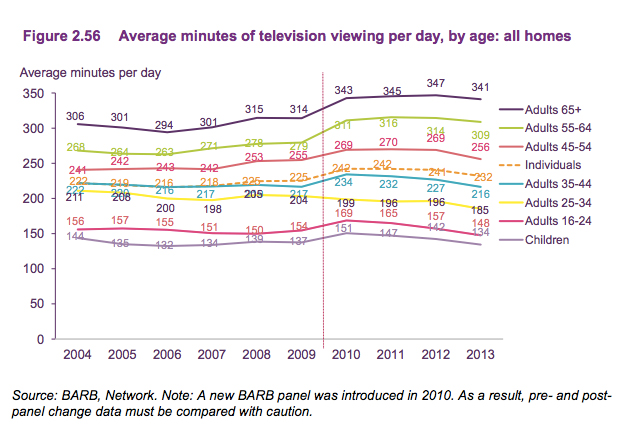 That said, younger people don’t appear to be falling out of love with TV content. Ofcom says convenience is the primary reason for young adults to shift their habits. Its research also shows 16-34 year-olds have been shown to be a third less likely to think TV programming has worsened over the last twelve months than the average Brit.

TV advertising grew to £4.91 billion ($7.42 billion) in 2014 anyway
A combination of data from the Advertising Association from 2000-2010 as well as data collected from broadcasters themselves by TV industry marketing association Thinkbox from 2011-2014 plots the upward trend in TV spend in recent years.

U.K. TV advertising spend comes from relatively small group of companies
There were 800 TV advertisers in the U.K. in 2014, meaning there’s a high concentration of spend among big businesses compared to Internet advertising overall, according to Thinkbox. The top 10 advertisers bought billions of impressions through TV companies in 2014. They have good reason to: TV ad prices in 2014 were some 41 percent lower in real terms than 20 years ago, meaning TV is still an efficient medium in which to reach a large audience. 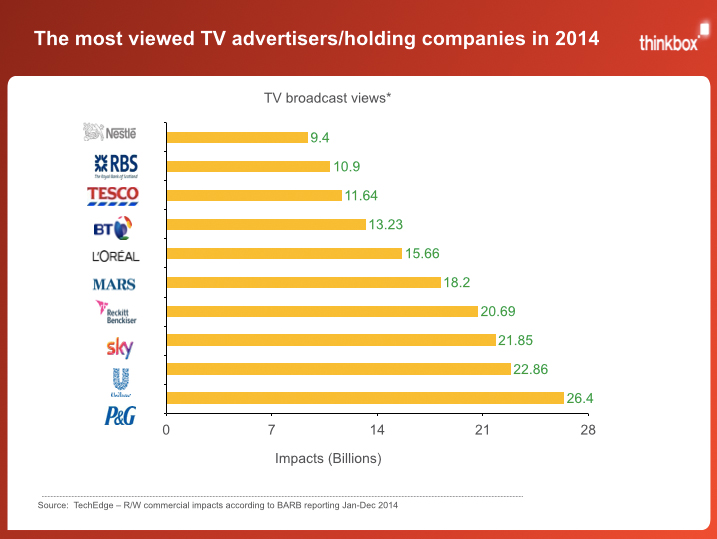 Though users might be more distracted than ever thanks to smartphones and tablets, the UK TV viewing population watched an average of 2.65 billion ads a day in 2014. That’s an average of 45 ads a day per viewer.

Internet video ad spend will account for 20 percent of total U.K. video spend by 2016
Figures from a study by the IAB U.K., PwC and Enders Analysis shown below demonstrate how entrenched U.K. advertisers’ love of TV really is. Furthermore, this projected growth in Internet video advertising doesn’t necessarily mean linear TV budgets will shrink. Speaking to Video Advertising News, Matt Mulderink, SVP, director of mobile and social, product and partnerships at Starcom Mediavest said online video budgets are more likely to come from digital than TV. “Sight sound and motion matters,” he added. “The need for video-based storytelling is here to stay.” 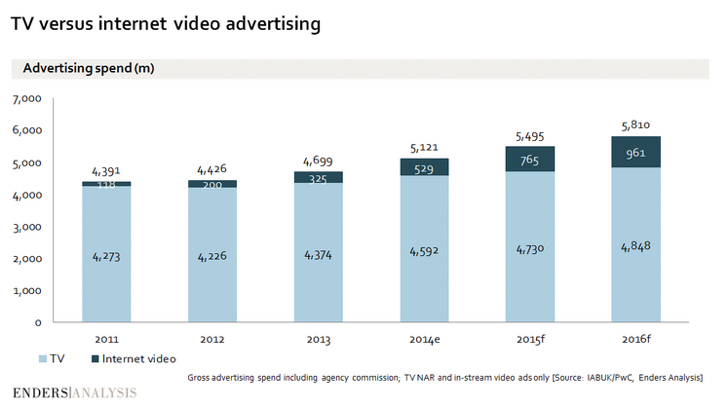