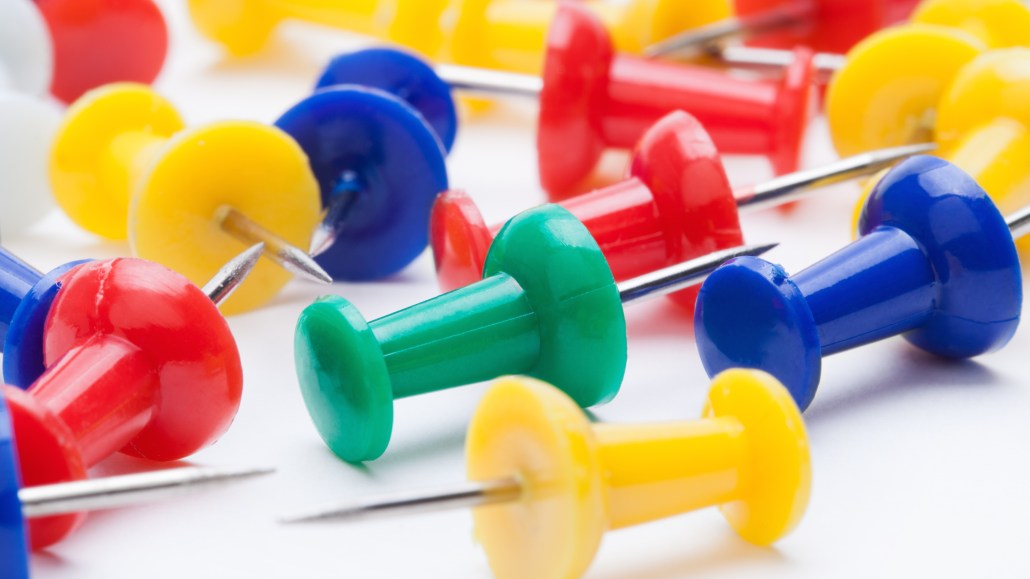 Pinterest has had a bumpy start to the year. On Jan. 15, research firm Forrester released a study called “Pinterest Is Not Ready For Prime Time” that said Pinterest wasn’t living up to its marketing potential. Pinterest’s head of operations Don Faul called the report “surprising” at an event hosted by Ad Exchanger in New York last week, adding that Pinterest ads perform better than those on competing platforms.

Now, new data supplied by Ahalogy — a firm that provides Pinterest analytics and marketing software to brands such as Kraft and Visa — brings some much needed clarity to marketing on Pinterest.

Below, a look at what we’ve learned about Pinterest as it’s tried to scale its ads business over the past 15 months, and make its pitch to male users.

Pinterest’s man troubles
Pinterestinitially rose prominence among “women in the midwest who were passionate about home decor and fashion,” Faul said in an onstage interview on Thursday. And while this a lucrative demographic — marketers are quick to point out that women control a majority of consumer spending — it’s created the perception that the platform is exclusively by and for women.

Pinterest had the most female-skewed audience of all the major platforms as of last February, with a user base that was 71.4 percent female, according to comScore. And that gender schism persists — the percentage of women users was still hovering around 71 percent in December.

Faul is well aware of the gender imbalance is focused on bringing (and retaining) more men to the site. Pinterest is working on ways to serve men more masculine content — think photos of man caves and Air Jordans instead of wedding venues and muffin recipes — when they create accounts. To that end, Pinterest acquired startup Kosei, which focuses on serving users personalized product recommendations, last week.

And although he conceded that Pinterest needs to improve with men, he did note that there are “more men active on Pinterest than the combined circulation of GQ and Sports Illustrated.”

Don’t call it a ‘social network’
Pinterest has many of the characteristics of what we’ve come to associate with social networks: User profiles that are curated just so, a way to follow and share posts with other users, and content culled from elsewhere as opposed to created in-house.

But Faul made a point to distance Pinterest from more “traditional” social platforms on Thursday.

Not for real-time marketing
Correspondingly, Pinterest functions uniquely from the other social platforms it’s often lumped in with.

One of Pinterest’s most distinguishing characteristics is that its users are more likely to pass along other users’ posts than create their own, original entries. A vast majority (80 percent) of the pins users see are in fact “repins,” whereas only 2 percent of the tweets viewed on Twitter are retweets, according to Ahalogy. (Twitter could not confirm that figure.)

Real-time sharing is noticeably absent from Pinterest and its content is decidedly more evergreen. Many Ahalogy clients see users engage with pins that were posted a year ago. This recipe for buffalo quinoa bites received 750 repins last month. It received less than 50 repins when it first posted by Kellogg’s 49 weeks ago.

Pinterest users are also quite proactive. Strapless dresses are pinned twice as often in the winter (not strapless dress season) than in the rest of the year, and Halloween starts trending in late August and early September, according to Ahalogy.

Untapped potential for marketers
Despite a multi-billion dollar valuation and interest from top brands, Pinterest has not delivered on its promise as an ad platform, according to the report by research firm Forrester.

But Faul called the report “surprising” and defended Pinterest by saying its ads receive greater organic reach than on any other platform.

One of the possible reasons is that brands aren’t using Pinterest enough. More than half of the “top” brands on Pinterest haven’t posted in the past week, according to the Forrester report. Coca-Cola hasn’t posted in six months despite having 10 Pinterest boards.

Ahalogy meanwhile found that on Pinterest, it pays to be prolific. Brands that actively pin images, recipes and articles from other publishers see four times as much traffic to their own sites.

To be fair, Pinterest is relatively new to advertising having only started pitching agencies last spring. And Forrester predicted a bright future for Pinterest — it will one day drive more sales than Facebook and Twitter, the report said.